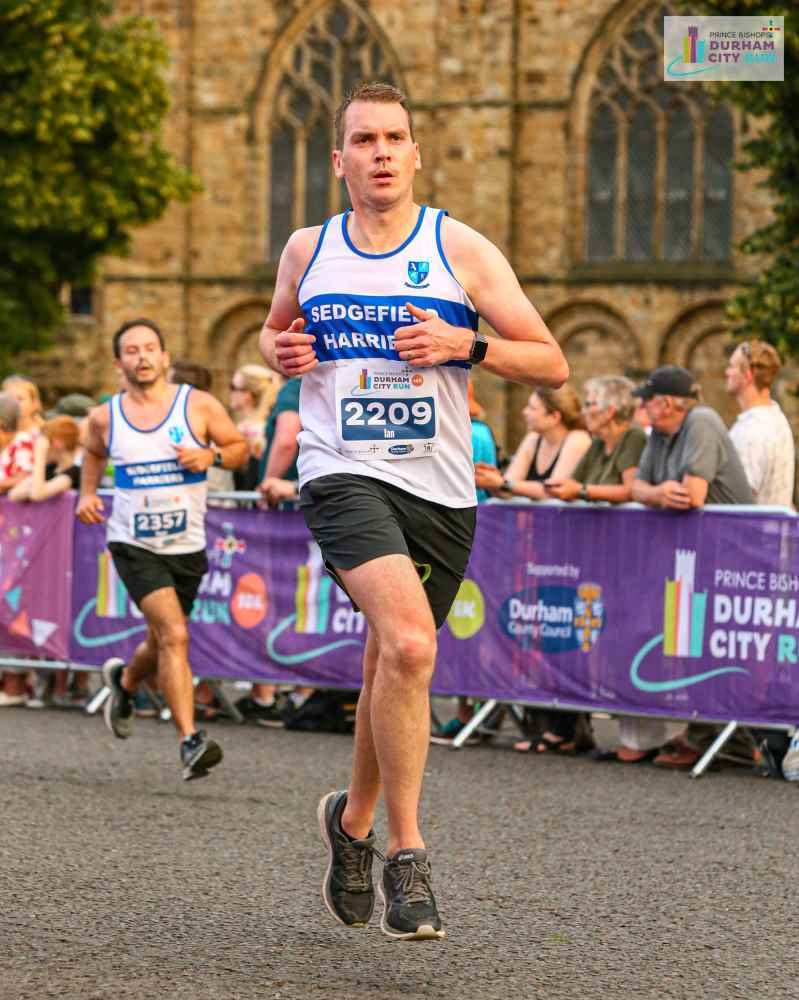 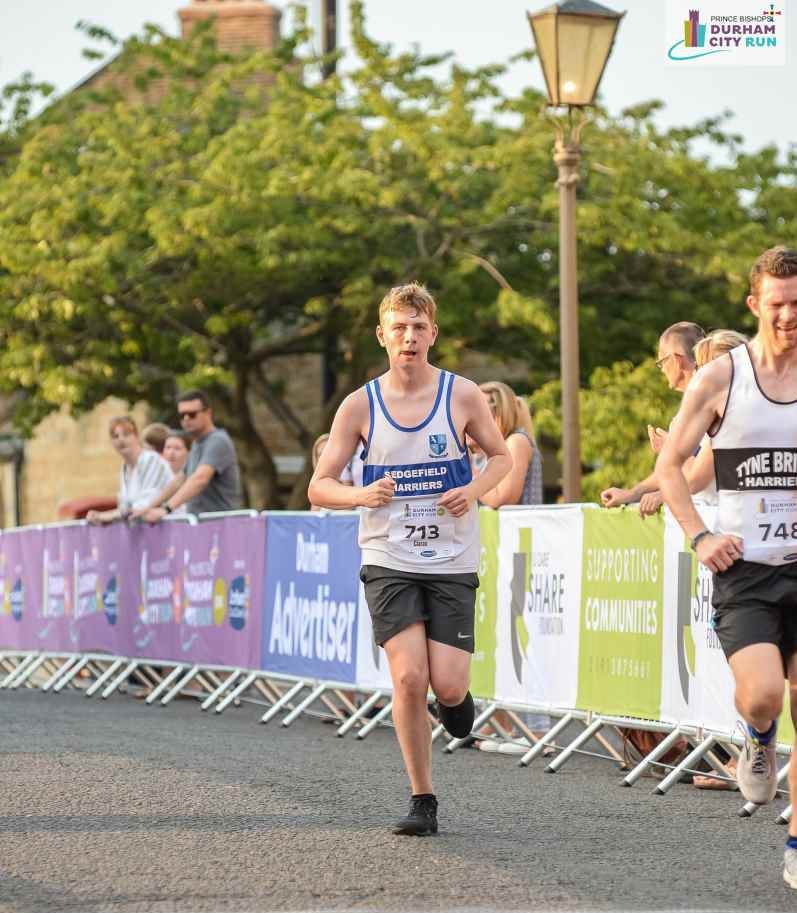 A very warm night in the market square, the Durham City 5k takes a picturesque yet hilly route around the historic city. A fast start through market Square, the route eventually takes a narrow path down towards the River Wear and a looping course then takes you past the Raddison Hotel and as you continue down the road you come back on yourself to the delight of a water station and a shower in the intense heat of the night.
The course then takes you across the bridge towards the Freeman’s Quay gym and Durham Sixth Form Centre. Here a left turn is taken out of the car park and the tough bit comes. The long, steep and dragging hill takes you back towards towards the market square and then finally, the sting in the tail, the finish takes you up the steep incline towards the cathedral where the finish lies. A very tough course to get a personal best on, but aside from that one of the nicest runs of the summer.

Having completed the Durham City 10K on the Thursday night, on possibly the hottest day in the world, my wife Helen and I then took part in the “Run Like a Legend” 1-mile event the following day – Friday 26 July 2019.

We’d spotted this new event when signing up to the 10K and thought it would be worth investing the £5 entrance fee to take part and see if we could emulate Sir Roger Bannister in breaking the 4-minute barrier! Not a chance! No, having never run ‘just a mile’, neither of us had any idea how ‘fast’ we could complete it in, so we were both intrigued. Plus, it was only 5 minutes down the road.

The route was an accurately measured 1 mile course along the banks of the River Wear – starting outside the Boat Club / Whiskey River (beneath Elvet Bridge), across Baths Bridge, down to the bandstand alongside the Racecourse and back. 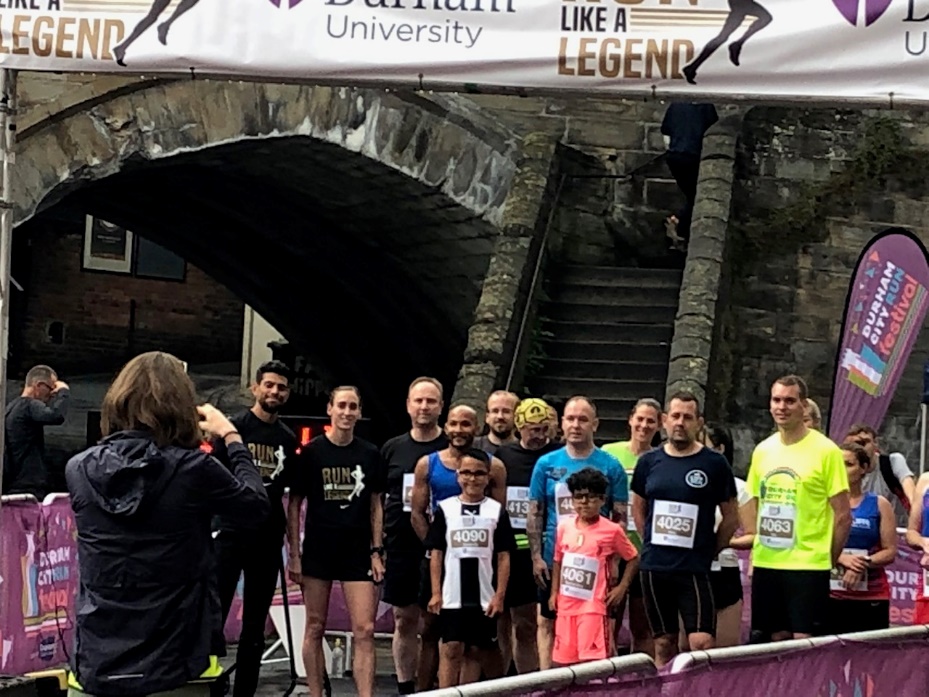 Able to book in advance, we picked the 4pm and 4:20pm time slots (slots were available every 20 minutes throughout the day from 10.40am to 5pm) so we could cheer each other on after work and so Cameron could along too!

Throughout the Friday, the weather remained sweltering – the journey to Durham being completed with air con at full pelt. Having arrived and parked up, we made our way to the start, by which point our friends, “thunder” and “lightning” (no, not some quick runners!) had made an untimely appearance…

Helen collected her number and electronic chip timer as we watched the immediately prior wave of runners complete their efforts. Having spotted a few people we know who’d just finished, we asked how they’d got on – times of 07:20 and 08:47 were quickly shared which didn’t ease our tensions!

The time quickly came around to 4pm and Helen was off (alongside another 6 or 7 runners). Unfortunately, not long after the start, heavy rain joined the aforementioned weather conditions, so, having collected my number and chip timer, Cameron and I quickly took shelter!

Helen returned in a very impressive 08:37, despite the greasy conditions, and was delighted with her time. Having seen Helen and others do so well, I was now feeling quite anxious. This was only heightened when the next wave was delayed by 20 minutes whilst the storm passed due to safety concerns. Having made my way to the start line, I then spotted Laura Weigthman – so only the WOMENS BRITISH ROAD RECORD HOLDER at this distance (4:17 for those interested!!!) – limbering up next to me! She asked a few others in the wave what their anticipated times were – “06:25”, “06:00”, “05:48” – at which point the only thing I could think was “…bl**dy hell, I’m going to be last here!” Luckily, Laura resorted to just giving us the countdown to the start and then we were off… 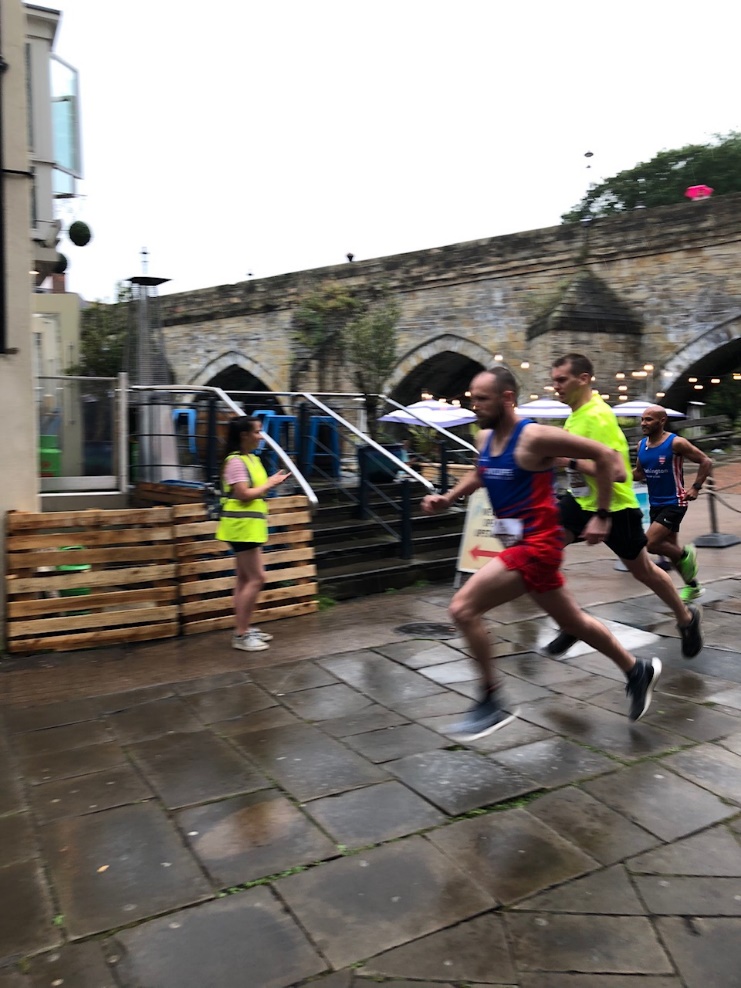 After a quick start, Baths Bridge was soon in front of me and I had ended up tucked in right behind a guy from Aycliffe Running Club (the same guy who had announced he was trying to beat his 05:48 PB! Ridiculous! A few things passed through my mind – “…going too fast” the main one, though that was quickly followed by “…just stick with him”. Not understanding what pace over this distance I could sustain / achieve was a strange feeling too, but somehow I did manage to stick with him. As we headed back over Baths Bridge, he had managed to pull away a little although I did manage to reduce this to a couple of yards again when we reached the buildings and the final 50m!

As he appeared through the narrow gap toward the finish, Helen was just about to start looking for the camera and so was very surprised to see me appear right behind him – so no finish line photo. I surprised myself too – I’d initially thought I may be able to achieve 06:30ish so to finish in a time of 05:51, I was delighted! 28th place out of 198 efforts over the course of the day (behind a couple of really speedy Harriers in Ciaran and Chris Lines who finished 4th (05:12) and 7th (05:17) respectively – very impressive gents!). The guy from Aycliffe achieved a PB too (05:47)!

If this event is on again next year, I would definitely recommend it to other Harriers. The £5 entry fee was great value. The route was marshalled throughout, electronic chip timed, and we were each given a Nike t-shirt, a fantastic medal and the same goody bag as we’d received following the 10K event upon completion (although the lentil chips remained unopened on this occasion – yuk!).

Other Photos from the festival: 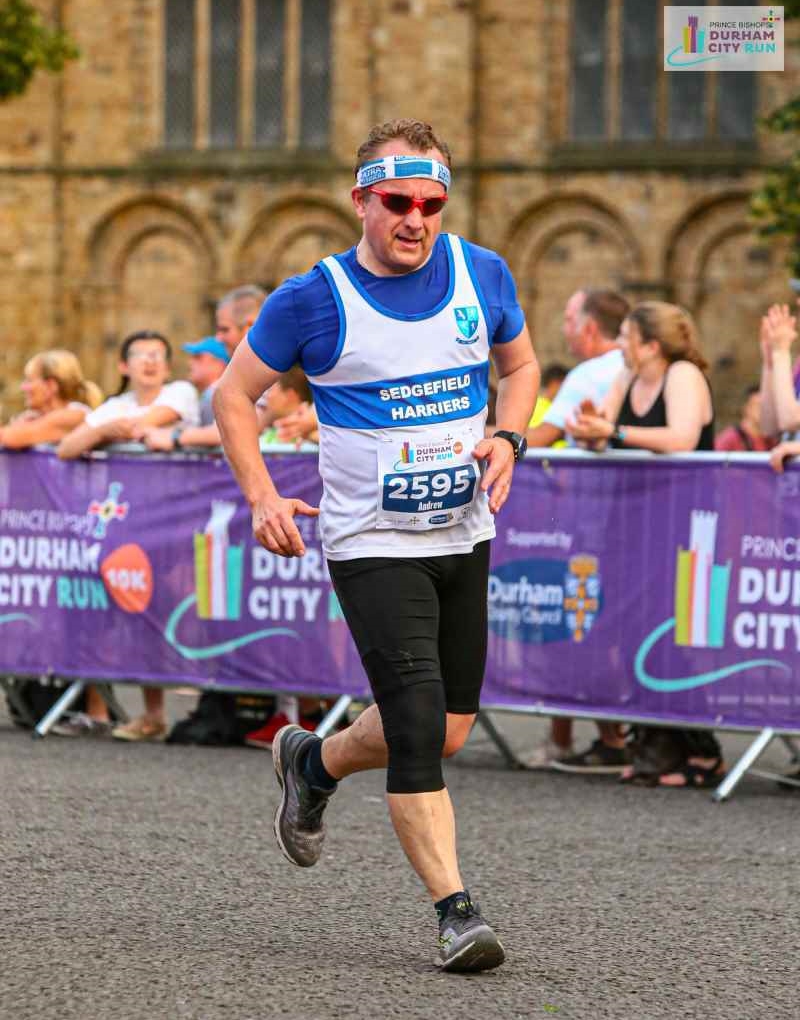 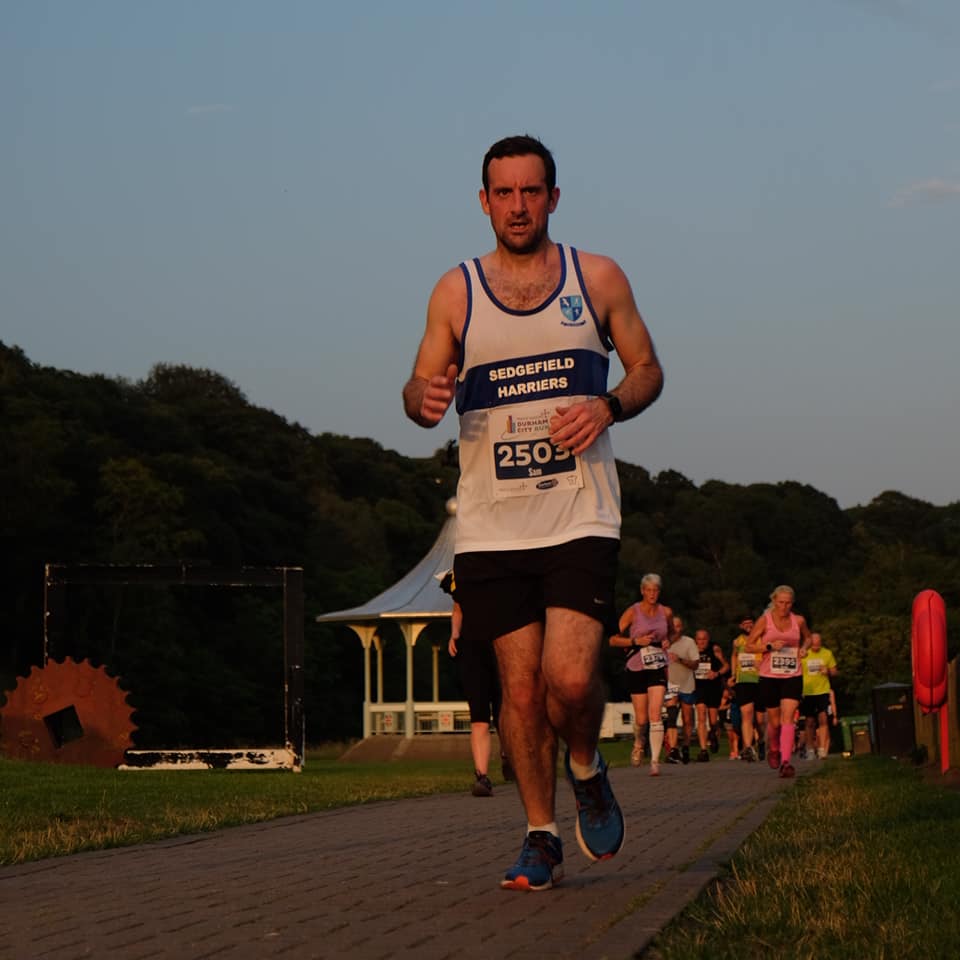 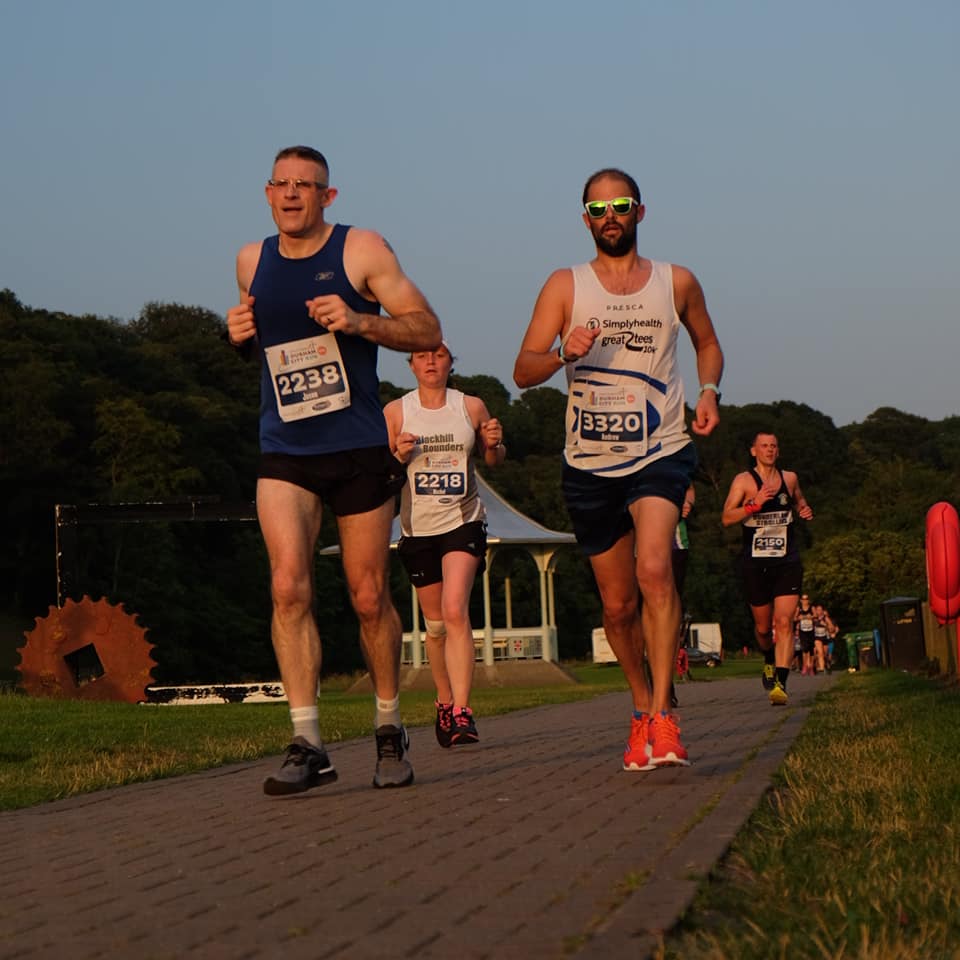 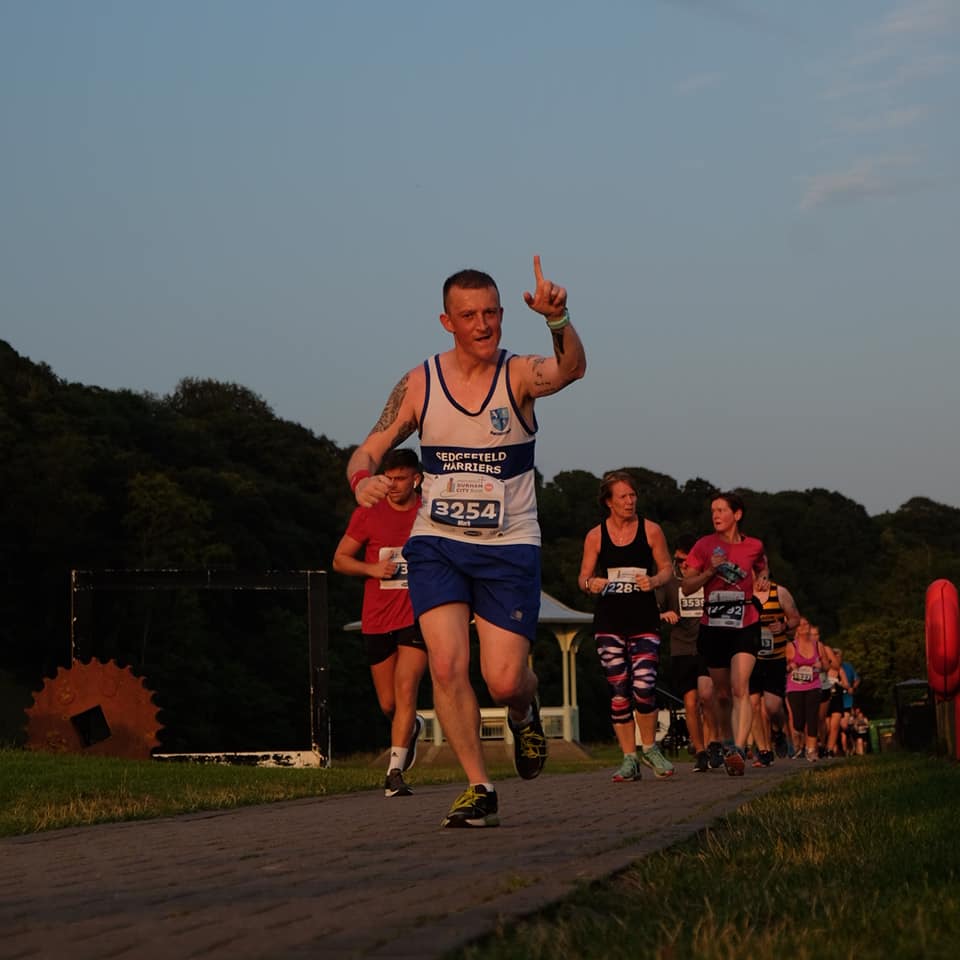