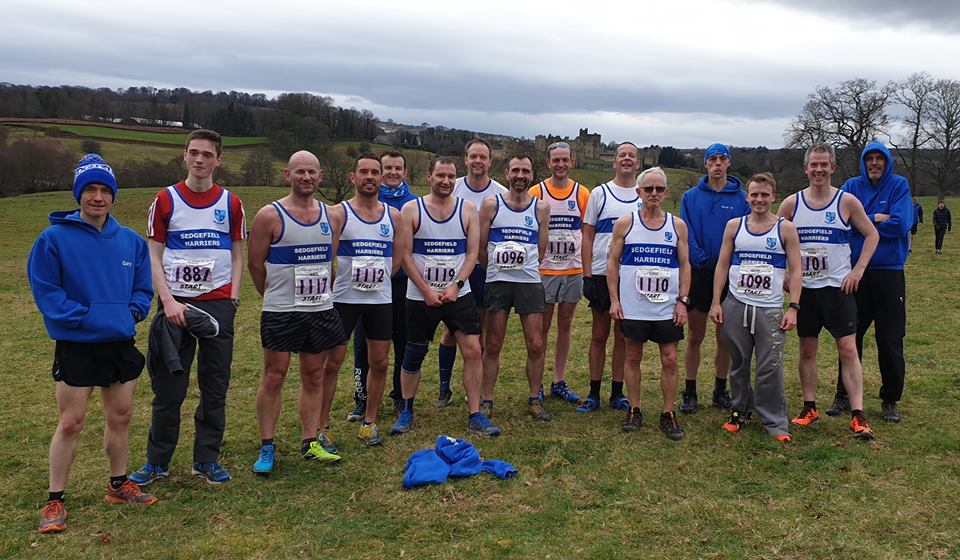 The final cross country race of the season and the moment of truth for the Senior Men’s team. A strong performance and favourable result and we might just avoid relegation to Division 3.

My race day preparation was as meticulous as ever, the long drive to Alnwick required an early start to allow time to acclimatise to the race environment. At 1.35pm I arrived at Alnwick Gardens and used the opportunity to race from there to the Harriers Tent in time for my race 15 minutes later as my warm up! Nothing like getting the adrenaline pumping! I opted to wear trail shoes, not because the course was dry with a gravel/hardcore twist but because I forget to pack my spikes!

Harriers converged as close to the start line to gain an advantage, especially over our challengers for Division 2 status – Low Fell & Saltwell.

Facing the impressive Alnwick Castle, the gun signalled the start of an undulating 10 km course, sweeping down along the banks of the River Aln before climbing the pasture and startling the grazing sheep. Then the route meandered towards the canopy of the woodland trails before descending down a steep grass hill peppered with natural obstacles of mole hills and large tufts of grass before passing by the large gathering of vocal supporters at the Start/Finish section.

Mark Raine made a strong start leading the Harriers charge. I had him in my sights for about 700 metres before my focus shifted to a Saltwell Harrier running alongside me. We traded positions temporarily before he got bored and ran ahead. The challenges of the undulating course took a slight toll on me during the 2nd lap. A minor stitch began to emerge, not sure if this was due to the 2 Mars bars I consumed en-route to Alnwick! Mind over matter was the order of the day; there was job to be done and our status in Division 2 to maintain.

I tried to use the course to my running advantage, gazelle-like running on the downward trails; trying to regulate my breathing on the flat sections and having enough energy to push strongly on the uphill climbs. The roar of the crowd was continually a source of welcome encouragement and motivation also, especially when I could hear my name shouted out. My only concern was that my eager Labrador, Luna, would break free from the control of my partner Lisa and get a better PB than me or go for a swim in the river!

Further words of encouragement were offered by David Bentley, David Walker and Chris Lines as they glided past me as if mounted on Harry Potter’s firebolt brooms. In order to conserve my energy I think I offered each of them a breathless grunt!

The final run through the forest and decent towards the finish line focused my mind on those ahead of me and how I could overtake them while ensuring I didn’t twist my ankle on the undulating ground.

Into the home straight and I had a Saltwell Harrier within my sights but with a decent advantage on me. Game on! He weaved right and my opportunity to gain ground on him was cut off by other runners. I ran to the left, undercutting those ahead of me and having just enough energy to sprint to the finish line just ahead of the Saltwell Harrier and Ray Carmichael who was galloping closely in behind me.

The end of another Cross Country season and sadly despite all the fantastic efforts of the senior men’s team since last September, relegation to Division 3 was confirmed even before our team tent was taken down!

Onwards and hopefully upwards for next season. For any Harriers who have not yet experienced Cross Country running, I would encourage you to give it go, you will be pleasantly surprised by the camaraderie it generates. The locations are varied in their terrain and scenery with a wealth of running challenges presented, the support from spectators and marshals is fantastic and this season the weather has been surprisingly warm so hopefully normal wintry conditions will be prevail for 2019/2020.