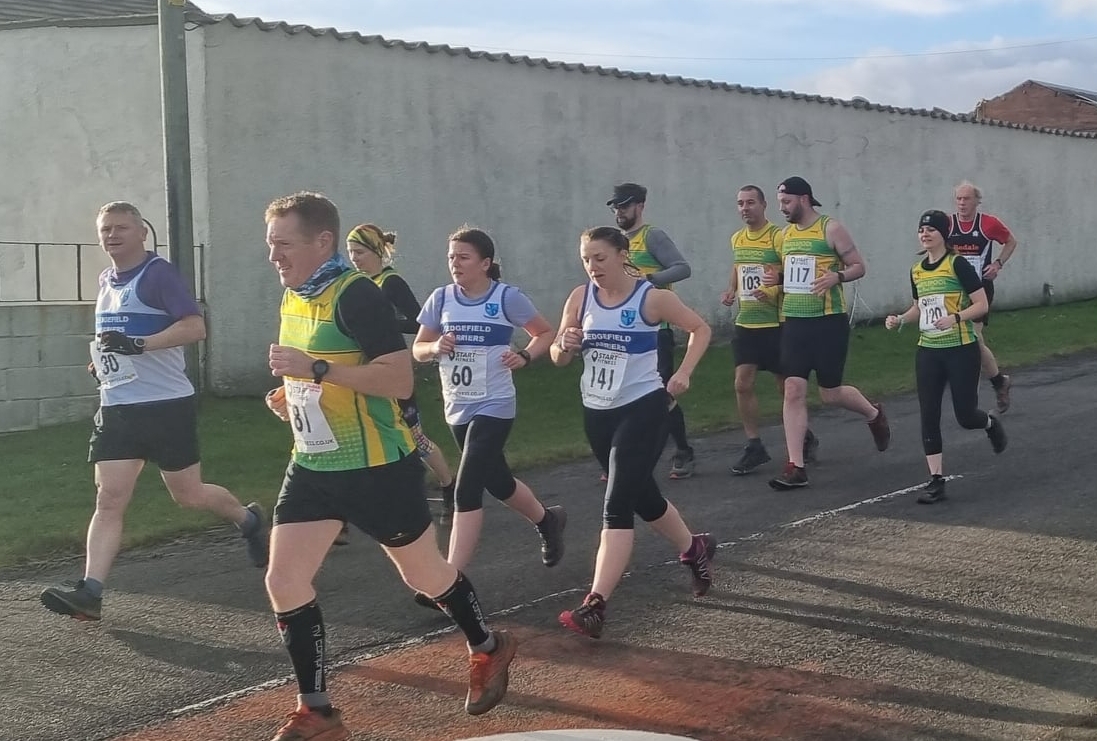 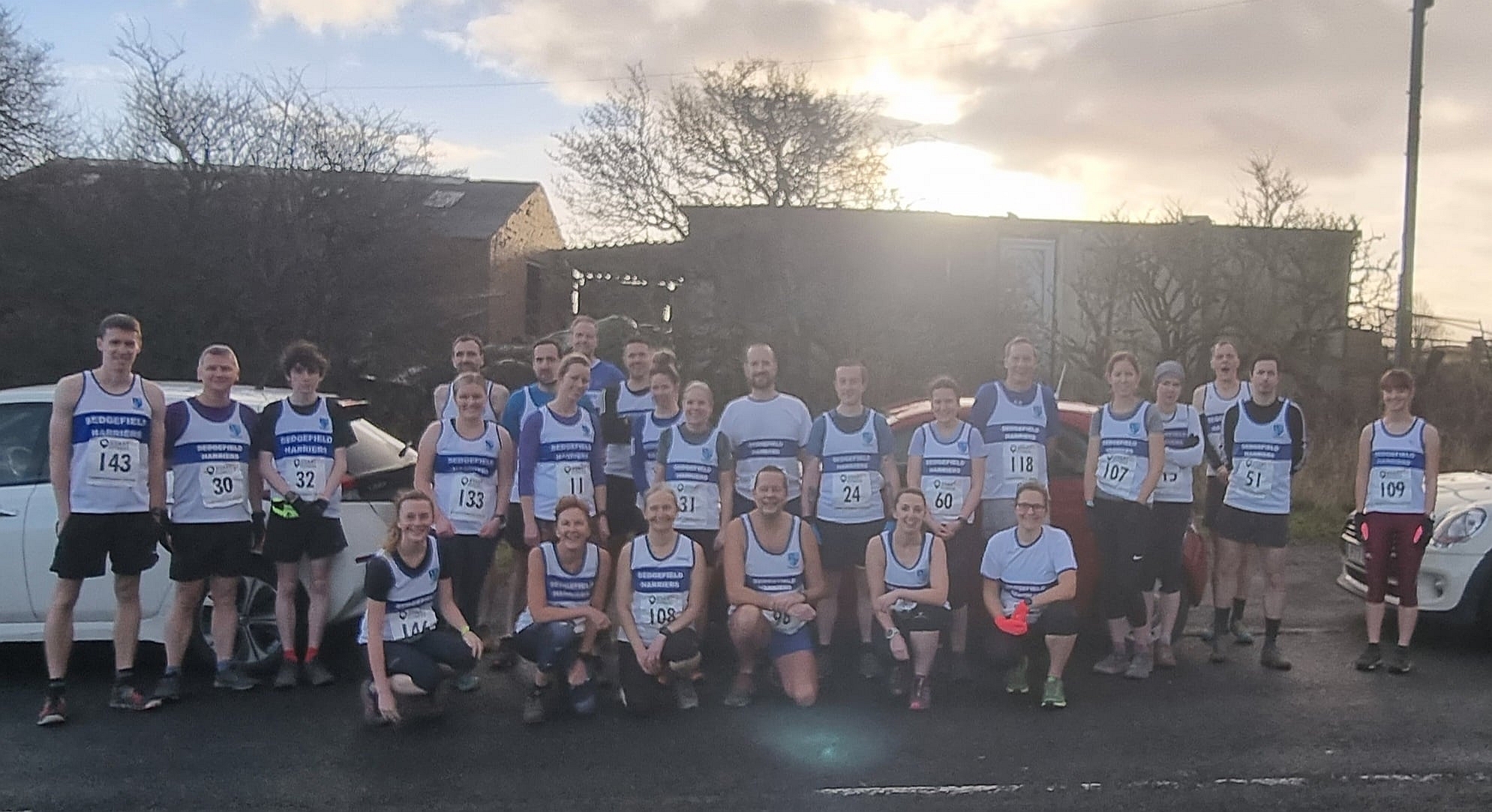 On Sunday 2nd January, I took part in the first Grand Prix event of 2022, the Old Monks Trail Race starting & finishing in Hart village. Although there was a significant turnout of Harriers it was freezing cold, so we didn’t gather for much of a pre-race chat although we were persuaded out of our vehicles for the pre-race photo before moving to the start line. And then we were off!

As I was recovering from having had covid over Christmas my race plan was to simply enjoy it and not get stuck in one of the denes! I set off with Beth and we decided to run it together but if either of us felt strong and wanted to go ahead that’s what we would do. Running down from the top of the hill, we headed into the first dene and as I am generally unstable on slippery downhills, I took it cautiously and Beth got ahead of me only for me to catch her on the uphill. This pattern continued for the majority of the race helped by the lovely marshals giving us loads of support and encouragement on route. We managed to catch up and then overtake Mike Wood, but Gary and Kathryn Forster were playing it tactically. Once Gary spotted us approaching from behind, they seemed to step it up a gear and we just couldn’t close the gap. We also played a game of cat and mouse with a lovely lady from Saltwell Harriers who gave us encouragement every time we went past, and we did the same to her.

The route is a mixture of uphill and downhill with road, trail, gravel, and mud! We even managed to catch a glimpse of the sea at the start and finish.

As we approached the last hill, Beth fell a few paces behind me so I waited for her at the top as I thought we had come this far so we would finish together. We ran into the last section together until Beth spotted the finish line and realised an extra grand prix point was up for grabs if she could get past me and so she did!! She found an extra gear, sped past & left for dust and I had no chance to respond, I was beaten.

Congratulations to all Harriers on their individual performances in this thoroughly enjoyable first race of the Grand Prix. I would highly recommend it to other members of the club as an ideal race to burn off those Christmas calories. 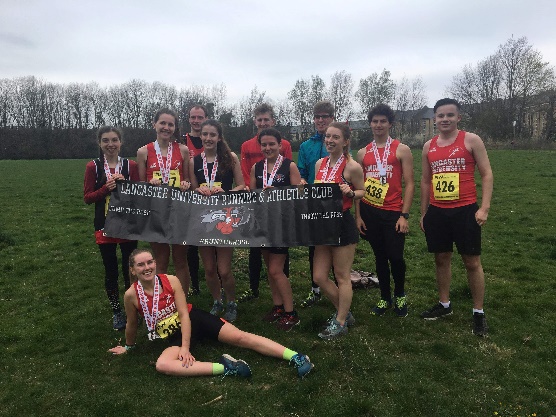 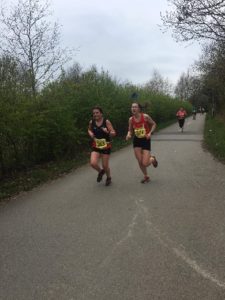 Mother’s Day 10k is part of the Lancaster Race Series and has been a firm favourite in Lancaster for many years. This race attracts many runners from Lancaster and Morecambe but also runners from as far afield as Surrey. Surprisingly, this race is totally flat which is a novelty for Lancaster as there are hills everywhere especially at parkrun.

Starting at the George & Dragon Pub, Lancaster Quay and heading towards Morecambe; this route is a simple out and back course on the cycle paths next to the River Lune. Due to the flat elevation, it is ideal for a fast time.

So, the start time was nearing, and I was getting my usual pre-race nerves, there was a short walk to the start (5 minutes) and then the race began. My first mile was very fast due to starting quite close to the front and this led to a new mile PB for me of 7:39. However, me being me, I decided that I could keep this pace going for the whole race!! As many of you know, I always set off a lot faster than I should. The run followed the cycle path and crossed the Lune Millennium Bridge which was lovely.

The halfway and turn around point was close, and my watch clocked 5k at 24:37 which was also a PB. However, after the halfway point, I started to flag! Luckily, one of my best friends (Alice) managed to catch me up and we both decided to stick with each other and help each other finish. As the race progressed, we both realised that sub 50 minutes for the 10k was achievable. Around 8km we decided we could do it. We went over the bridge for the final time and I knew it was going to be very close, but we could do it. 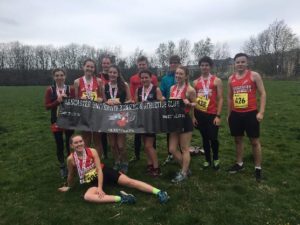 My final time was 49:56 which was a PB and I was very emotional on the line. Both Alice and I managed it which I didn’t think would be possible this early in the season. This is probably only one of the only times I have been emotional on a finish line. We were handed our medal, chocolate and water, then the celebrations began! 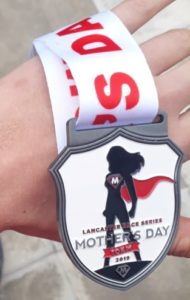 This was my first race in the Lancaster Race Series, and I would 100% recommend this particular race to anyone as it was well organised with a variety of prizes including a slow cooker and waffle maker (useful for students)!