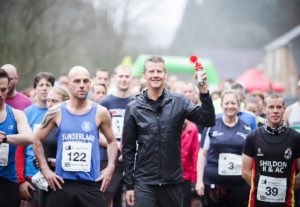 I entered this race earlier in the year not really knowing what to expect. I spent a lot of time there as a child so was well aware of the multi-terrain possibilities of the course. My fear after entering was that it was all going to be off road, uphill, through mud and over tree roots (some people’s cup of tea but I’ve done my share of Tough Mudders).

The weather forecast the night before was for drizzle and the met office wasn’t wrong. I arrived in good time for the start of the race so had a little walk from the parking area to the start line to see what was going on. It was all very subdued, a hand full of people milling around, the registration tent, the finish line and a solitary burger van, the only sound was that of a nearby stream and the van’s generator. I headed back to the car to keep warm, pin my number to my top and take on a few sips of water.

15 minutes to start and I ventured out of the car towards the start. Steve Cram had followed me up the road to the start line and offered a courteous “good morning.” There were a few more people there now and a bit more of an atmosphere was building. I had a little jog out of the back to the finish line to warm up then we were soon called to the start. Steve Cram started the race with a speech about the important work of Forestry England and the benefit of physical activity in these areas. He was supposed to be running but claimed he’d sustained a hamstring injury in training earlier in the week (I think he probably didn’t feel he was being paid enough to run back up the hill that we had to drive down to get to the start). 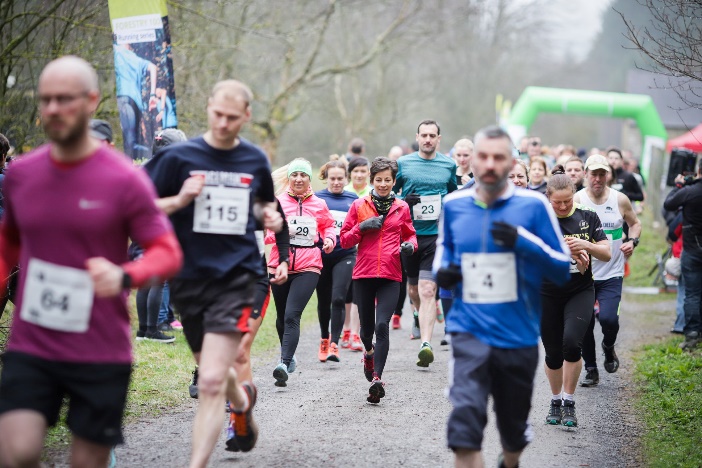 The race was under way, I made a very steady start as I knew from the run route signs on my way in that after the 200m flat to the first bend it was going to be a steep climb for at least a few hundred metres. Luckily for me the route was all forest track so solid under foot but there was no sight of the top of the hill as we passed the car entry road. A dozen or so runners, obviously more adept at running up hills, passed me on the way up. We reached the 1k marker and were still climbing. First mile passed in 9:07 mins of quad burning pain and 255 feet of ascent but soon after it levelled out a little, the damp mist and drizzle had subsided and the trees cleared to reveal a view of the forest below. It was a very scenic panorama of the valley below, the evergreen treetops and Weardale in the distance. 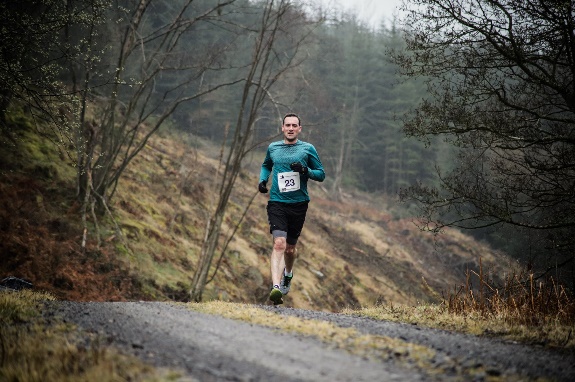 Another 194 feet of ascent through the 8:22 2nd mile and 176 feet up in the 8:44 3rd mile had my legs screaming for some downhill at the half way point. Soon after passing the 5k marker, which the drinks marshal had enthusiastically claimed “was just around the corner,” but was in fact around the corner, down a dip, up the other side of the dip and around another bend on the top of another rise, the descent began. My legs loosened up surprisingly quickly and the miles passed by quickly as the route meandered through the trees back down to the finish line. My legs were more adept at running downhill and flat than those who passed me going up as I steadily re-passed the dozen or so runners that passed me on the way up on the sprint to the finish, (7:16, 7:11 and 6:42 for miles 4, 5 and 6 respectively and a 1:20 ¼ mile sprint to the finish). I crossed the line in 48:56 which I was more that happy with especially considering the punishing nature of the first half of the race. Mr Cram was handing out the wooden finisher medals and the “well dones” at the finish and I helped myself to a cup of water and a Jaffa Cake from the refreshment table while I caught my 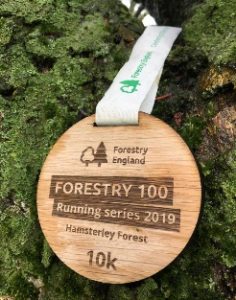 breath and watched a number of other runners finishing the course.

I thoroughly enjoyed this race, the sense of achievement in not giving in on the inclines, the interesting surroundings and tranquil, traffic free route made it different from the races I usually enter and I’d sign up to enter again next year (with a little more hill training under my belt).