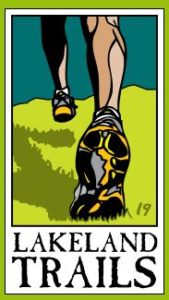 Great way to start our holiday in the Lakes.

Means we have to arrive early to start our holiday.

I love walking the hills in the Lake District.

To mark the last day in my forties!

There was a “challenge” option which is for the slower runners (or fast walkers), so no pressure!

Yes I do love walking the hills but I don’t like drops, I don’t like running down hill when it’s either steep, slippery, gravely or covered in stones/rocks.

Mile 8 was known as the coffin trail, steep uphill for a mile! 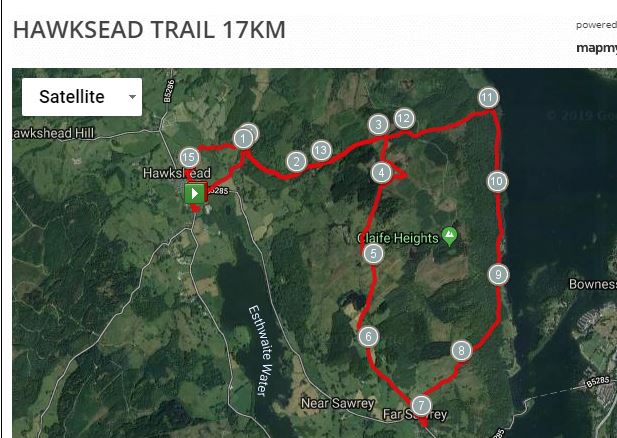 David was doing the “race” which meant he set off an hour after me, so my plan was to walk any bit I didn’t like and still arrive back before David. Matthew was to meet me at the end I told him it would take me about 2 hours (hopefully no longer)!

The race organisers said the weather was “perfect”, dry, just a bit breezy and cool, the 493 “challenge” runners lined up to start to the sound of drums and a brilliant atmosphere. We set off along the road and soon up the hill towards Chaife Heights, the pace was steady and I managed to run nearly all the way up, under foot was nice, no steep drops, not too much gravel or rocks, so the running was good. 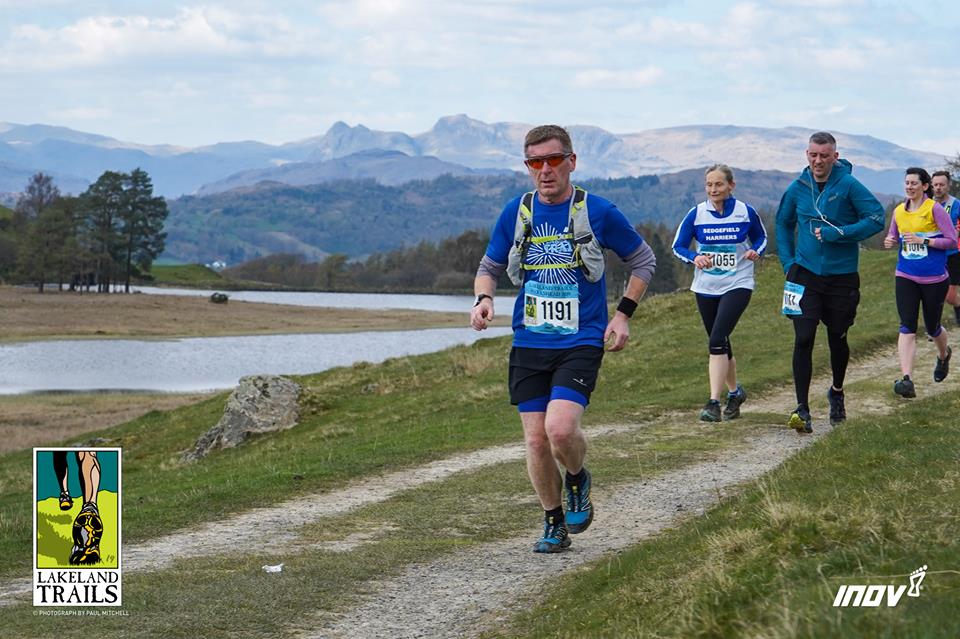 Following a down, an up and then a lovely grassy downhill we passed though Far Sawrey and the first water station, I was enjoying every step.

From Far Sawrey there was a long uphill, but with so many people walking, I felt the pressure was off and was happy to also walk. Whilst walking I still managed to overtake a lady who was running, just shows sometimes it does pay to be a tortoise.

For me the next bit was the worse bit of the race I really didn’t enjoy the drop down to Lake Windermere, it was quite steep with rocks and stones, I went so slow down about 30 people flew past me. Once on to the Lakeside I managed to pass a few of them before starting the coffin trail, no one ran that bit at all!  After the coffin trail mile it was 90% downhill to the finish.

I must say the marshals were great, one of them had about 10 small toy sheep with him and the one on the coffin trail was a full size skeleton he was wearing a hi-vis vest and pointing the right way.

With just over a mile before the finish I passed Matthew walking up the hill, I guessed that meant I was going faster than planned! I did walk part of the final downhill due to loose stones but once we were on the field and the road for the final stretch before the finish on Hawkhead playing fields I picked up the pace and passed quite a few runners and even managed a sprint finish with words of encouragement from a gentleman from St Helen’s Striders as I went past. 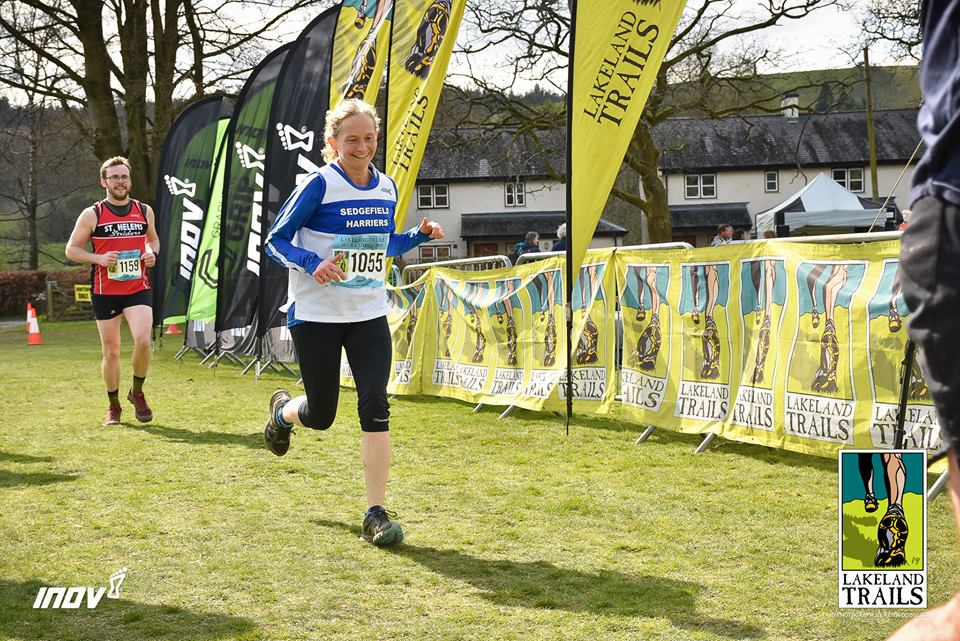 There was a commentator at the end of the race who spotted my number and shouted “well done Marie” as I came over the finish line.

To greet everyone at the end there were the drummers again, a finishers t-shirt and a brilliant selection of traders with goodies for sale, Matthew enjoyed a venison burger, David an apple and cinnamon latte and me a lovely cup of tea!

I really did enjoy the race (challenge) and would happily do it or maybe another Lakeland Trail run again, they are really not about time, they are about enjoying the hills, the views, the atmosphere and the great sense of achievement, which I did have at the end. 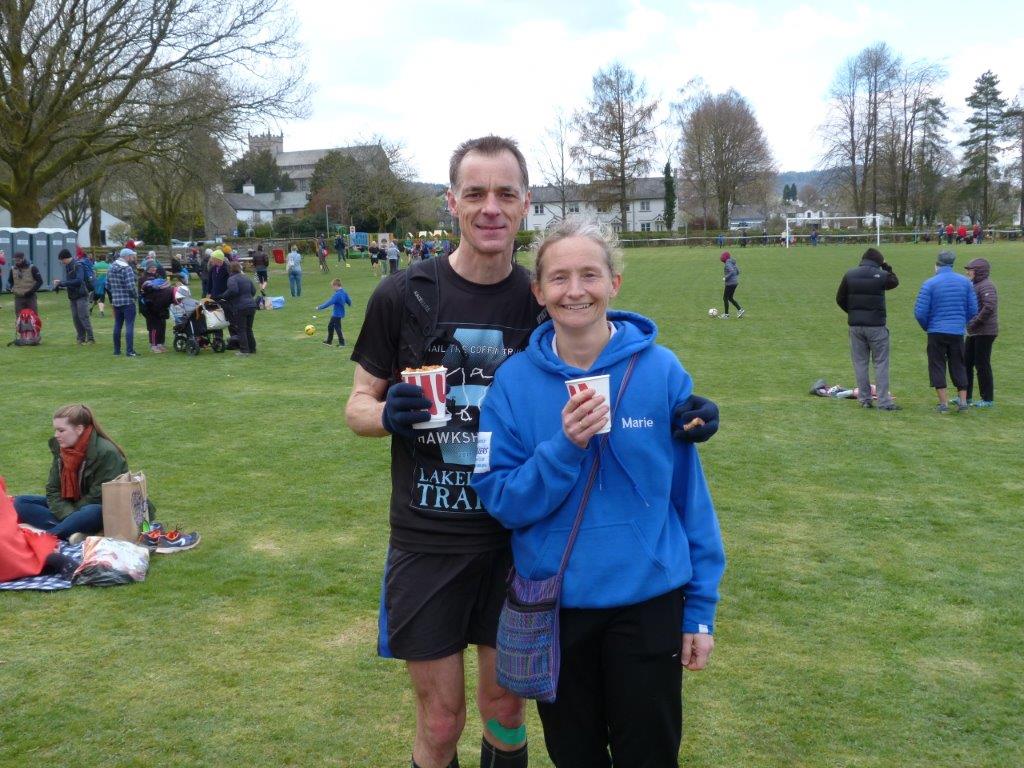