Lakeland Trails – Keswick, Saturday the 7th of September, starting and finishing in Fitzgerald Park. Weather was sunny, lovely blue skies, maybe just a bit too warm for running, but great for watching. 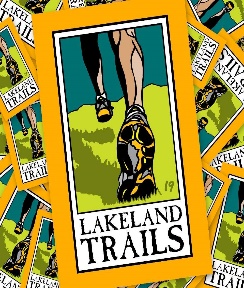 As I really enjoyed my first Lakeland Trail back in April I was keen to try another one and for an excuse for a weekend away!  Keswick was perfect as there is a little B&B we have been to a few times before just over the river from the park, so just a 2 minute walk to the start line. We also know a nice Italian restaurant which sells great pasta for the Friday night. 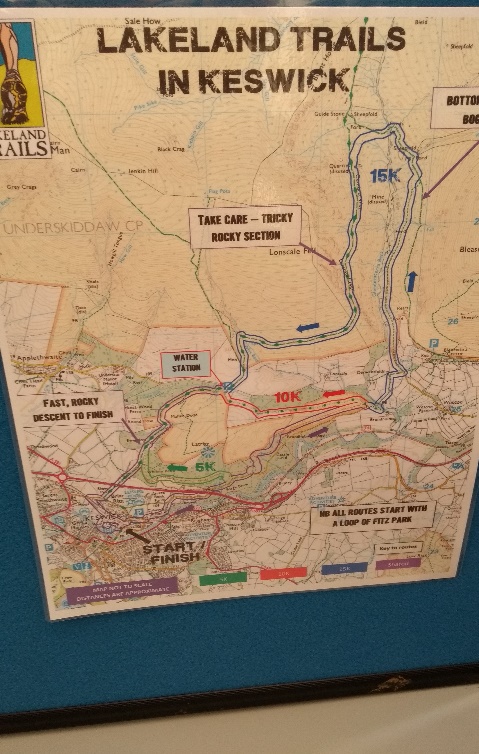 Keswick parkrun also uses Fitzgerald Park, which I was surprised to see hadn’t been cancelled as the first race set off at 11am and number collection started at 9am, but it worked perfectly, the parkrun used the trail finishing funnel and the portable loos, and the extra people knocking around added to the atmosphere, even boosted the numbers as some of the trail runners used the parkrun as their warm up (including David).

I opted for the 10k which set off at 11am to the sound of the Batala Lancaster Drummers. They really are good and created a brilliant atmosphere.  The race did a lap round the park before heading for the hills or I should say Latrigg.  For about 4 miles it was 85% up hill, on road, then path, then tracks, there was even a bit that reminded me of Stuart’s ploughed fields Sunday runs, but this was uphill! 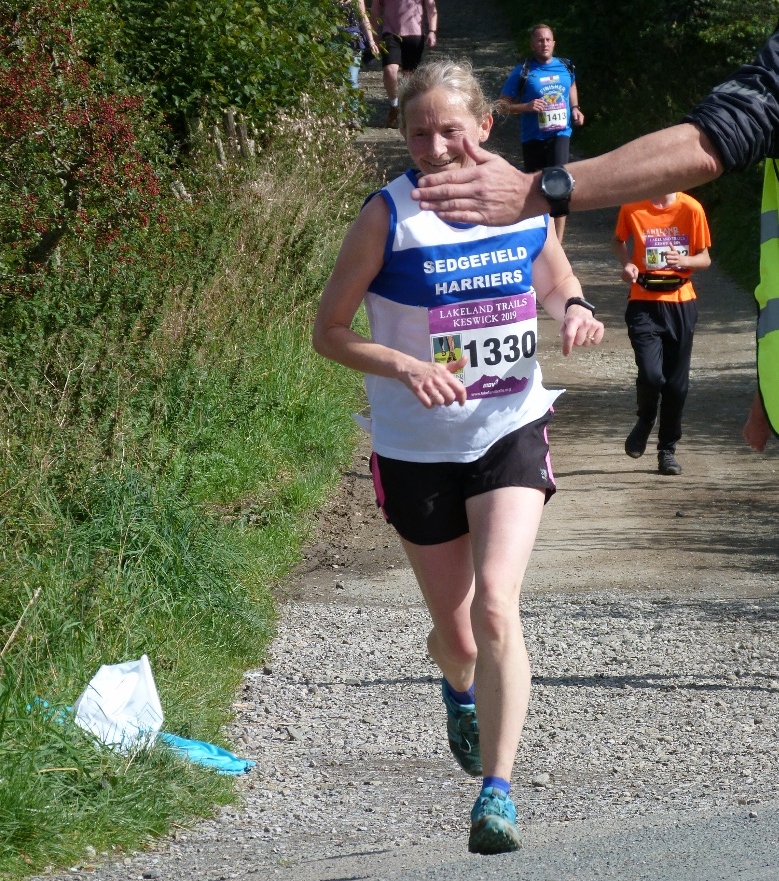 Then for about 2 miles it was 95% downhill. There was bit near the end of the hill which was a bit too steep to run, otherwise it was a lovely run down and quite fast if you dare just let your legs go. Then back to the park full of spectators, a cricket match and folks generally enjoying the sun.

For those who know Latrigg, the route headed up the east side round the back past the main path heading up to Skiddaw then back down the main route to the west of Latrigg. 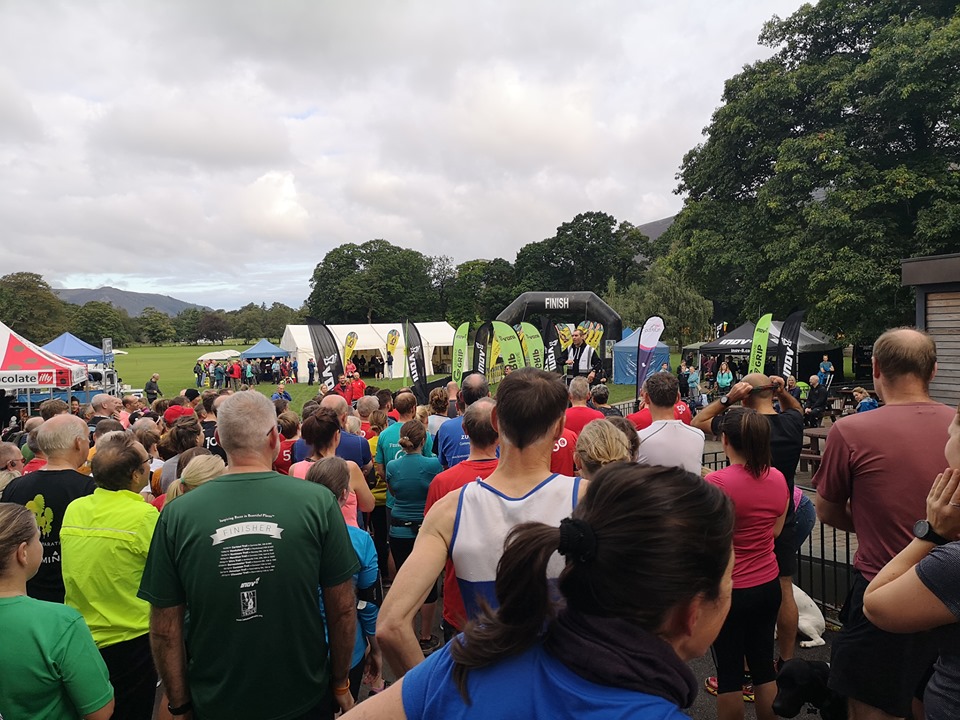 There is a great café in the park next to the start/finish and all the stalls that were at the last Lakeland Trails were also there selling coffee, burgers, wraps, ice cream and running shoes, clothing etc.  The drummers were playing on and off all day and to kick off all the other races, which was brilliant to watch once I got back from my shower and while eating my dinner in the café. 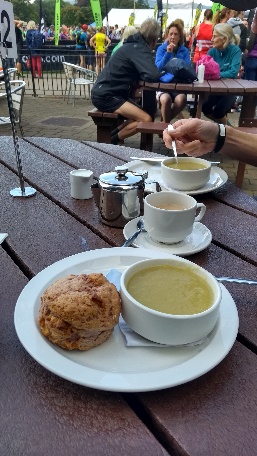 At 2pm it was David’s turn, see below.

Would I recommend it? “Oh yes” these really are not about time they are about running somewhere special with fantastic views and a wonderful atmosphere.  The B&B just 2 minutes away was ideal just to pop back for a shower then back to the park again to watch the other races. I even managed a walk along the southern side of Latrigg while David was running. 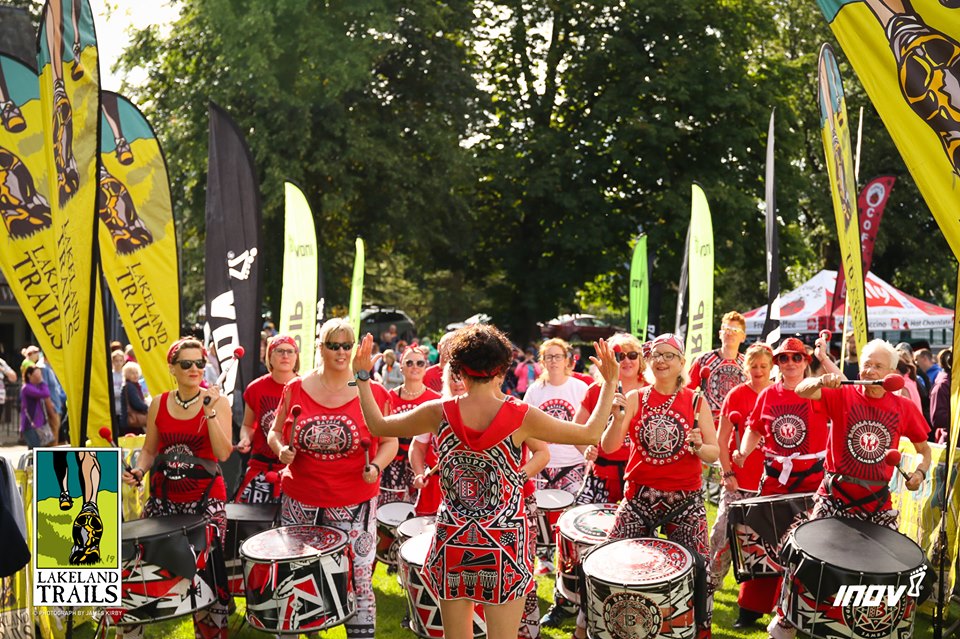 Then to top it all off I won a spot prize……. free entry to the Dirty Double, which is Ullswater Trail Race Saturday the 26th of October then Helvellyn Trail Race on Sunday the 27th, pity I’m away, but David just might use it. J

Well the 15km for me was pretty much a race of two halves: 50 minutes up, over 556m of climb, then down the other side for 28 minutes

The 15km starts with the 10k, a steady climb out of Keswick then when you get into the woods there are a few lung busting short climbs until the route flattens out as it makes its way around Latrigg. 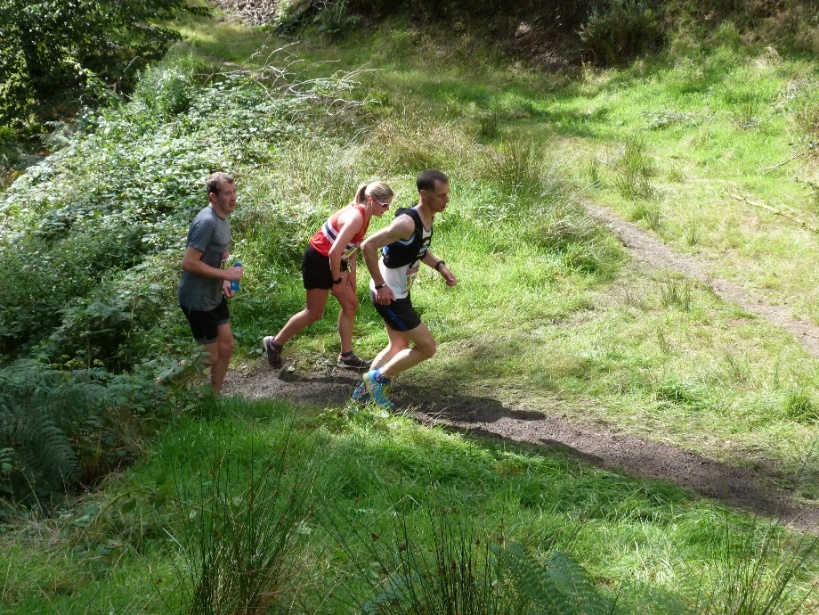 There is not much passing going on in this section due to the climbs and single track but as the route opens up you get some great views as you get to the point where the 10k turns back behind Latrigg.

The 15k drops down a short section of road before crossing a stream and starting the long drag up the side of the valley.

Passing through the aptly named bottomless bog section (long legs are a definite advantage at this point) this section again offered not much opportunity to overtake but the plan was to save the legs for the downhill section to come so I just ran a steady pace in line and took in more of the great views. 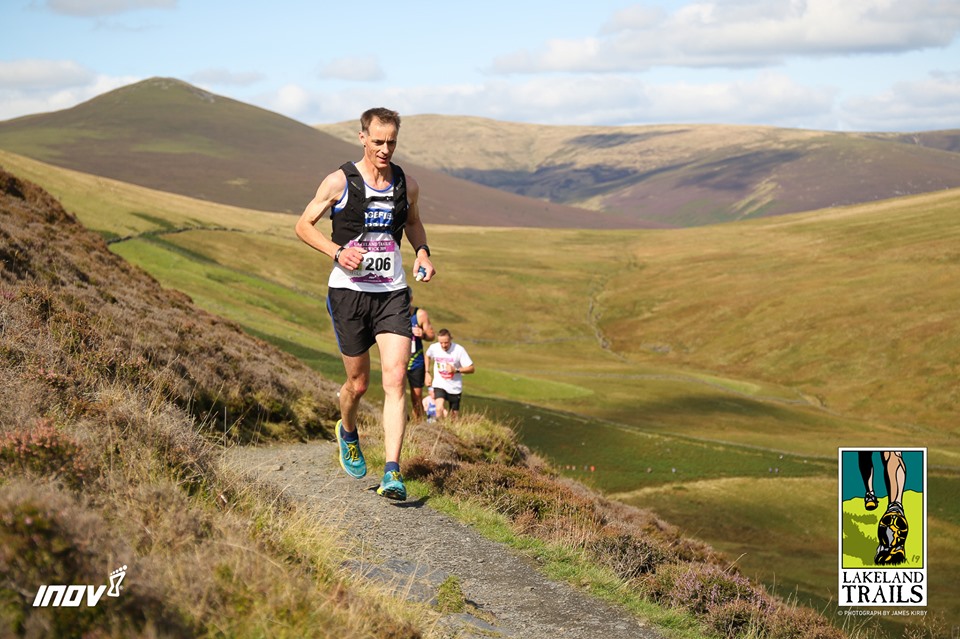 We just kept climbing up to the head of the valley, over the bridge and then the last climb up to the top path (photo above) it was quite a view looking back down the valley at the other runners and where we had come up from.

I knew the profile of the route as we ran the top section but what a run down hill!  You basically ran as fast as you could downhill for 6km (there is a short uphill section about half way down that has your calves in shock, but once you’re over it, it’s back to flat out running again).

The route gets faster and faster until by the time you are heading for the road you’re having to slow yourself down before you lose total control of your arms and legs.

The last section of route flattens out and takes you up a short steep climb onto the old railway then back into Fitzgerald Park and round to the finish.

I was pleased with the run and my position on the day, number 82 and I swapped positons all the way from the top so it was good to keep in front of another guy at the finish, but the legs had taken a bit of a beating! I got talking to him at the finish; he had come all the way from the Bridlington area, he had done the race a few time before but just kept coming back for the downhill, “no hills like this at home” was his reason! 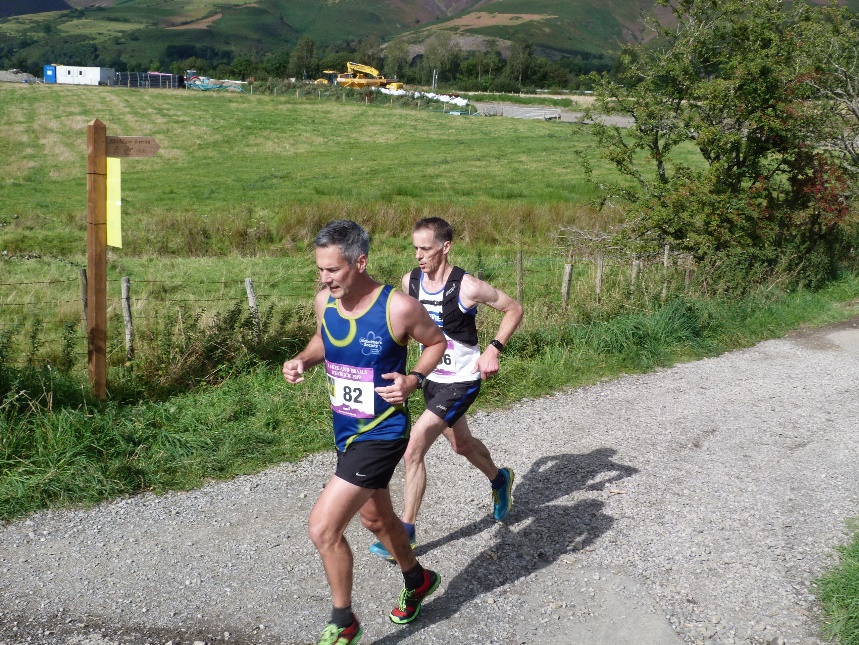 It is another great race in the Lakeland series. If you like a bit of mud/grass under foot and don’t mind the hills, get a run booked in. 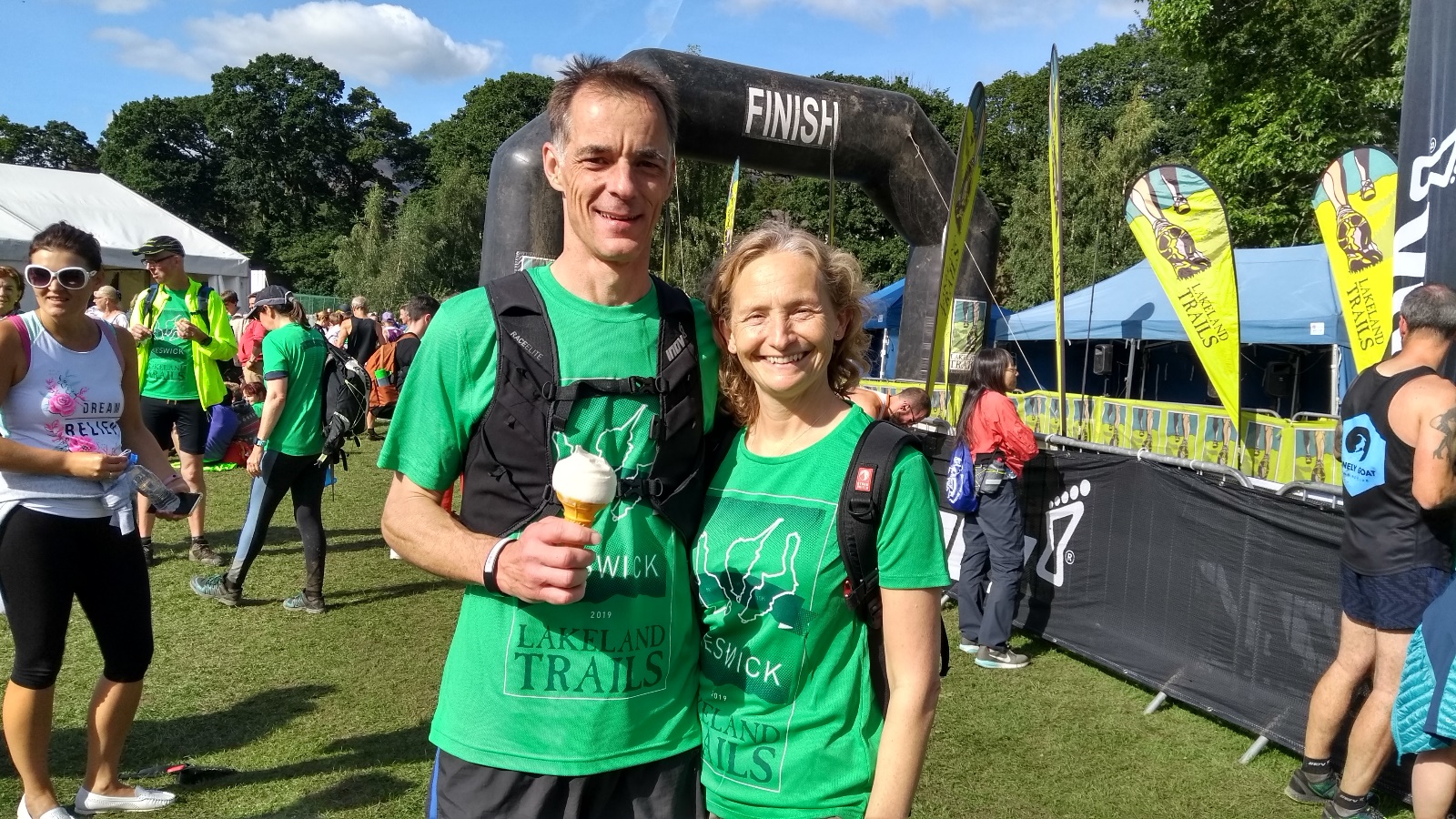