By Beth Raine and Paula Warwick

If someone had said two years ago (before I joined the Harriers) that I would run a marathon, I would have laughed and said no way! Fast forward those two years and I’m stood in the pen with the thousands of other runners, waiting to set off for a journey into the unknown. Having been inspired by the efforts of fellow Harriers at Manchester three weeks before, it was now my turn to see what I could do.

Sure, I’d done the training runs with some amazing support of fellow Harriers (Tracy F, Ali, Alda, Sue D, Georgina and Paula) but could I go the distance and run 26.2 miles? I was about to find out. 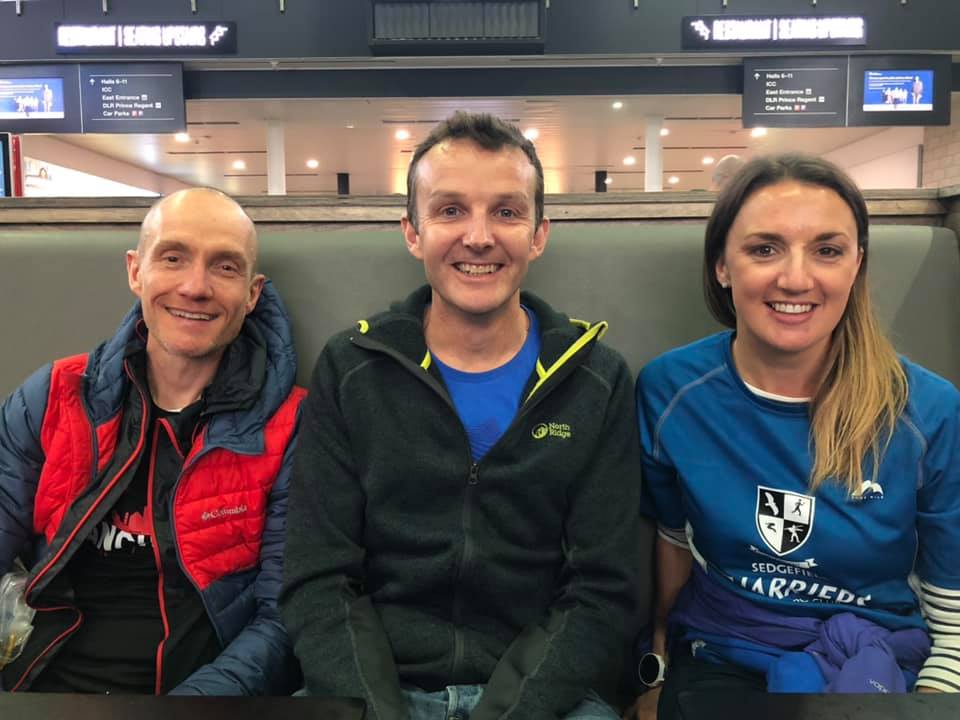 With the plan to meet Paula at the mile 4 marker (we were starting in different zones), I was happy that we would run together and although at a pace considerably slower than Paula is capable of, it was going to be a good day out.

8th October 2018, the post lady had delivered another magazine, presumably for Dave (CIBSE or Investors Chronicle!!!), I picked it off the door mat to see “in!”, I quickly looked at the name and realised it was for me, then it dawned on me, oh no, I started to shake and felt sick, this had happened once before. I opened the plastic wrapping just to clarify it was from London Marathon before I carefully thought how I’d break the news to Dave!

So, my training started with Rosie in RED January, then got progressively worse when I went back to work in March only running once a week and usually with a buggy. I managed to squeeze a couple of long runs in with Jane and Tracy Glaister as they trained for Manchester and I finished doing a 20 miler with Beth.

Thursday 25th April: we left Sedgefield for Essex, Dave had a stomach bug and Amy was full of cold, I wasn’t happy that I had to share a car with them both for fear of catching something, let alone the same hotel room…..and bed! 😤

Marathon Day, Sunday 28th April, 26.2 miles awaited me. From getting up that morning I couldn’t wait to get back into bed! Full of cold, twisty baby, sick husband, watch battery dead, ran out the house late (as ever these days) and missed the train! Eventually meeting Beth and Mark in Greenwich a few minutes before the pen closed. I thought I’d chance it and try get into the red pen with Beth so we could start together, the Marshal insisted on looking at my number, I gave him a quick look but he clocked it….I was a blue, I tried to act stupid but they made me leave, with very little time to get to the blue pen. Thankfully Beth and I had a plan, we’d both start at 10.48am, I’d run a minute a mile quicker ‘til mile 4 then stop under the balloon arch where she’d find me! Unfortunately I was too late in my pen, I started at 10.59am with the 7 hour pacer 😫.

Well I arrived at mile 4 with no sign of Paula! I hovered for a minute, jogging on the spot, looking back down the field to see if I could catch a glimpse but to no avail. I decided to go on, but about 20 seconds later decided I hadn’t waited long enough so I jogged back! Still no sign, so I decided to carry on. Assuming she was behind me, I knew she’d catch me up at some point.

The course was absolutely amazing! I knew how privileged I was to be taking part in this iconic event. Having listened in awe to the experiences of others, I was eager to see if it lived up to the hype and boy did it! There were crowds along the entire route and I mean crowds ten deep in places, with rallying cries of “you’ve got this” and “you’re amazing”! The noise was phenomenal. 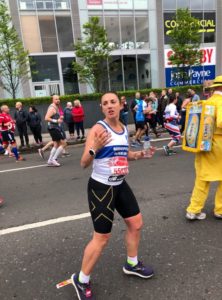 Having seen Mark and Dave at mile 7 just after Cutty Sark and keen to find out where Paula was, with the news that she wasn’t far behind, I carried on.

The course was pretty darn flat and as I crossed onto Tower Bridge, I got real goosebumps as the imposing landmark came into view. I was really enjoying the atmosphere and I was feeling strong.

The miles were ticking over (my Garmin was beeping about half a mile earlier than the mile markers due to the weaving and the little trip back to see if I could spot Paula) and I was happy with my pacing. I was even happier when I got a hug from behind at mile 16 and it was Paula. We’d found each other!

I ran as quick as I could, constantly dodging the walkers and fun runners in crazy costumes. I passed two rhinos, the 6.30 pacer, a man in a bomb disposal suit, the 6 hour pacer, a bloke running in ski boots, the 5.45 pacer, Jesus, another rhino and the 5.30 pacer. 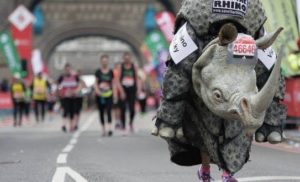 I got to mile 4, I stood and waited with a lot of other runners who had the same plan. I was in two minds whether I should stop because I started so late but I said I would, so I did. After 10 minutes I felt I’d waited long enough and sure enough the 7 hour pacer was heading towards me. I ran on knowing Dave and Mark would be at Cutty Sark, mile 7. I spotted them and Dave shouted Beth was 8 minutes a head, I swore (a few times). I worked out that if I ran a minute a mile quicker than Beth and giving time for dodging the Rhinos, I would catch her about mile 16. I also thought it would give those at home tracking us some excitement. The chase began! Mile 15, I was bored, no one to talk to, no one to whinge at, no one to throw a paddy with (I missed Jane and Ray) then I spotted a white vest with blue band…I got closer. Before I put my arms around this woman I needed to make sure it was Beth…it was, I was so pleased.

Canary Wharf loomed into view and we were having a great time!

Having tried to channel my inner Tracy G (whose metronomic pacing at Manchester was inspirational to watch), at mile 21 things started to unravel a little and my pace dropped off. I didn’t hit “the wall” just a wave of fatigue and a stitch that wouldn’t go away. The last 5 miles were tough and the sight of Big Ben was a huge relief! I wasn’t great company for Paula at this stage who seemed to know I wouldn’t be up for playing the alphabet game right then! But just being by my side, was a huge support. 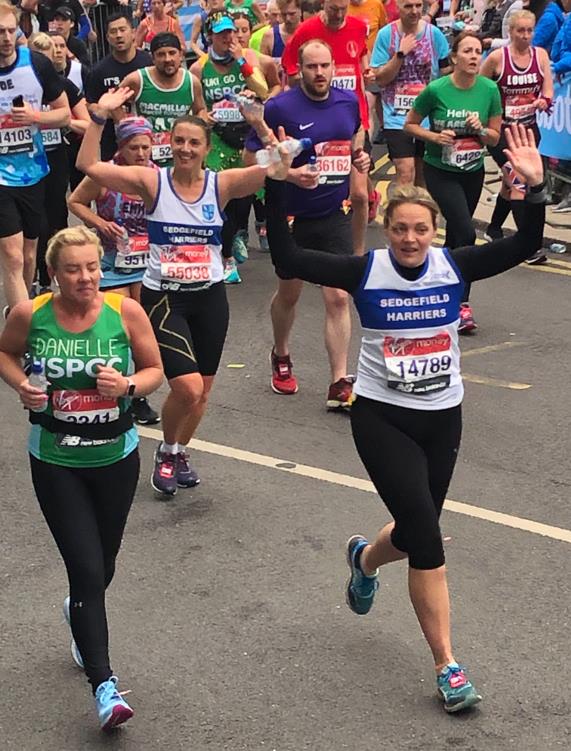 Turning into Parliament Square and across to Birdcage Walk all seemed unreal. I’d watched this event on the television in the past and wondered what it must be like to be there, and here I was about to turn onto the Mall. Just in that moment I heard a massive scream of “BETH” in the crowds and saw Aileen with yards to go. Buckingham Palace to my left, The Queen Victoria Memorial in front and then a right hand turn down The Mall. Then with a final push (not quite a sprint finish), we were over the line!

From there on we had a great race! No idea what time I finished, didn’t really care! Pleased to get the medal, Dave and Mark robbed the contents of my goody bag, Beth completed her first Marathon.

I did it in 4:53:59. As I stopped my Garmin, 2 new announcements…my record marathon time and my longest run of 26.96 miles! All that weaving and turning back had racked up some extra mileage! Knowing we’d raised over £1500 (including Gift Aid) for FoSH made the extra distance seem all worthwhile! 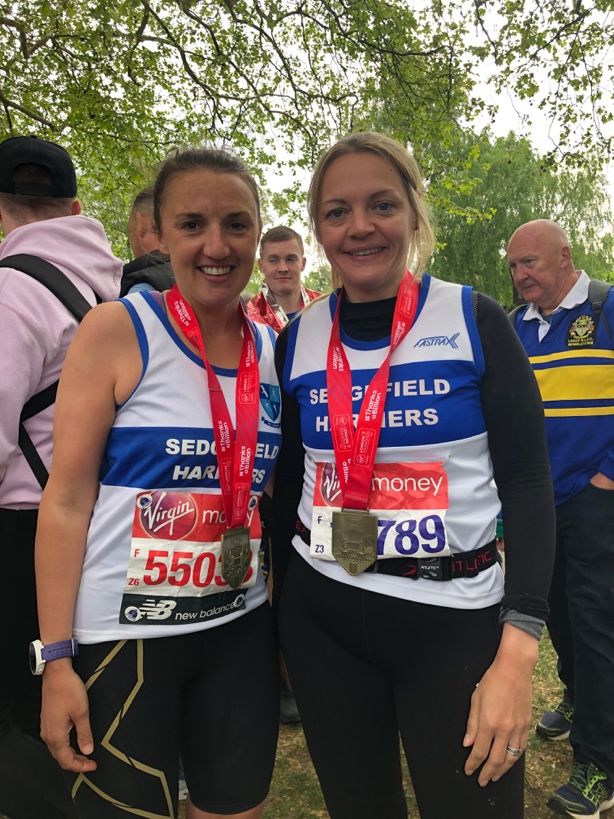 What do I think about this race?

I know entry is ballot only and I know how hard it is to get in, but if you do and you get to run this event, you will have the most amazing experience! The organisation is second to none, the crowds were fantastic and the backdrop of London’s landmarks was the cherry on the top!

Whenever I speak to people about running I am at pains to point out that Mark is “the runner” in our house and that I am just “having a go”. The day after the marathon as I reflect on my performance; whilst I am not quite up to Mr Raine’s speed, I think I might have to start accepting that it is okay to call myself a runner now!

When I got back to Essex, Amy greeted me with a snotty kiss, she wore her tee shirt with pride, I demolished a Chinese and thoroughly enjoyed climbing into bed!