A few of the Tuesday night Harriers were talking about this race at training and I think it was Mark that asked if I’d entered. I hadn’t heard about it until then but signed up as soon as I got home. It was very reasonably priced, a nice short distance, local and you got your supper at the end. 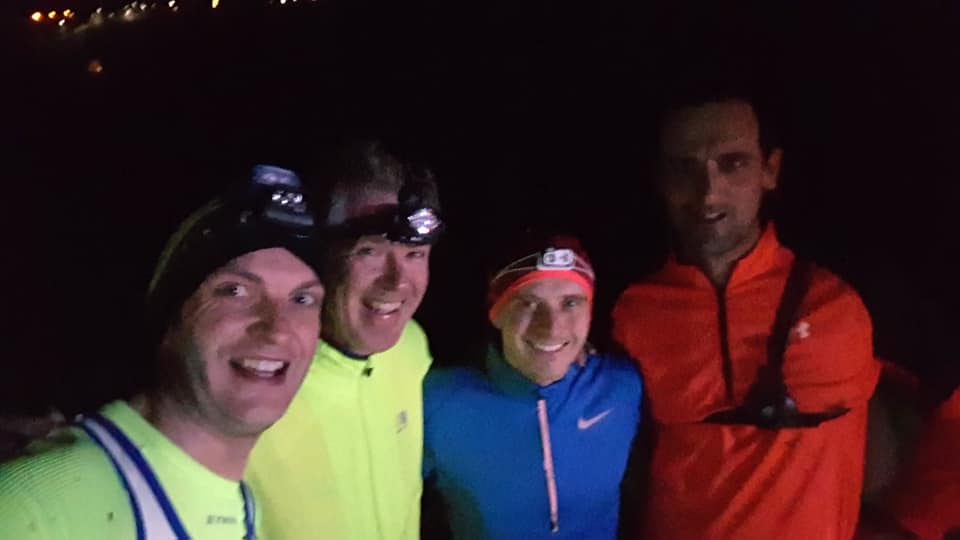 Mark was the 1st Harrier I saw as I approached the entrance to Trimdon Grange Community Centre closely followed by Pete loitering outside the gents. Registration was super quick and straight forward and as I returned to Mark and Pete, the headmaster’s infamous finger wagged in my direction and decreed that I’d be doing the race rundown homework for this one. You can’t say no to sir, can you?

The start line was a 10-minute walk from registration, and I’m pleased I was with Andrew following Rosie and Fay to the start line as, even with directions, I wouldn’t have had a clue where to go. It’s been a very wet and stormy winter so as soon as we left the path onto the field the ground became very soft. Thankfully the rain held off for the night and there was a clear, moonlit sky. It was however very windy on top of the hill and bitterly cold. Everybody appeared to be huddled together like a waddle of penguins, maybe subconsciously shielding each other from the elements. I hadn’t taken part in the recce run but had been told that it was muddy in places and this was reiterated it the pre run brief.

I was close to the front at the off and I think that worked as an advantage. We careered down the sodden grassy field and through gate onto the road before a pinch point onto the trail. I guess further down the field, the tight entrance could have slowed a few runners down. It was soon after here that I remembered to start my watch. The ground wasn’t too bad here, firm with a few avoidable puddles. Three or four came past me and I passed a few too. As we left this path and turned to the right to climb a dozen or so steps I was right behind Rosie and as the trail turned left and began to climb up a hill I passed her and another guy. At the top of the climb I passed one other runner and from that point on it was a solitary run. Other than the helpful marshals and the odd glimpse of a head torch in the distance I was alone. The trail became much more slippery as we entered the first section of woods. It twisted and turned through the trees and my stride shortened considerably as the soles of my trail shoes struggled for grip. My senses were on high alert and I was placing my feet carefully as I could, only being able to see the square meter in front of me lit by my torch. At the same time trying not to slide over, crash into the undergrowth and follow the painted arrows. I made it out of the first section of woods, crossed the road to the start of the second section and the ground became even more claggy. My toe struck what felt like a tree stump and I stumbled down onto one knee and slid a little but managed to get straight back up and carry on. I’m sure I won’t have been the only one to take a tumble.

I also almost took a tumble where the route ran alongside a ditch. The ditch was on the left then there was a crossover point which put the ditch on the right somehow. This crossing disorientated me and I almost toppled in. The course made its way back down to the start finish field, weaving through more trees and more mud and I sensed that somebody was closing in on me. As I passed the last marshal entering the field, I hadn’t heard their instruction and carried on straight into the darkness before hearing their shout to go right. This allowed the guy behind me to close the gap further but I had enough left in my legs to hold him off over the finish line. Mil, Declan, Ray and David Bentley were already finished, David clutching his prize for 2nd place and Rosie was very close behind me with her 3rd woman prize so it was a great night of performances from the Harriers.

Back at the community centre the pie and peas were being served up. Again, being at the front was an advantage as there was an ever-growing queue for the delicious, warming and welcome supper. All those waiting in line looked happy and despite the treacherous conditions seemed to have really enjoyed the different challenge a head torch lit night trail race offered. A tough but thoroughly enjoyable, inclusive and sociable event.