Thirty six miles along the beautiful Northumberland coastal paths, almost deserted beaches and through picturesque fishing villages, past ancient castles, and less ancient golf courses – What’s not to like about the EnduranceLife Northumberland Coastal Ultra?

Well the zero four hundred hours alarm call was the first thing I wasn’t overly enamoured with, and the sound of rain bouncing off the bedroom window was the second. But an easy drive on empty roads, cheap well marshalled parking and fairly slick sign on process improved matters. It had even stopped raining, although the wind most definitely remained.

Parking was on the links in sight of Bamburgh castle where the race HQ tent and toilet facilities were located. The castle was quite a sight as dawn broke slowly revealing the majesty of the structure and its location. Then, suitably briefed it was time to get on the buses that would take us to the start in Alnwick.

Chatter on the bus was an indication that I was perhaps a little out of my depth. From the ex-Marine, seated behind me swapping tales of ultras, ironmen and multiday stage races with his bus buddy, to the lady next to me regaling me with memories of the Wales 3000 (https://www.welsh3000s.co.uk) and her future plans for the Bob Graham Round.

The course would take us from Alnwick, out to Alnmouth then up the coast to Bamburgh. In the shadow of the castle the ultra course would split from the marathon course and head off on a loop north and around inland before rejoining the beach south of Bamburgh and retracing its earlier steps to the split point, this time turning south for the run into the finish. 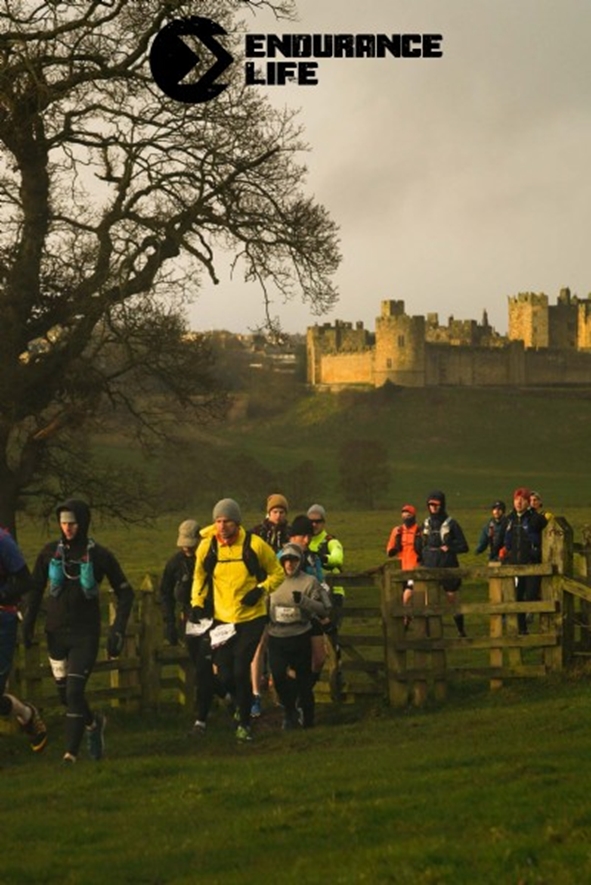 We were kicked off the buses in view of Alnwick Castle, and not far from the Harrier League XC field. With three bus loads of runners, no toilets and not even many trees in the start field if you’re shy about bodily functions this may not be the race start for you. Preparations completed we all gathered between the two flags indicating the start line and in a (fortunately) brief rain squall we were off.

The first part of the course roughly follows the course of the river Aln down to Alnmouth over wet but none too technical terrain and the pack quickly spread out. Despite the strong wind and weak sunshine I was soon getting a bit warm, so juggling my backpack and jacket I tried, eventually successfully, to remove my arm warmers without having to stop. Just shy of six kilometres in came the first real obstacle, stepping stones across the river. Not enough water in the river to require a diversion but just enough to cover the stones by an inch or two ensuring wet feet – not ideal with fifty kilometres to go.

The kilometres out to Alnmouth were fairly uneventful and as we reached the mouth of the river and turned north to head up the coast, joy of joys a tail wind. The first feed station came and went with a tinge of disappointment. I know the organisers had stressed that the feed stations were only there to complement your own nutrition plans but a big bag of jelly sweets, a bowl of crisps and some bits of banana were not exactly an overwhelming selection of goodies. The feed stations were also acting as check points with each runner electronically recorded by the dibber attached to their wrist. Then a climb up along the edge of a golf course followed by a steep drop down onto the beach, where an unplanned diversion into the undergrowth whilst descending cost me a few cuts to my right knee. 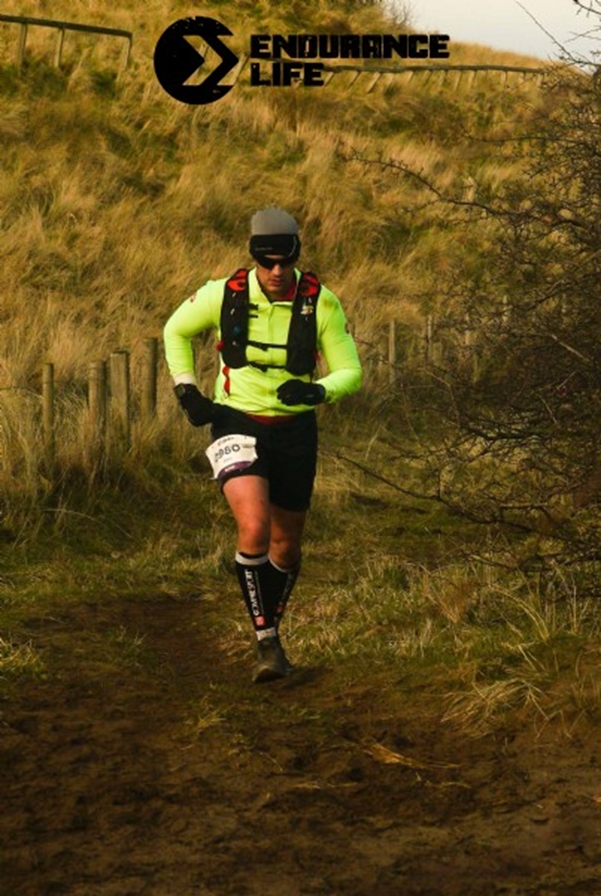 I was still feeling okay at twenty one kilometres, albeit very conscious that there was still more than a full marathon to go. But half a kilometre later it started to go wrong. Rounding a turn onto an off-camber section of the path complete with strong cross wind, my feet went from under me and down I went. More surprised than hurt I got up, took a couple of paces, began to check I was okay and bang, down I went again. Two falls in the space of as many strides knocked the wind out of me a bit but thankfully it was mainly my pride that was dented.

By half way I was beginning to struggle. The wind was a huge factor. At times a tail wind, mostly a cross wind but in some sections a full on head wind and it was brutal. The conditions and the terrain, which was more awkward than out and out technical, were taking their toll. My legs were starting to hurt and my head was beginning to doubt. By the time I hit Beadnell Beach at about thirty four kilometres I was figuratively on my knees. I was walking more and more, beginning to cramp a bit and generally not really enjoying myself. 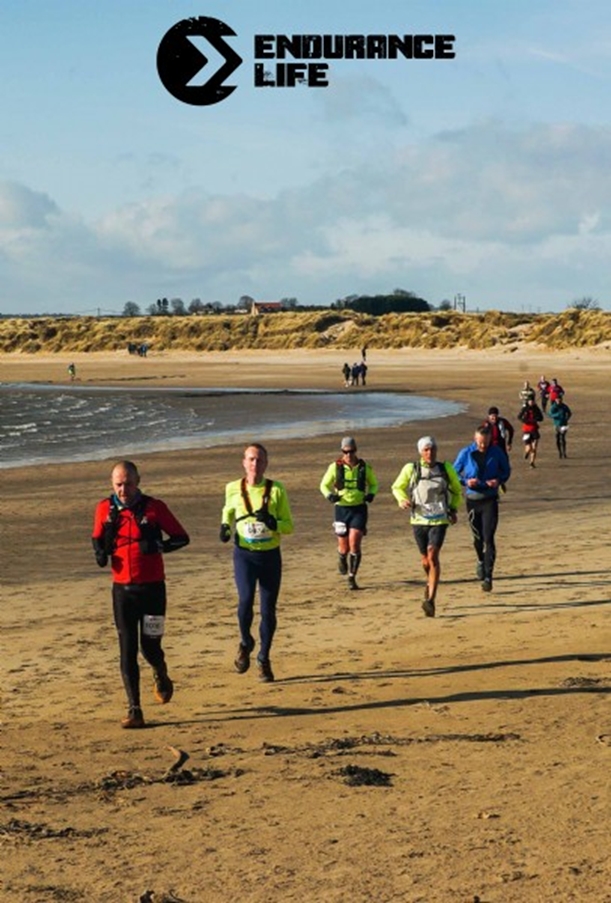 My mood was not helped by the fact that I had just managed to make it past the 10k start on the beach when the runners were released from there. So from then on in there was a fairly constant stream of people breezing past me, either motoring along at indecent pace or gently cruising past chatting away and making running look a lot easier than it felt to me.

Forty kilometres after I had started I hit the beach at Bamburgh, and the weather hit me, hard. Despite still heading in broadly the same direction as we had all day, the wind was full on in your face and blowing a hooly, the sand was scouring my legs and one of the few rain showers blew in. I was tired, cold and thoroughly disillusioned with long distance running. At that point, given my legs were really struggling and with the prospect of the weather closing in I made the decision that to head out on the extra ultra loop would be folly and that I would simply head for the finish at the split point. 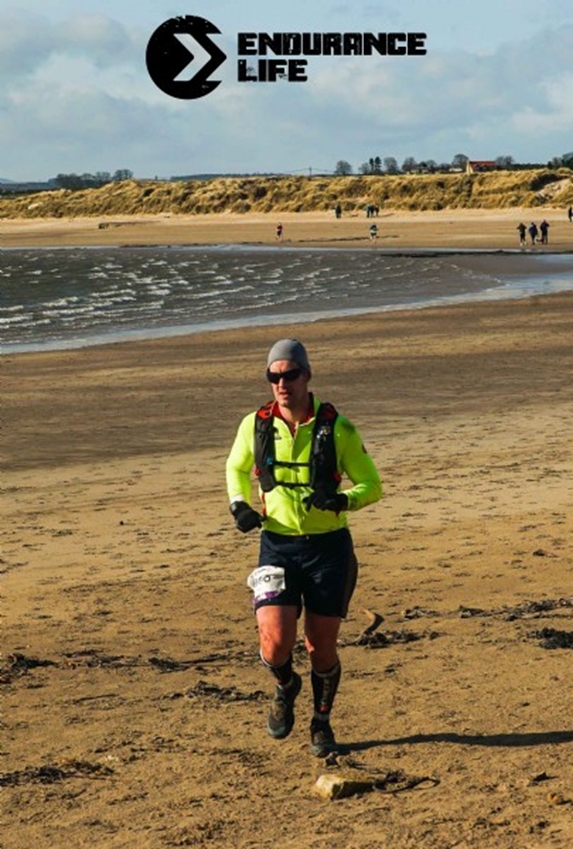 That was still easier said than done. I still had about four kilometres to go to the split point and I covered them painfully slowly. It was one of those horrible scenarios, you can see where you are heading to but it just refuses to get any closer, until finally it did. Off the beach and up into the dunes, a small moment of indecision at the split point, I headed south for the finish and promptly had my decision vindicated by another bout of cramp that brought me to a halt, again.

Even the last kilometre or so from the split point to the finish took me an age and I was passed by several more runners until I finally crossed the line and my misery was almost ended.

Now, having done eight miles less than the intended course, but still a personal record of twenty eight miles, I arrived at the finish quickly enough for them to try to award me third place in the Ultra, but I duly declined and joined the queue to have my dibber cut off and get my race time print out. Getting a print out was to me an unnecessary delay, slowing down the queue of athletes as it did and forcing us to remain exposed to the wind for much longer than I found comfortable. By the time I got through to the mandatory kit check I was shivering and unable to even hold the pen to initial the check sheet. But that was the last of the formalities. I found my jacket that had been brought back from the start and went and sat in my car to warm up with tea and heated seats.

Although the run did not go as planned it probably went as I expected. I didn’t have enough training in my legs or desire in my heart to complete the full ultra, and I take my hat off to anybody who has, and I bow in admiration to anybody who thought a second one was a good idea, but by way of two falls and a submission this one beat me.

There is quite a lot to like about the Northumberland Coastal Ultra, (the trails, the scenery, the organisation but not the wind) if running long distances is your idea of fun but for me it was quite simply ten thousand steps too far.