This race started for me back at the Tees Barrage trail race in Stockton when I got talking to another club runner about sub 40 minute 10ks and fast 10k courses. We were running around the same time on the 5ks and he said he had managed to get under at Dishforth last year (just!) and I should give it a go.

Chasing people around the x-country races for the last few months has helped with the endurance but I needed more speed so I printed off a 10k training guide to put a bit of science behind my training.

My 7 weeks training went sort of to plan with the odd race and X/C thrown in but John was suffering with various injuries that really knocked his training. In the weeks running up to the race he did not think he was going to make the start at all. 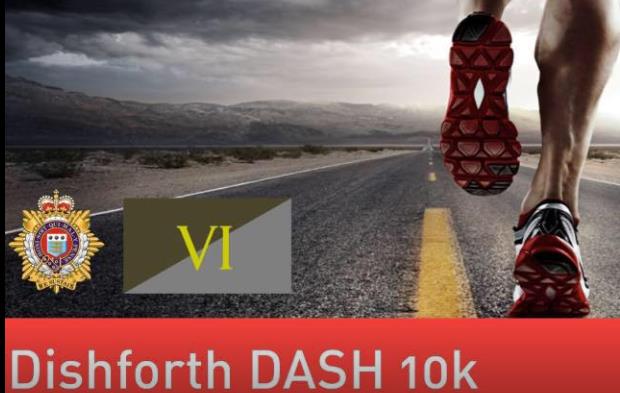 Race day came and me, John and Simon travelled down together to a clear, sunny but windy Dishforth

As you passed the entrance to the main camp I noticed the armed guards (note, don’t upset the marshals on this race). There was no problem parking but there was a long queue for the numbers so not much time for a warm up if you were in the S-Z line.

The race got under way and we all set off in quite a tight bunch and with words of encouragement (or that’s what I hope they were shouting) we all settled into our own races.

My guide was just to keep as close to a 4 min/k as possible and try not to go off too fast but the wind was going to be a problem as there is no shelter on an airfield apart from the other runners.

The 1st lap went to plan and with other runners still in bunches you got a bit of a rest from the head wind down the 1k straight but on the 2nd lap the runners were spreading out and I had a decision to make, whether to tuck in behind a runner down the long straight and hope to pick up the pace again on the return. So that’s what I did, but as it turned out I only followed the runner half way then had to go past, as I watched the pace falling away (you can see the result on my heart rate on the right of the details below! Not sure what happened when it goes off the scale, must have been thinking about the sprint finish!) 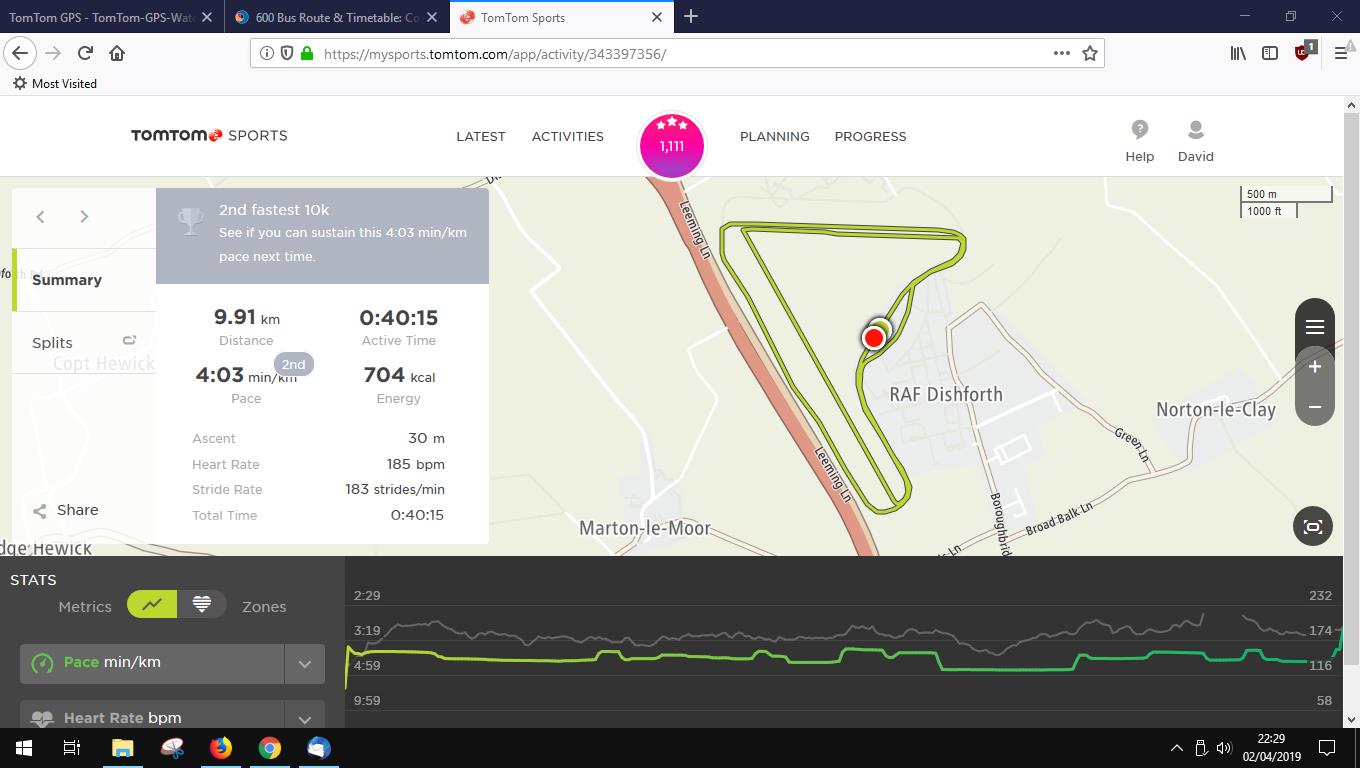 I spent the rest of lap just trying to get my average pace back to 4 min/k and looking for other runner to act as a wind break as I turned back into the wind for the finish,

I did find one at about 8.5k but he pulled up with a hobble before the final straight (obviously oblivious to his new role as my wind break!)

I managed to get over the line in 40.12 chip time which was the closest I have been to a sub 40 10k and this is definitely a quick 10k course given the right conditions (no wind!)

So the chase goes on I just need a straight, downhill, course with a following wind on the day! 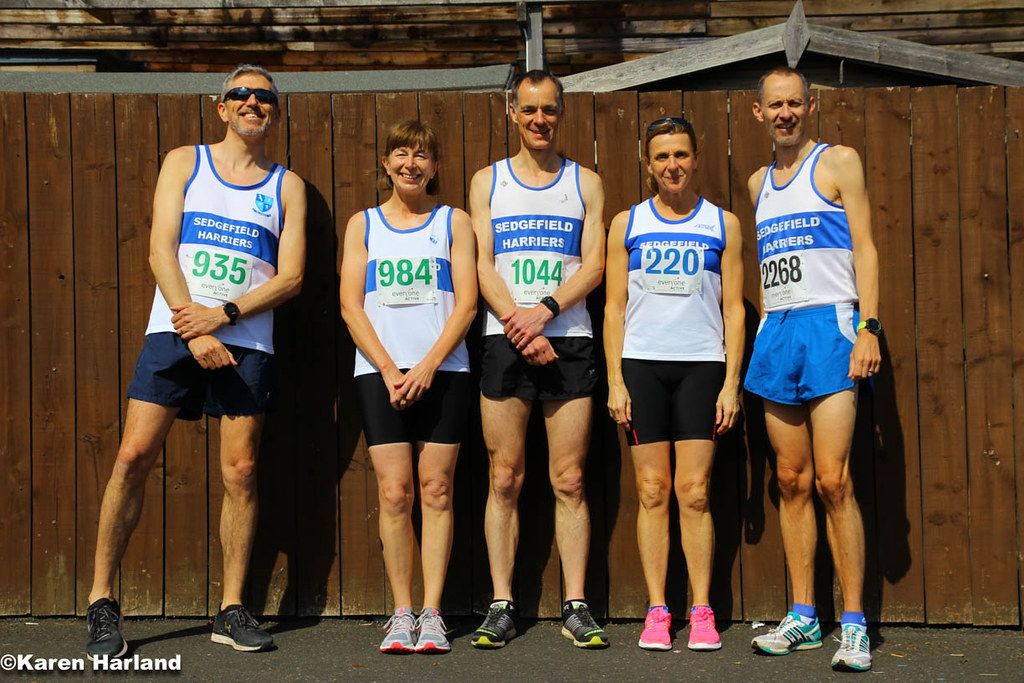 Well after the previous two attempts were scuppered by the prevailing weather, conditions and undulating courses, this was probably going to be the last attempt at a sub 40 before September, due to increasing temperatures and triathlon training.

John had come across this race via Roger who had raced it numerous times in the past and set some of his 10k PBs on the course, so after finding it I duly signed up and watched the weather forecast with fingers crossed. 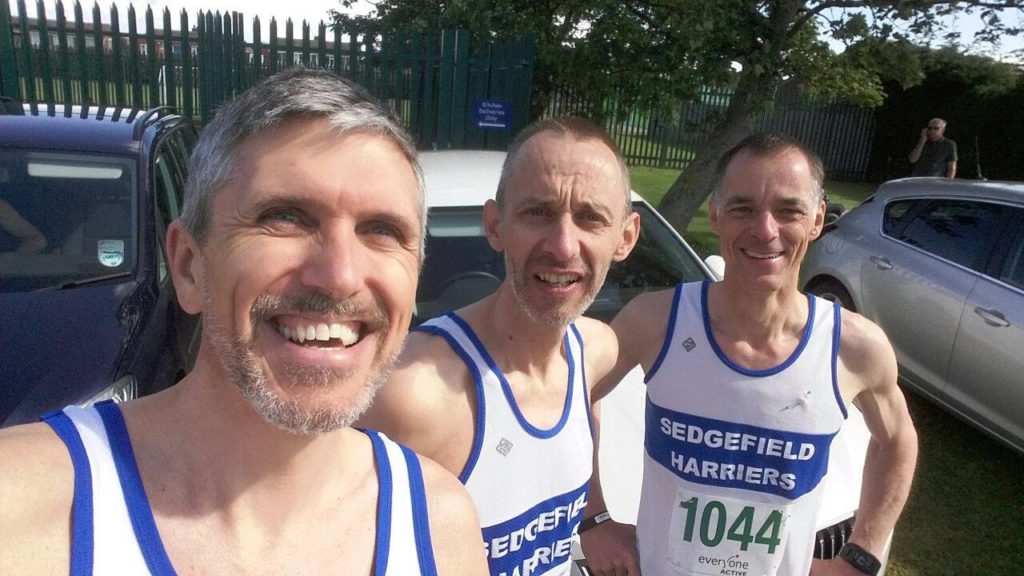 As race day arrived we boarded the crew bus (Thanks for the lift Roger) and headed off for the race, I was informed from John I had a new mascot (Roger) on this 3rd attempt. I think John was feeling the pressure of the previous two attempts, even though I did say to him I would not force him to go to every flat 10k until I made it.

We made the start in good time, picked up the numbers, bumped into Julia and Janet for a chat and made the final obligatory toilet stop before the short walk to the start.

The route was a loop around the housing estate, out onto the seafront towards Redcar, with a double loop on the end then back down the front to Marske with the finish flag on the seafront.

After the race director’s quick talk (make sure you run over the timing mat and avoid the traffic) we wished each other well and were off. 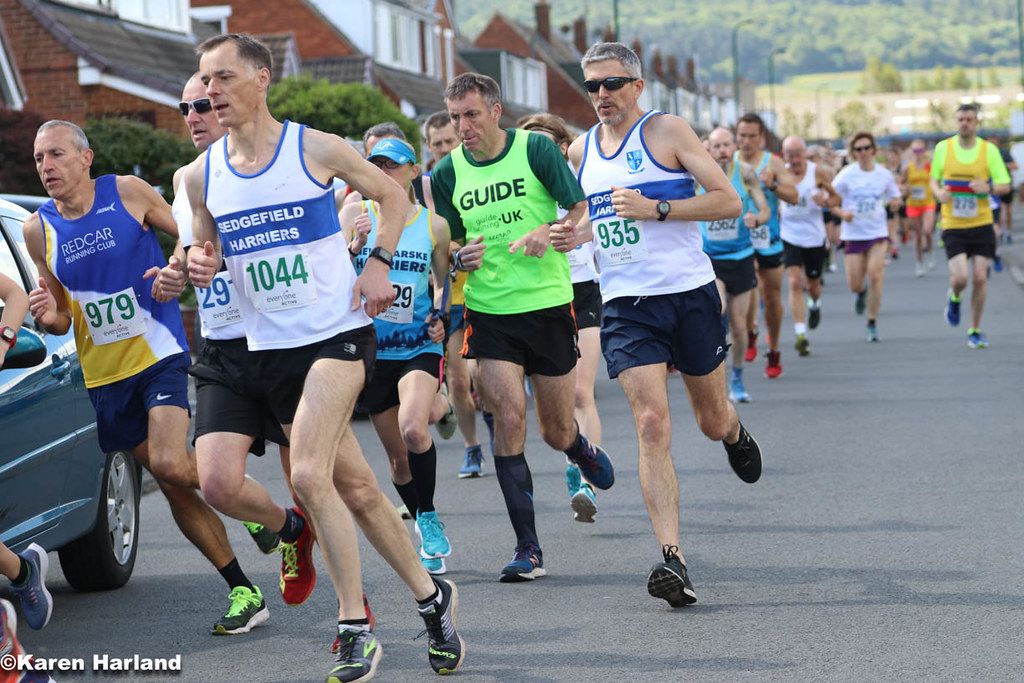 Roger said he was not 100% but set off like a rocket leaving me and John setting a pace close to 4min/km. My plan was the same as the other races as I thought I would be looking at just getting under the time, so I would try to get to 9km as economically as possible at a 4min pace, then hope I had enough left to keep pushing to the finish. 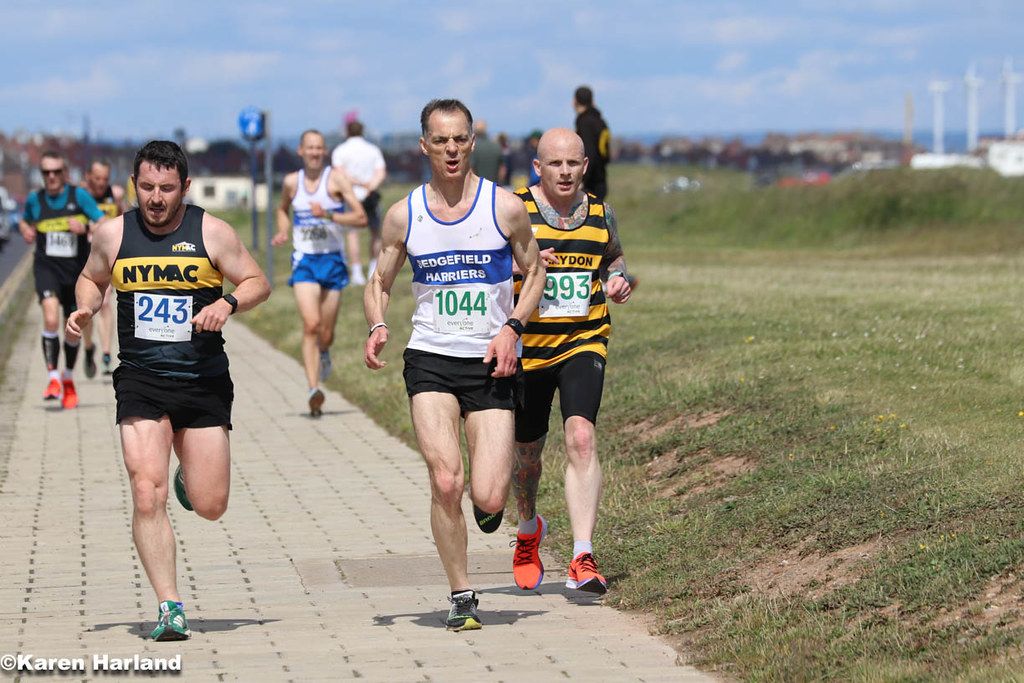 When we got onto the front I found myself running with a New Marske Harrier who looked to be running the same pace and I guessed he knew the course, he also made a good wind break on the way out. 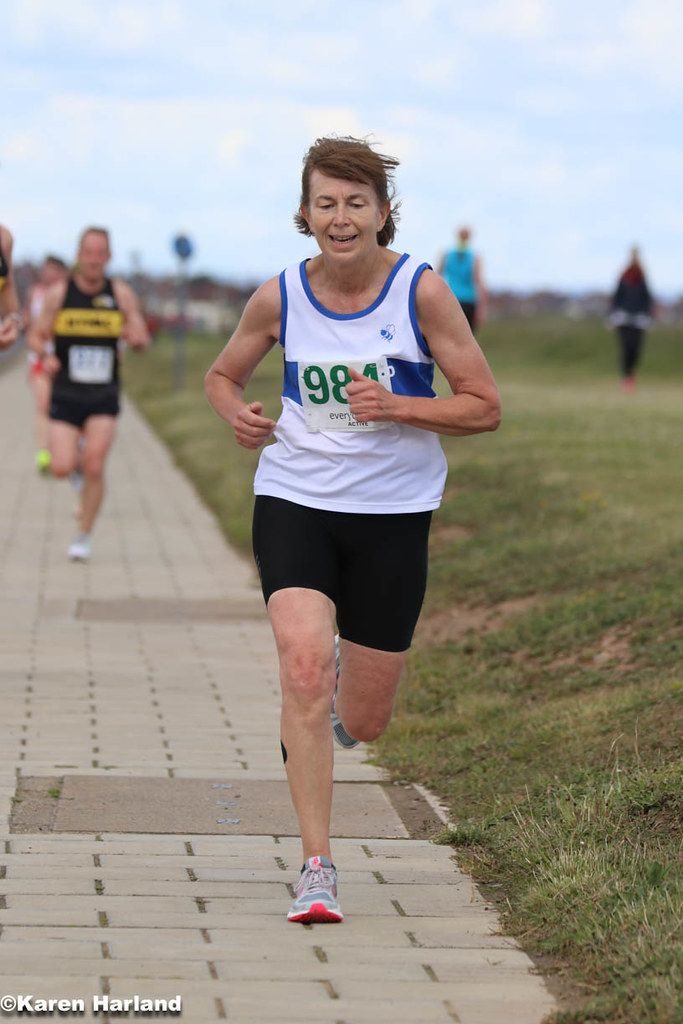 Up to about 8 km there was not much to say. I ran, checked the pace, ran, checked the heart rate, ran. It was about this point when I caught Roger and as I passed he gave me some words of encouragement (I was hoping he was still on for a sub 40) as my watch was not beeping on the km markers any more so left me wondering if it was going to affect the pacing. 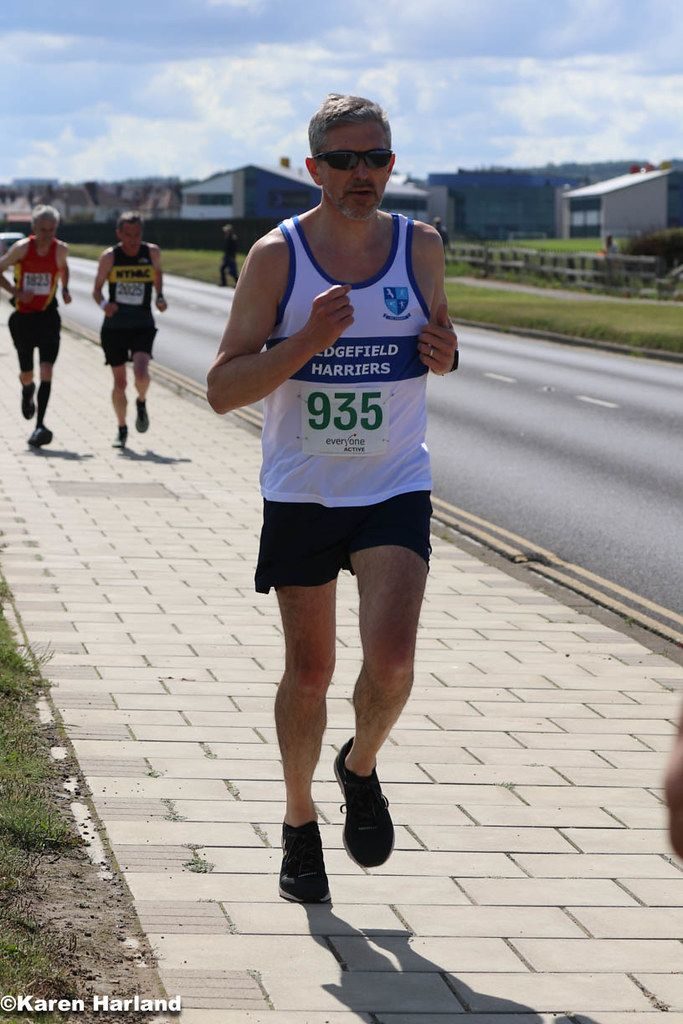 As I got to the 9km I remember thinking ‘well I have got this far’ and the pace was about right. It was all about the last kilometre and I didn’t fancy doing it all again if I end up at 40:00. Should I look at my pace or heart rate? Would I slow down if it said 200 BPM? Not likely! 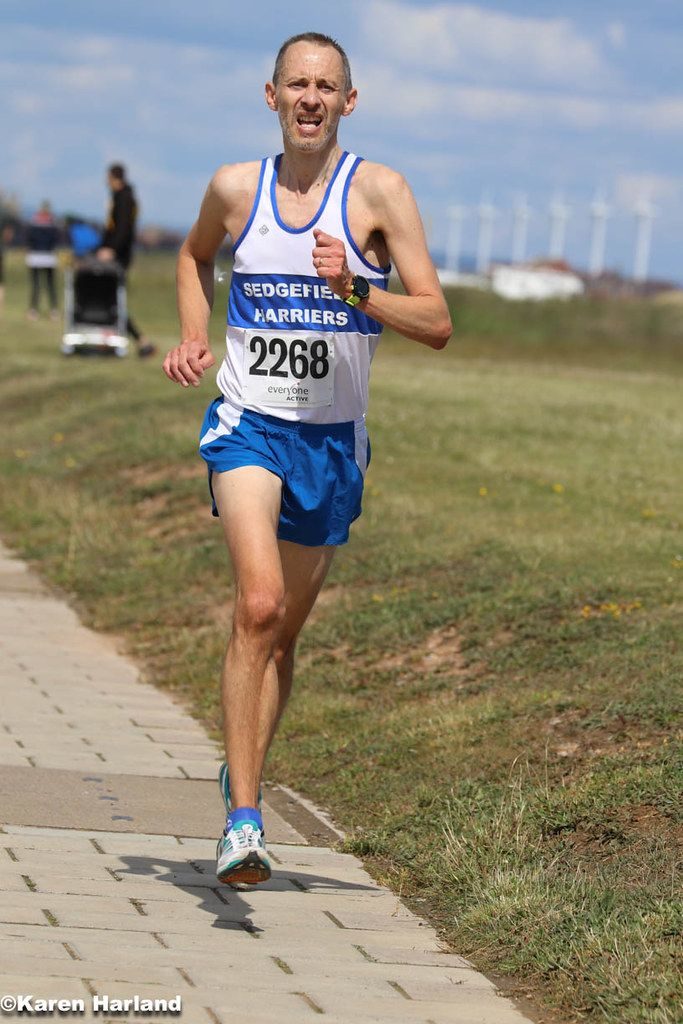 As the Marske Harrier slowly pulled away, another group formed around me (it’s funny how you feel you’re running well if you’re one stride ahead but hanging on if you’re one stride behind) so I decided the best course of action was just to run as fast as I bloody could to the flag. If they came past, well I could not complain. 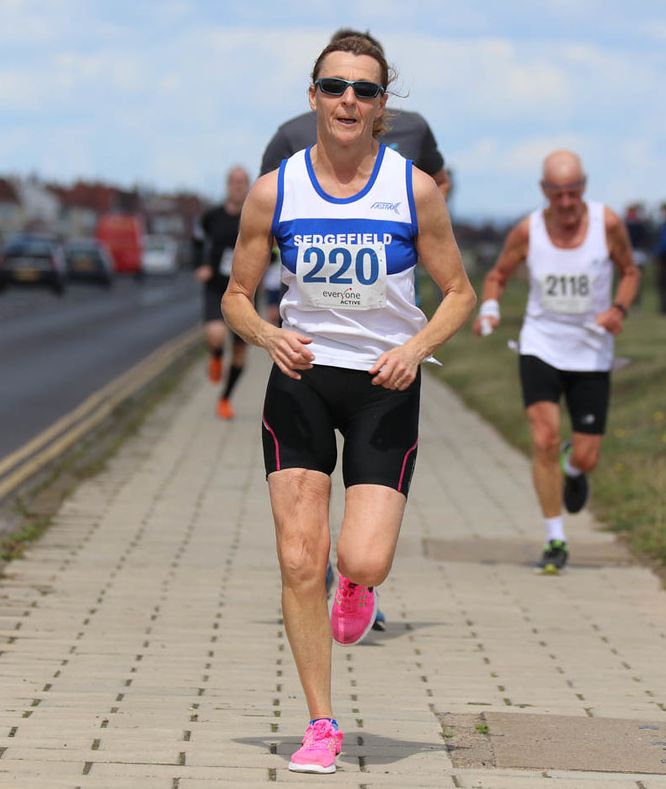 The last few metres were caught on camera, me with a definite grimace on my face but the runners around me looking fine. Still, they all helped keep me going or pushing me on in some way on the day.

All the Sedgefield Harriers appeared to have good runs on the day and it was a nice spot to finish on the sea front (see below for results).

As it turned out when I looked at my watch I had gone under by some way but I had a double check with Roger after the race: another sub forty to add to his list (job done!!!) now what next? Well a pacer for Mr Haycock would be a good start! 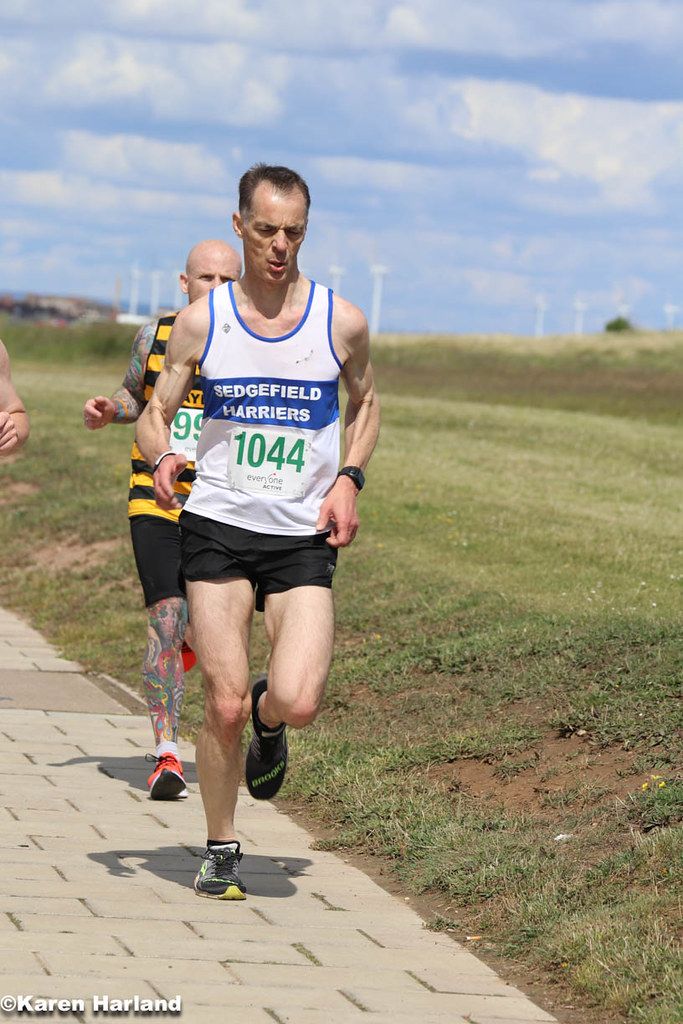 It’s funny not that long ago sub 40 was not something I gave much thought to as knocking 5 or 10 seconds off a PB could take some time. But I surprised myself a couple of times last year with 10k times and you start to think, well maybe I can?

If you have a goal in mind just keep chipping away at it, you might just surprise yourself too.