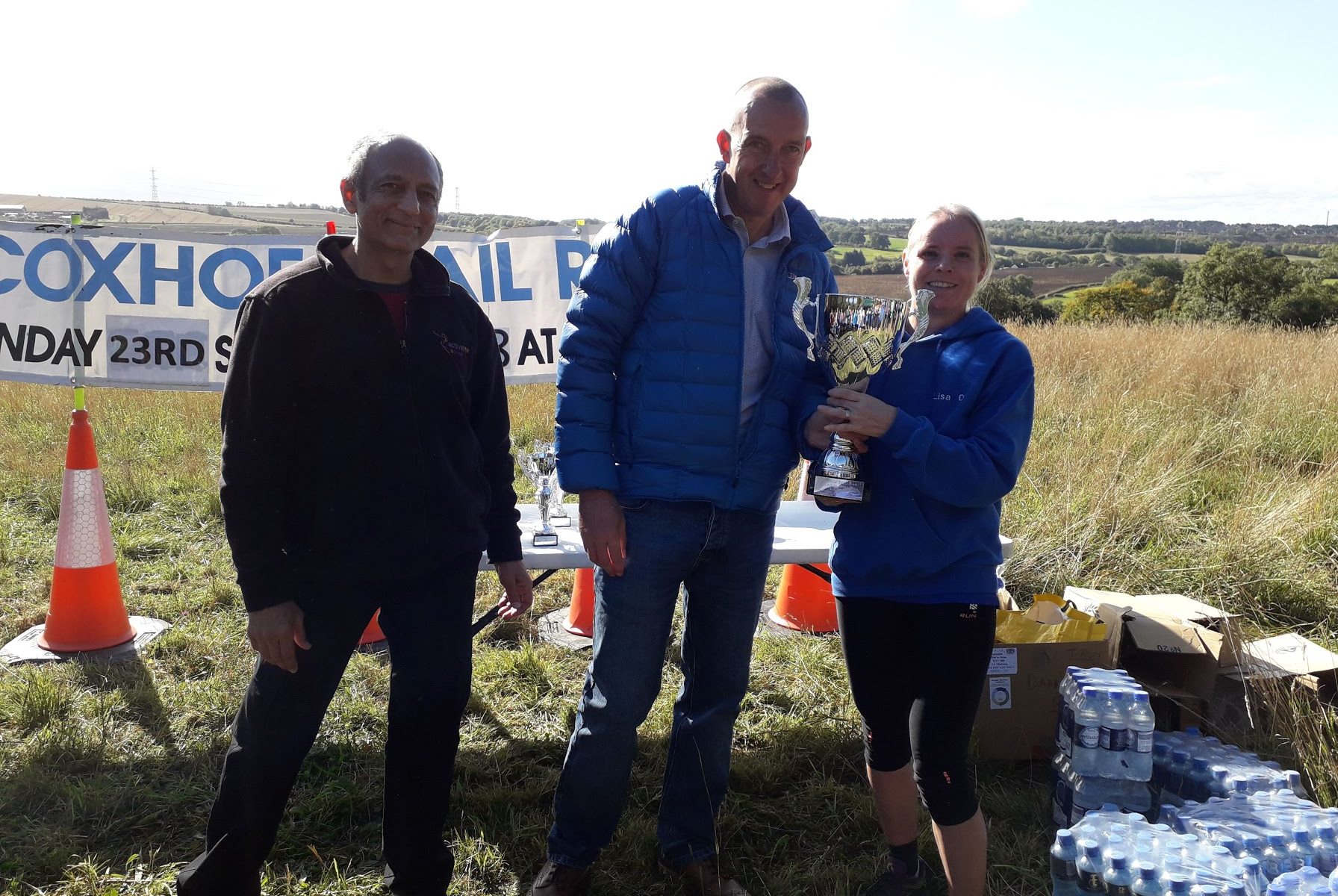 Coxhoe Trail 10k, 23rd September 2018. A coolish but pleasant morning for racing. This run was re-established in 2014, with the original Coxhoe 10k on a different route dating back to the 1980s. The modern version was put together by local runner Iain Twaddle and our own Ean Parsons and attracts a decent number of Harriers. The course is a good one, an out and back along the old Kelloe railway line, with a loop around the plantation (‘pit heaps’) at the far end. This doesn’t really hint at the two or three taxing hills on the route, the last one a particular energy sapper, especially with another half mile still to go once back at the top before the finish. The finish area is where Coxhoe Hall used to stand (once the home of the Victorian poet Elizabeth Barrett Browning) and offers a good vantage of those struggling up the final hill. Well, I always struggle anyway.

Registration is down at Coxhoe Leisure Centre, followed by a fifteen minute walk up to the start/finish area in the woods. This year I got chatting to folks at the finish area for too long and only just got to the start in time. It meant I was right at the front and after just the briefest of intros we were away. I’ve never started a race so quickly. I dare not do anything other to avoid tripping other front runners and only eased off once we were halfway down the first hill. Turns out it was a successful tactic as normally I’m tripping over folks on this bit myself. I kept a decent pace throughout, for me, and beat my best time in five attempts at the course by a minute and a half. The organisers moved the date back three weeks this year, to avoid Tees Pride 10k, and I think the cooler morning helped too. Either way, I was pleased with my performance.

A record 200 runners completed the event this year. First Harrier was Ben Smale (a Coxhoe lad) and first female overall was Lisa Darby, a brilliant effort. A special mention also to 15 year old Daniel Avery-McAleese who finished 33rd overall in 44 minutes. Fifteen Harriers in total took part. It’s a great local event and even more next year would be super.

Full results can be found at: http://www.activelifecoxhoe.co.uk/downloads/Coxhoe%20Trail%2010k%20Results.pdf

This race doesn’t need much of an introduction, with it being perhaps one of the most iconic half marathon races in the world. Being a fairly novice runner I wanted to set myself a challenge and with the race pretty much on the doorstep I thought why not enter the ballot?! Training in earnest started in June and I gradually built up the miles through the weeks. Then came race day – my first attempt at 13.1 miles! I think I was more nervous in the morning about getting to the start line having read a lot about busy metro lines but in the end it all went smoothly and I even had time to meet up with friends from work who were also racing.

After that, it was time to go to the start along with approximately 43,000 other people, unfortunately I didn’t see any of the other 21 Harriers who were also racing. It is quite an experience to be lined up with that many people and to know I was in the same race as Mo Farah!

I crossed the start line 12 minutes after the gun went off, I thought it was going to be busy at the start but we were all pretty well spread out. I went off too fast (definitely need to work on my race pacing) but as I got down towards the Tyne bridge I tried to settle into it, however that proved tricky with so many people on the road. This wasn’t helped by people starting to walk at around 3 miles, if you’re doing a half marathon do some training!

By mile 7, the legs were starting to complain, time to dig in, and focus, however easier said than done with everything going on and the heat. Had to make use of all the water stations and the showers and by mile 10 I was beginning to slow, the long drag uphill really does take it out of you. It was quite a relief when it levelled out. Then there was the short downhill to the sea front, round the corner and then the end was finally in sight, but that last stretch, it felt so far. I never thought the finish line would come but getting closer I took one final look at my watch, saw there was a chance to still get under 2 hours and just went as fast as I could (admittedly not that fast at the end of 13 miles) but crossed the line exhausted in 1:59:47. I’d done it, first half marathon completed and really pleased to meet my goal of sub 2 hours, even if it was only by 13 seconds!

I am glad I can tick the Great North Run off the list, but I won’t be entering the ballot this year – too many people and the logistics of trying to find the family afterwards and getting home put a bit of a dampener on the day. However, it certainly gave me the bug for running, I’m hooked now!