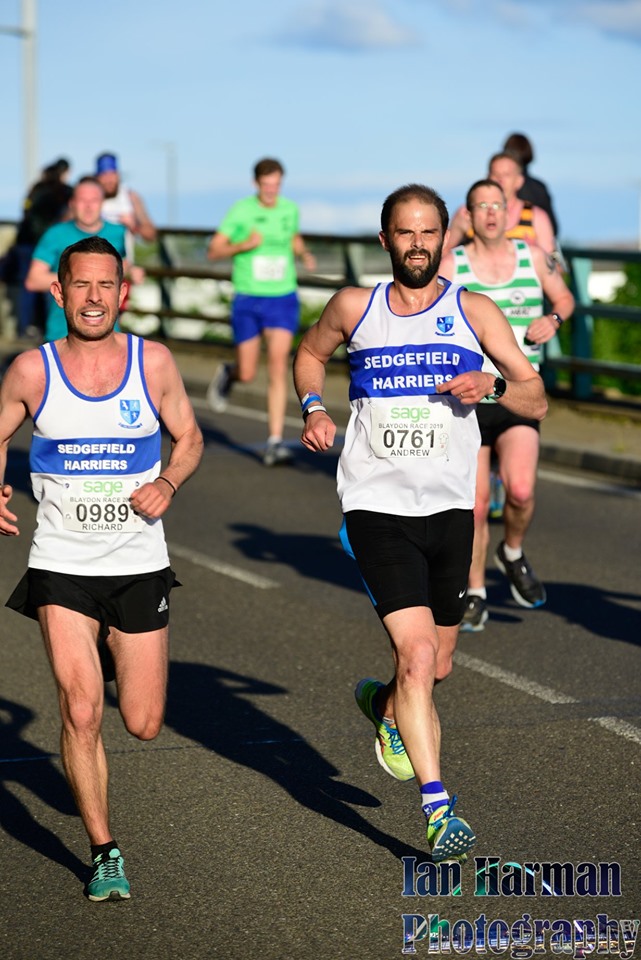 Somewhat belatedly, a race report from this years Blaydon Race.
This race, though not the most scenic is a special one for me. It’s based on the original horse race, which started in 1862. Less than a month after I was born I was taken in my pram to watch the centenary race. Clearly this must have been a sign and 49 years later I ran my 1st Blaydon Race. I’ve now run a few in succession, attracted by the bottle of beer and ham and peas pudding bun you always get at the finish. 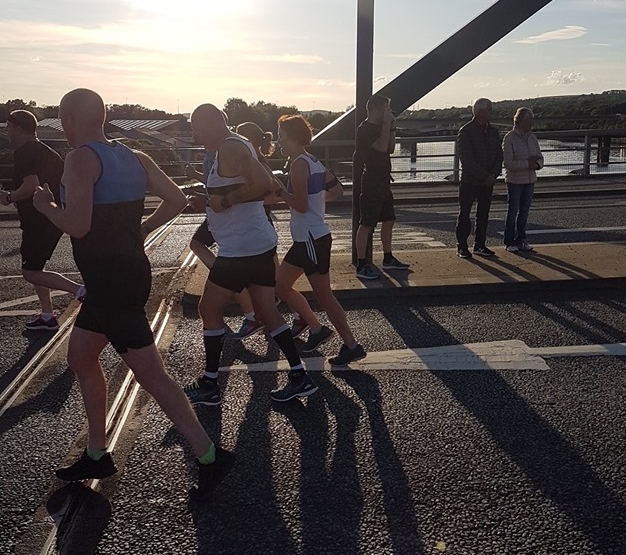 The race starts in the centre of Newcastle down from the Bigg Market, a part of town transformed from it’s usual clientele on the night of the race. There are often cancan dancers at the start and of course the obligatory rendition of The Blaydon Race song. I am word perfect on this , having learned the words as a child, living in Blaydon as I then did. In days gone by when car radios and subsequent in-car entertainment didn’t exist, my family sang the words of all the Geordie songs when on car journeys, the Lambton Worm and Cushie Butterfield being the other songs in our repertoire. 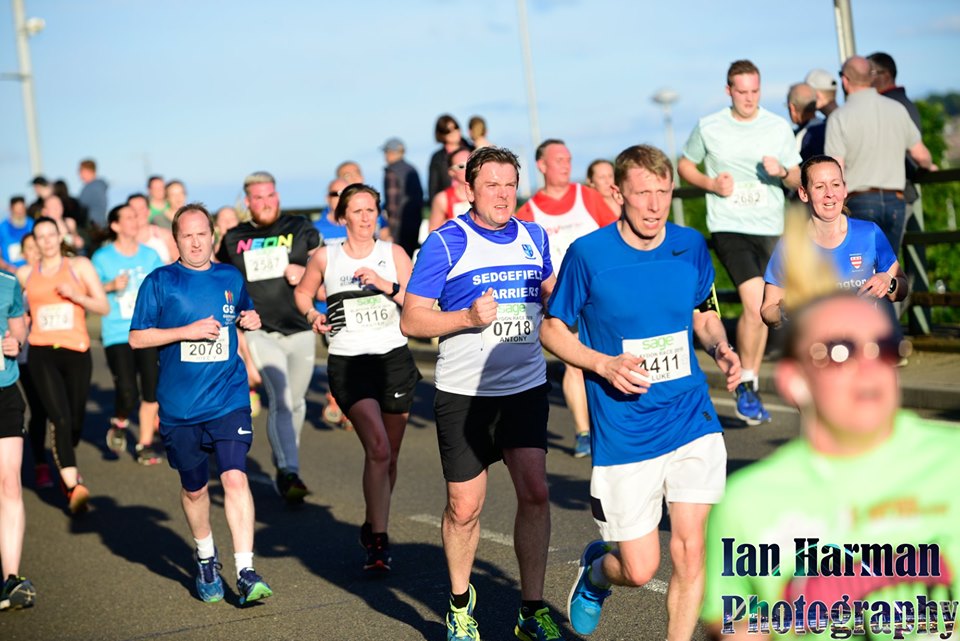 The mayor rings his bell and the race gets underway. There’s always a bottleneck a few hundred metres from the start near the Central Station where you have to walk at my section of the race. Then it’s past the Life Centre and heading towards the Arena before the never ending Scotswood Road stretches out. This year it was baking hot with no shade along this long road. I so wanted a water station anywhere along here, but alas there was none. 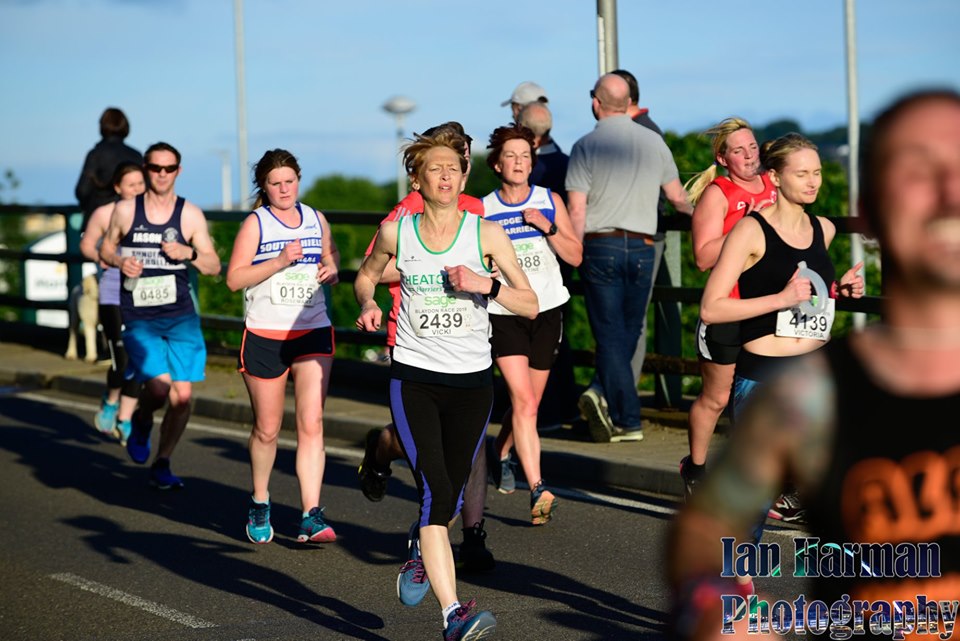 Eventually you get to the Scotswood Bridge and cross the River Tyne. I’d seen Mark Raine and Andy Featherstone run off in the distance , and David Round overtook me long before the bridge. After the bridge you run away from Blaydon on the south side of the river, eventually reaching the turnaround point and start heading back towards Blaydon. The water station eventually appears and I had to stop and take on some hydration even though it was less than a mile to the finish. It was desperately needed and helped me get up the gradual climb on the dual carriageway. In previous years there have been medical incidents on this section, but fortunately I saw no evidence of any this year and reached the top of the climb to enjoy the gradual descent and then U turn towards the finish. This came earlier than usual in Morrison’s car park this year shortening the race a little from previous years. 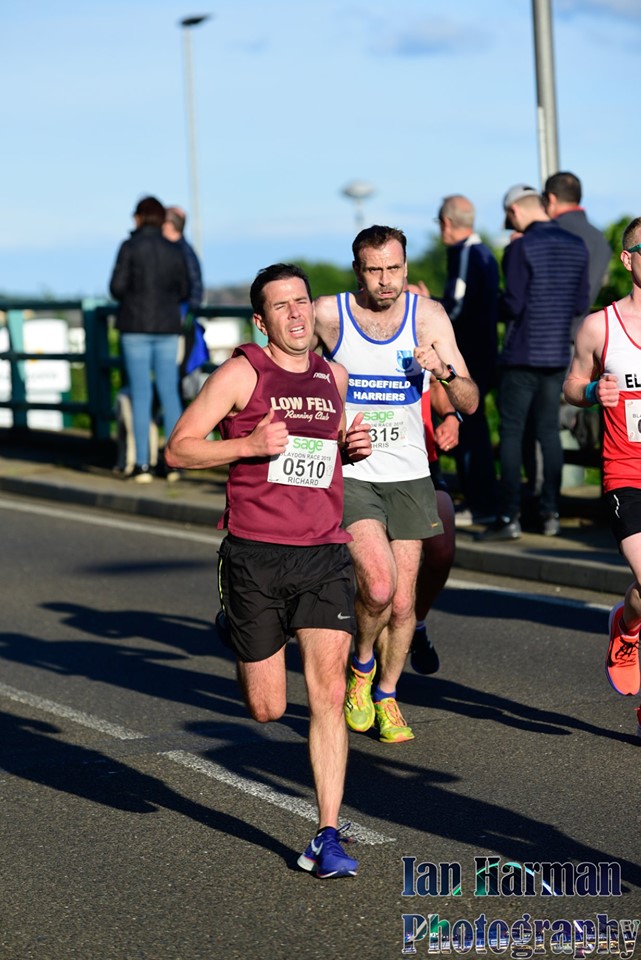 The finish is always crowded but well organised with your refreshments and T shirt handed out quickly and I headed off to try and find my chauffeur Tom who had been happy to drop me off in town close to the start and then drive to Blaydon where he had luckily found a spot to park up and wait for me. Other Harriers taking part were Mark Raine, Andrew Featherstone, Barry Johnston, Dave Sawyer, Ian Hedley, Antony Edwards and Chris Lines. 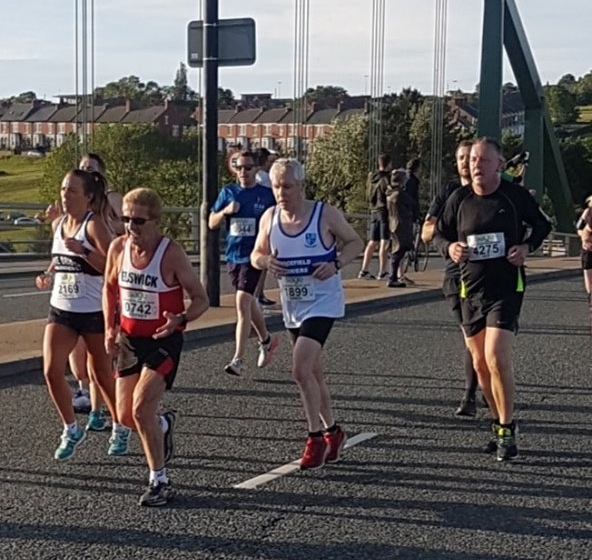