I have taken part in races at the Kielder Marathon weekend every year since the event was launched in 2010. In that time, I have been part of a relay team in all of the Kielder Run-Bike-Runs, usually as part of the ‘Sedgefield Specials’ with Roger Whitehill and cyclist Ian Dunn. In recent years, I’ve also returned to Kielder on the Sunday to tackle the half marathon. I love both events; being part of a team in the run-bike-run is always fun, while the half (added to the weekend about four years ago) follows a challenging, but attractive route that includes parts of the full marathon course.

However, until this year, I had never tackled ‘Britain’s most beautiful marathon’. For the tenth event, I made a late decision to scratch that particular itch and booked a place a few weeks out. On the Saturday, Rog, Ian and I travelled up to Northumberland for our annual date at the Kielder Run-Bike-Run. This year, ours wasn’t the only Sedgefield team in the race. David Bentley, Rob Spink and Mark Raine grabbed third overall with an impressive performance, while we were a respectable fifth. Young guns Ciaran Lines, Tom Hearmon and George Hampson also finished in the top ten. Meanwhile, Tracy Henderson was second overall in the women’s individual race, a place higher than last year’s excellent result. On the same day, Karen Killingley and Jennifer Chaytor completed the Kielder 10K. 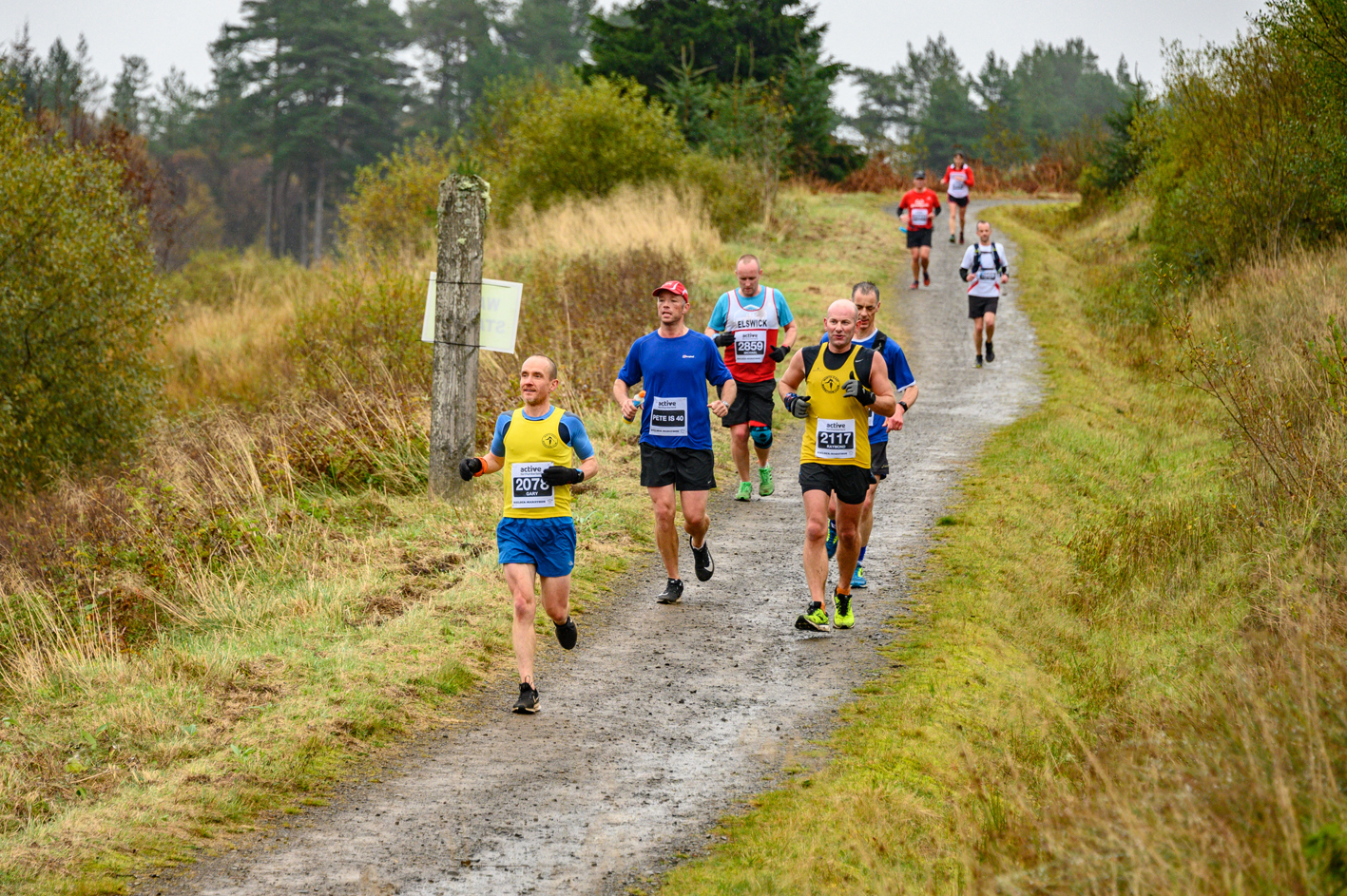 I was back up at Kielder early the following morning for the start of the marathon, along with Gary Thwaites (for his 98th marathon!), Ray Carmichael, Dave Walker and Lisa Darby. I had already decided to not put pressure on myself by targeting a fast time, partly because I had always intended to really push myself in my 11K leg the previous day, partly because I knew it was a tough course, and partly because I hadn’t been training for a marathon. However, I wanted to aim for somewhere between 3:30 and 3:45. Chatting to Gary, Ray and Dave ahead of the start, I established that they had important targets in York the following week, so were planning to run a steady pace, aiming to finish in a little under four hours. I was tempted to join them in that, but decided to stick with my plan and set off with that in mind. This meant that I went out a bit faster than my fellow Harriers, but I soon found myself running in other good company.

The opening few miles were very familiar, following the same route as the first leg of the run-bike-run, and establishing a familiar pattern of undulations and the occasional challenging switchback hill, all in stunning surroundings, even on that dreich day. For regular participants in Kielder Marathon events, there has been an in joke for years about Northumbrian Water’s ‘Steep Incline Ahead’ and ‘Steep Decline Ahead’ signs, which used to appear with alarming frequency along the course (and featured on the finishers’ t-shirts one year). Although those signs are no longer employed as zealously as in the past, they do pop up every so often and are a fairly regular reminder that running around Kielder Water doesn’t involve following a straightforward, flat lakeside path. It’s lumpy up there. 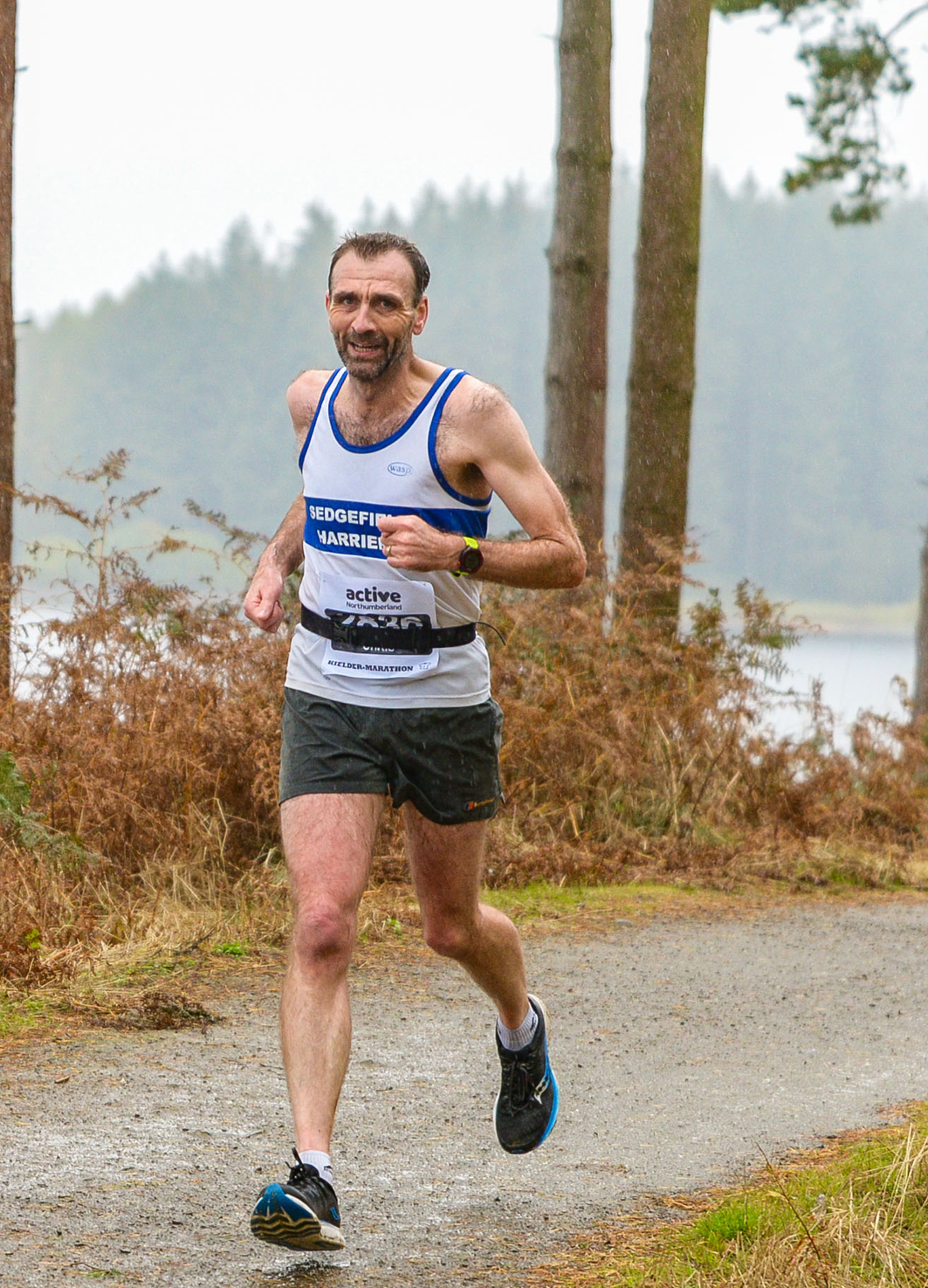 Despite the remoteness of the location, there were spectators out along the route, offering encouragement alongside the ever-brilliant volunteer marshals. I settled into a comfortable pace that I was able to maintain and then moved onto a section of the route that I hadn’t run before, around the north west corner of the reservoir, before heading east along the northern shore. It was during miles seven to 17 that I really started to appreciate just how beautiful the setting is, and that certainly seemed to help me along.

For me, one of the biggest challenges in a marathon relates to nutrition. I can’t digest sucrose or maltose, which really limits my options for energy replacement. I still haven’t found anything that can do the job of a gel, so if I ‘bonk’, then I’m in big trouble as I can’t take anything to give me a quick boost. Earlier this year, I managed to find a Swedish brand called Nick’s that makes genuinely sugar free chocolate and some of the company’s products incorporate seeds and nuts. So, I carried a few of those and maintained a discipline of eating one about every hour during the race, managing to coincide each with the lead up to a water station for washing down the chocolatey goodness. For possibly the first time for me in a marathon, this plan seemed to work as intended and I don’t think that I ever really properly hit the wall. I was certainly knackered towards the end of the run, but that was more due to the fact that I hadn’t run anywhere near the distance since January and my limbs were screaming blue murder.

Anyway, back to the marathon course. I had been warned that one of the tough sections was at around 14 miles. So it proved, with a tasty, sustained switchback climb through the woods. Being prepared for it helped and I worked hard to not work too hard, if that makes sense. After that, I enjoyed (genuinely – look at the uncharacteristic smile in the pic!) several scenic miles heading towards the dam, gradually gaining a few places along the way. I was also caught by a couple of runners, who trotted off ahead of me, but I didn’t try to stay with them like I might have done in a shorter event. Stick to the plan Chris, stick to the plan.

By the time I reached the dam (the only significant flat stretch of the day), I was back on familiar territory, as the marathon was by now sharing a route with the half. Psychologically, this was a double-edged sword. On one hand, I knew what was ahead in the last eight miles and could prepare myself for that. On the other, I therefore also knew that this included a brutal, multiple switchback climb in the 22nd mile, the toughest section of the whole marathon. At least it didn’t come as a surprise!

By this time, the weather had closed in and it was raining steadily, but that didn’t concern me. I reached that crux hill still feeling okay and, crucially, I managed to run from bottom to top without slowing to a walk (even if my pace was barely above a walk, my method of movement was a run and in my mind, that was very important). Once I reached the top without any ‘damage’, I knew that I was going to be okay. Complacency is very dangerous in a marathon and can easily happen when you’re tired and struggling to concentrate, but I kept my head and continued to stick to the plan, eating my last bar of chocolate despite not feeling like I needed to.

The last four miles were tough and my lack of training/marathon conditioning did slow me down a bit, but some of the runners ahead of me were slowing even more and I gained a few places between miles 22 and 25, including one of those who had overtaken me about nine miles earlier. Again, that helped my head. The last mile and 192 yards were actually enjoyable. I caught the other person who had passed me earlier, along with another runner, and even managed to put in a modest sort-of-sprint for the line. I finished in 3:34:39, which was towards the faster end of my target ‘window’, and therefore more than satisfactory. All of the Harriers who were taking part in the 2019 Kielder Marathon finished in times of under four hours, which was great running all round. I think that Lisa got around in just under 3:41, only a week ahead of her brilliant club record in York. Meanwhile, Marie Walker, Ian Hedley, Emma Featherstone and Christine Hearmon also ran well in the Kielder Half Marathon. 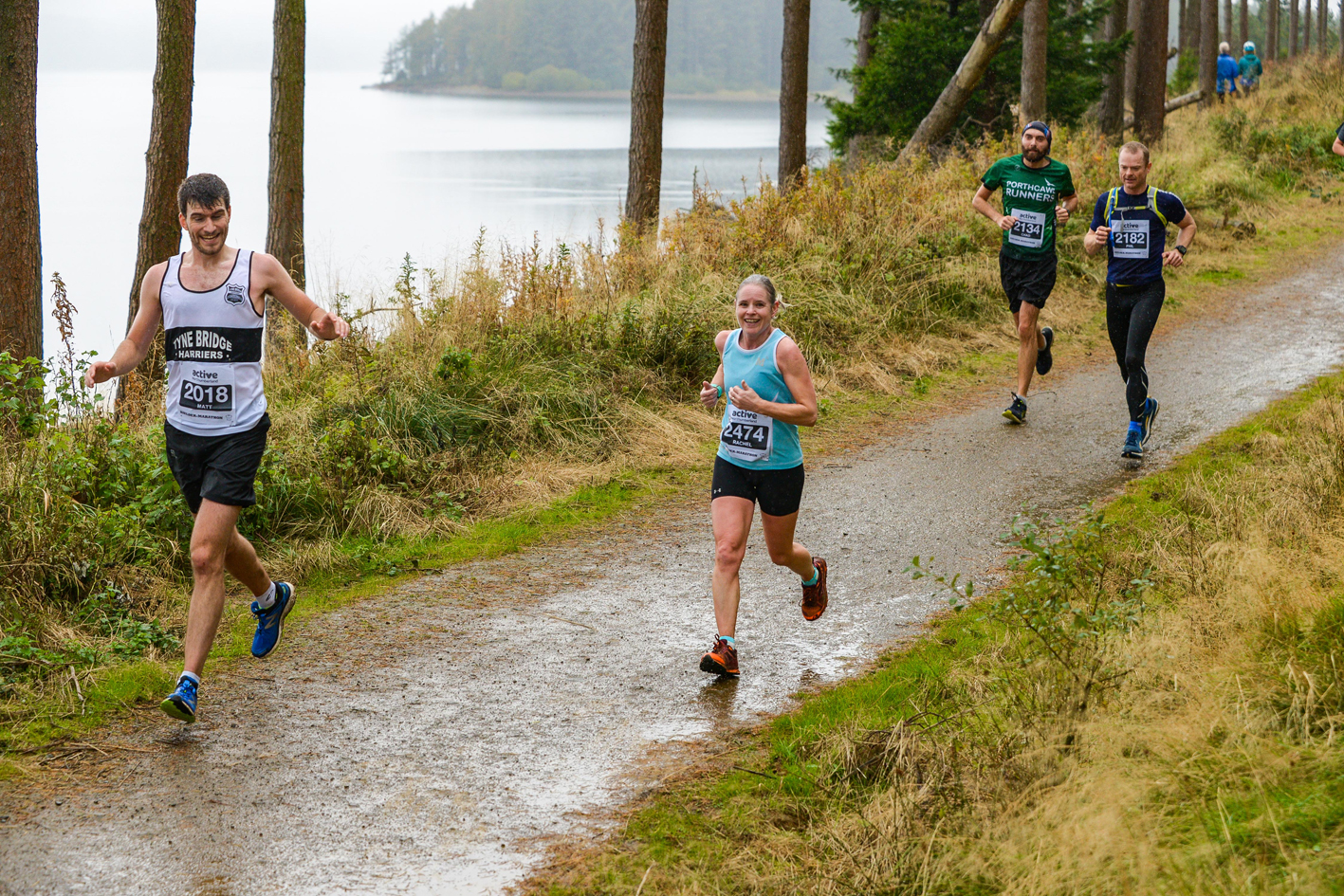 I can heartily recommend the Kielder Marathon, not for a PB (unless you haven’t run a marathon before!), but certainly for the atmosphere and the amazing scenery, which definitely lives up to the billing. And If you don’t want to tackle the full marathon, there are plenty of other events to choose from over the weekend. Next year’s events will be on 3rd and 4th October. Find out more at www.kieldermarathon.com, and make sure that you have a plan…