Sunday Morning runs are good for many things, fresh air, exercise and coming up with slightly crazy ideas. It was on one Sunday morning that I decided that it would be a great idea to lure my fellow Harriers into a relay for 24 hours. Garnering interest was, for some inexplicable reason, not as easy as I predicted. Underhand tactics were required for a few while at least one person volunteered. At one point I thought we might get enough for two teams but fate (good sense) intervened and on race weekend, five brave Harriers made it to Gibside.

The first mile was getting from the car park to the start of the race. Raine was “pulling a Bentley” but managed to get there for the first lap with 5 minutes to spare. The plan was to all run the first lap together and get a feel for the course. All lined up on the start with the dedicated 24 hour runners, a short count down and we were off, well four of us. Ella decided that she wanted to run and was not going to be denied. We were lagging behind quickly and after 100 m turned back to return her to the start. My second start was to a fanfare of tears as I sprinted away to catch the others.

The sprint start soon deteriorated when I hit the first hill, it did not seem too bad though and I caught up to the pack, most were running together at this point. We then turned THE corner and the first hill loomed into the distance. Sensible runners started to walk at this point as it was a very long race. Mark R, Eric and I were still running together with Pete and Mark C behind. 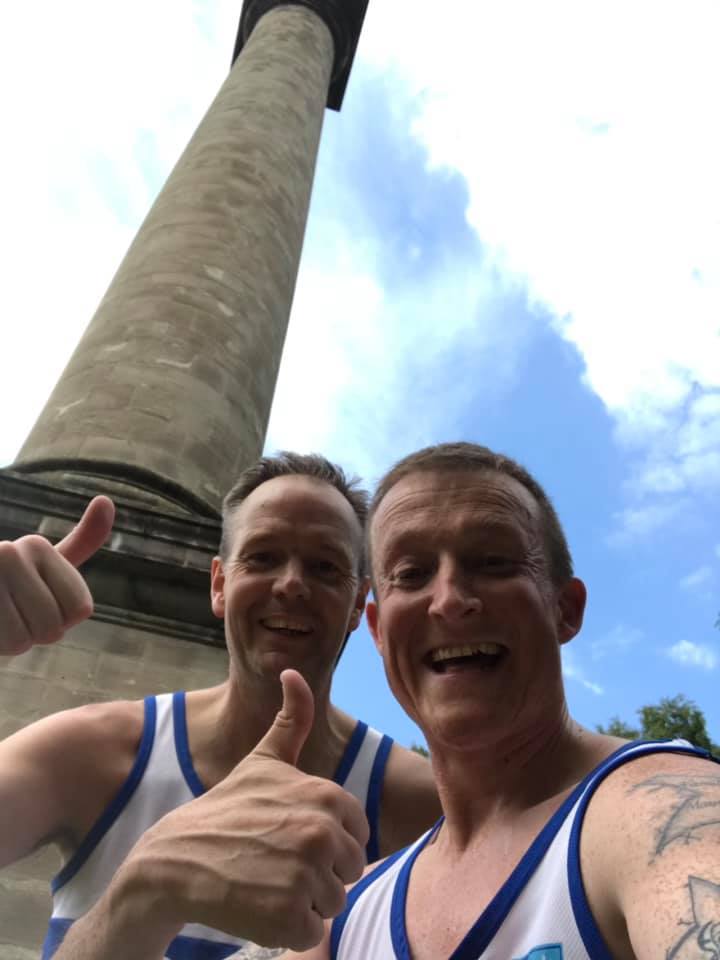 A long section of downhill took us past the stables and then turned up into an unending climb, a slow draining climb that while runnable was mental torture. Finally at the top there was a beautiful view down the valley to a spire in the distance. The descent, while welcome, was not as easy as it could have been, a bit steep and it gave a good jarring to the knees.

The bottom of the hill was at mile 3 and a sharp turn brought us into a nice path along the woods, past the bear cave and up, up, up the last climb (A short sharp affair). The last half a mile was a meander through the woods past the spire (Salute to Liberte) and back to the finish. We stopped to wave Mark R on his way round the second lap (his prize for being the last to arrive).

A well-earned rest ensued with ice cream. The hardest part of the weekend was then getting all the stuff from the car to the camping area. I might have over-packed and with a full cool bag of food (most of which never got eaten) it was a lot to carry. 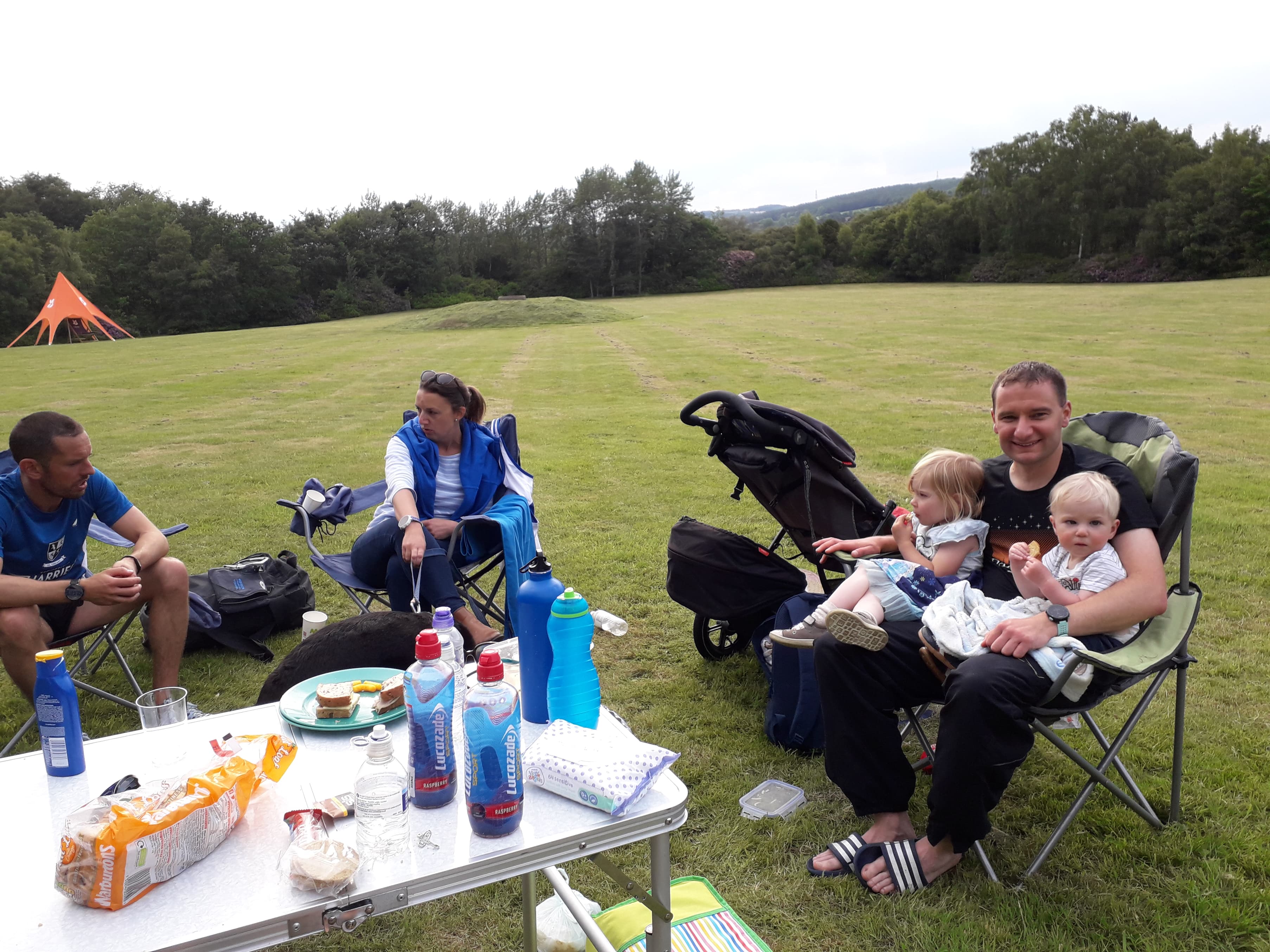 Lap two soon came around. My first chance to run alone, I walked the hills this time but set myself targets of where to get to and when to start again. This worked out well and lap two passed (without seeing another runner) in a similar time to lap one. Mark C and Pete decided to run a few laps together just so that we would all be able to do a few extra miles (Thanks guys).

We had gathered a crowd of supporters by this stage, Gary, Ray and Jane were running the evening marathon and team Spinks had arrived in full force. Paula and Amy were also present for support. 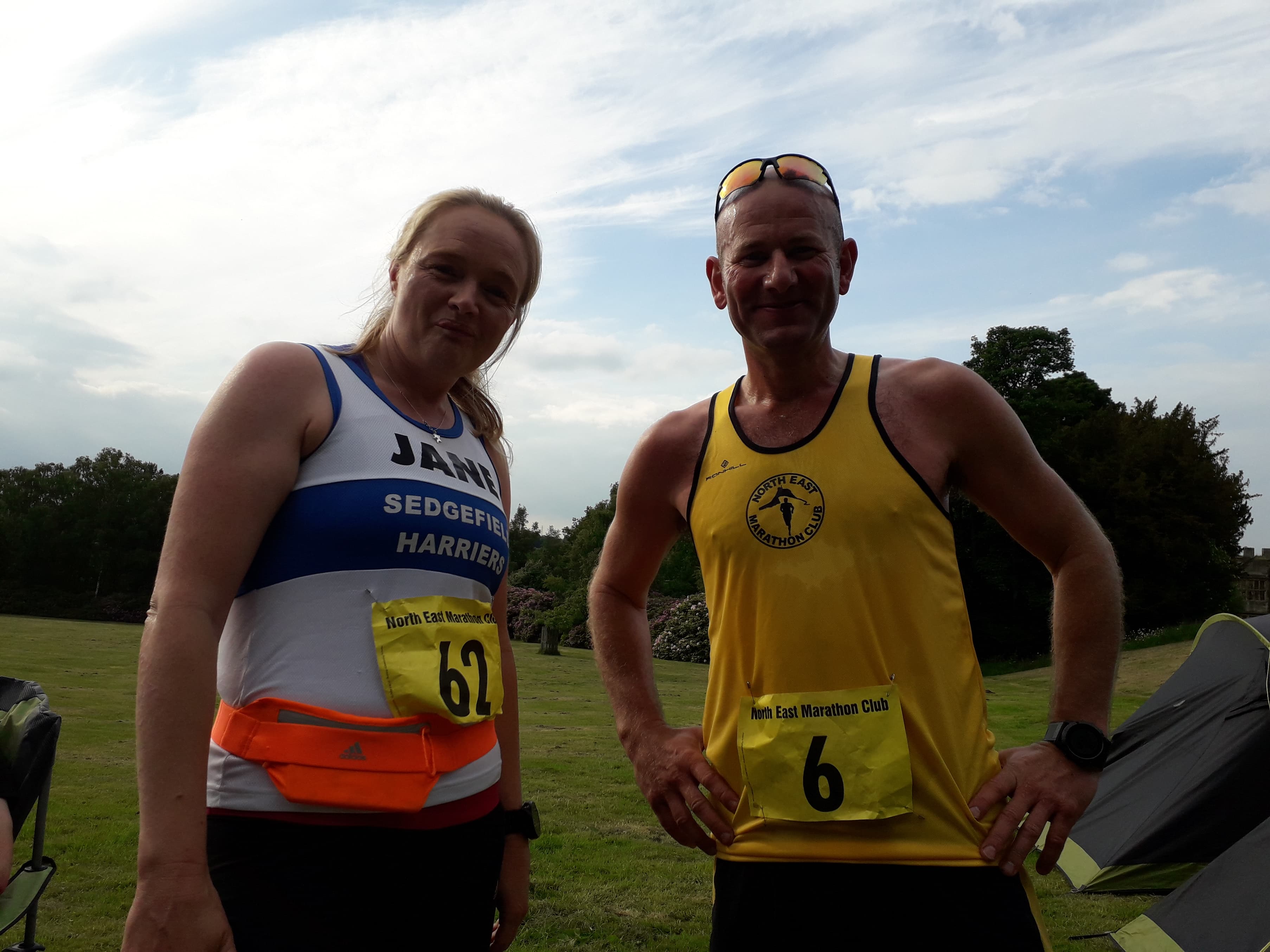 The big decision now was what to have for dinner, pizza was top of everyone’s list and Beth very kindly offered to go out and get it. Timing was not too great though; my third lap was due to start and no sign of Beth. Pete and Mark arrived back before the pizza so I headed out. Less than half a mile in I saw Beth Struggling under 10 pizza boxes and knew that it was going to be cold before I got back. It pushed me round though and I stuck to the markers I had planned from the previous run. Even slightly cold the pizza was worth the wait. 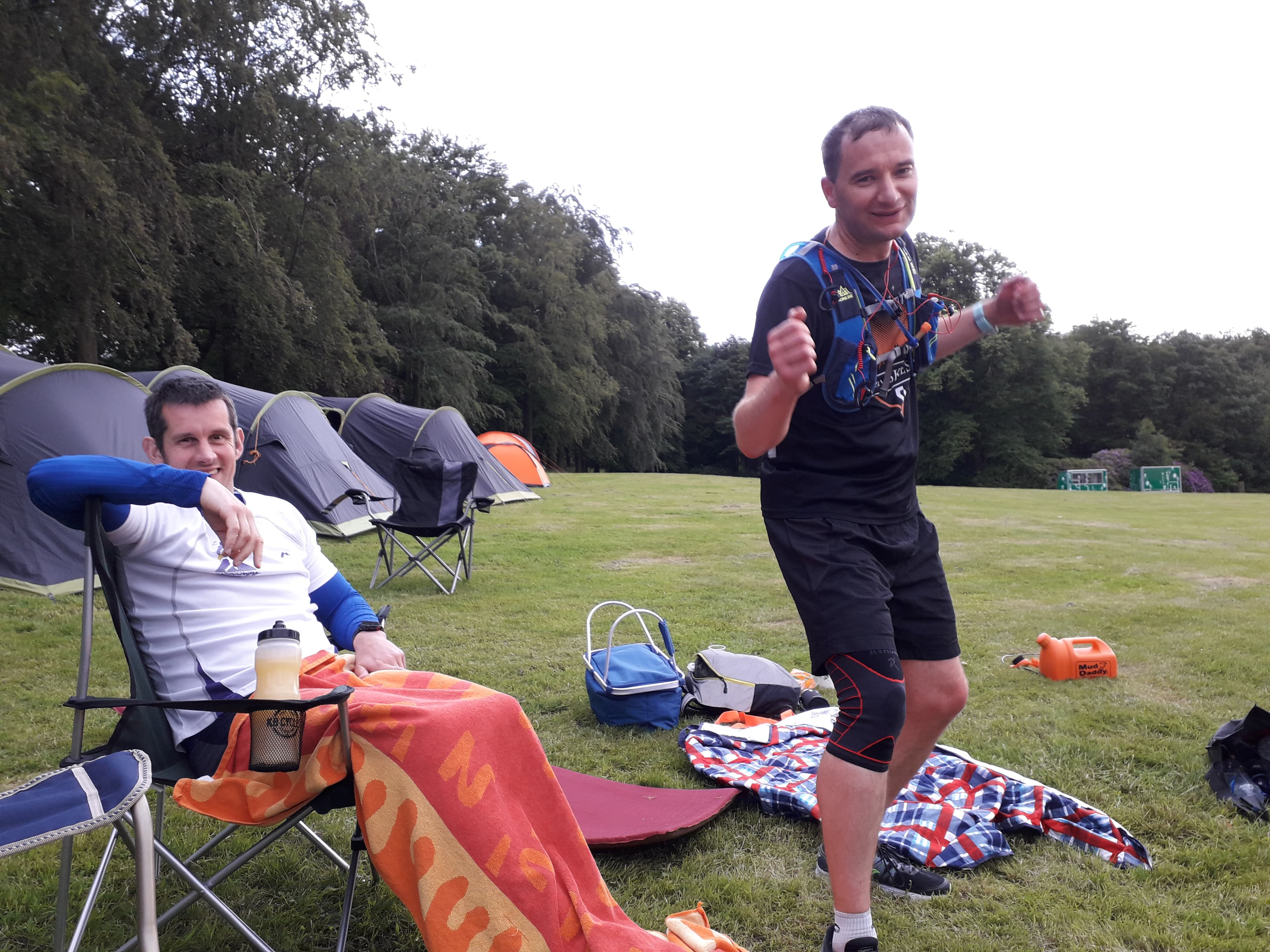 During this rest, night was starting to descend. Our supporters had vanished and marathon runners were starting to finish. Waiting in the dark it was very hard to tell when Mark C was coming in. All runners look the same in the dark with a head torch on. Ray and Jane finished their marathon while I was waiting and then Mark arrived. Off I went with head torch on. It was dark and a bit misty which gave the course an eerie feel. Hit my markers but was a bit slower on this lap. Mark R was a welcome site at the finish as was the knowledge that I would have about 6 hours off before my next run. We were switching to double laps for the night to give a bit more rest.

Change of clothes, food, a quick wash and then try to get some rest. Tent was too warm and was feeling a bit claustrophobic so moved my mat and sleeping bag outside. The night was nice and who doesn’t like sleeping under the stars? I managed about 3 hours of interrupted sleep and woke as Mark C started his two laps. I counted that I would have about 1 hour 40 mins before I was to run so a couple of slices of cold pizza and a cup of tea were in order. 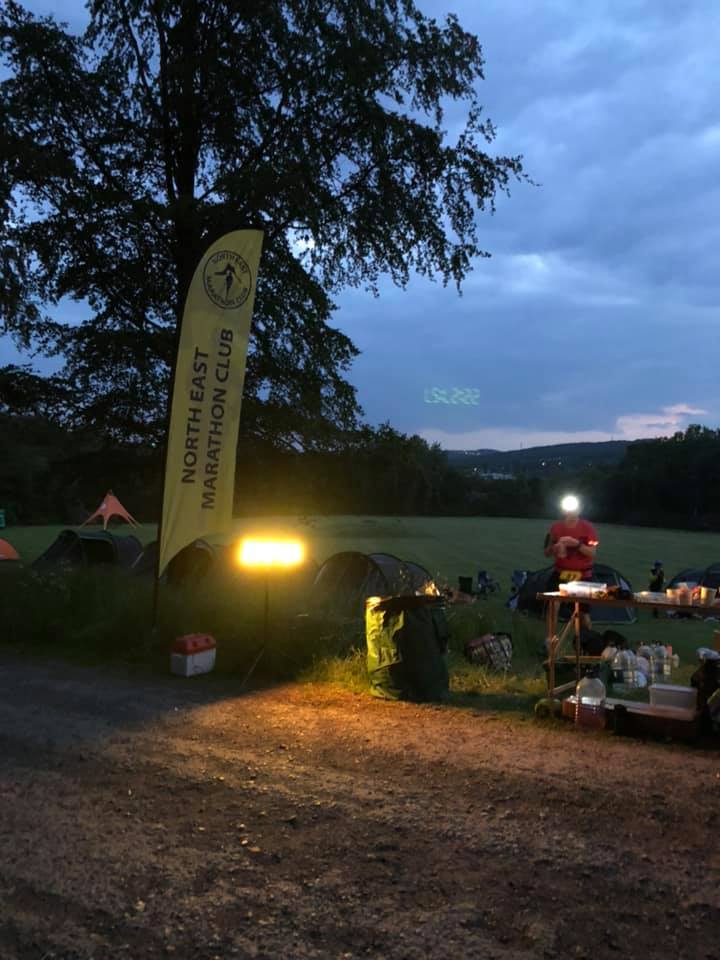 The double lap was hard. There was enough light that I did not need a head torch and it was cool to run in but going past the start and keeping going seemed wrong. The second of the two involved a bit more walking. The course was quiet at that time and I hardly saw anyone else. A chat and walk with Harrier Ben Smale kept me going (He was starting to struggle at this point having not really stopped for 18 hours) on lap two and there was a small deer on the track, my reaction time allowed it to go before I got the phone out for a selfie but it was nice to see. Mark R again a lovely sight waiting at the finish to get going. 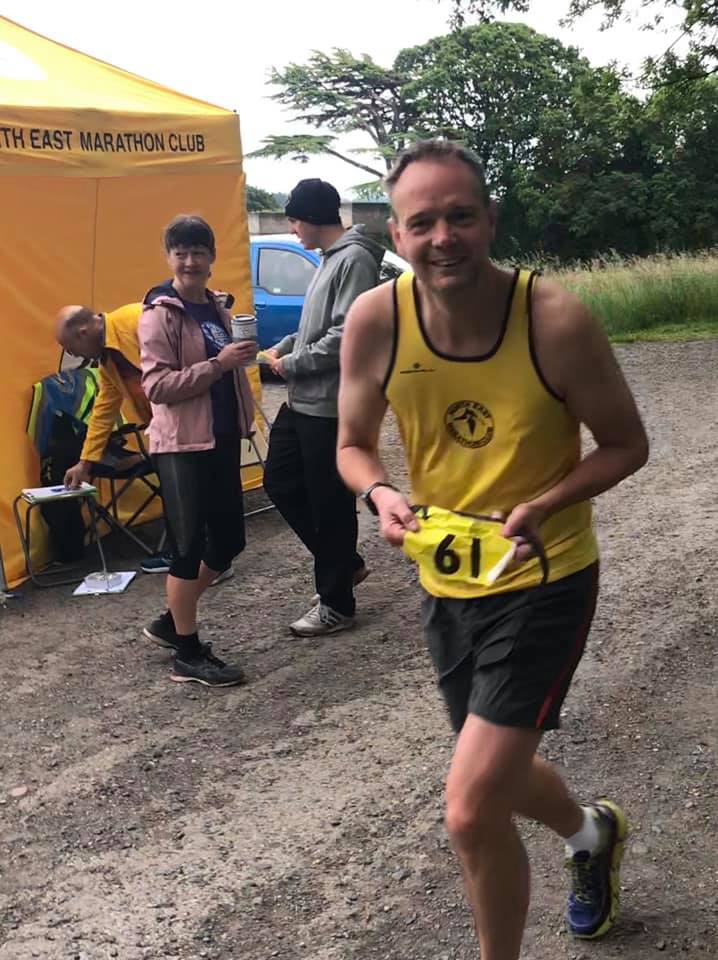 Bit of a rest and some porridge but not much time before the penultimate run. Feeling OK at this stage and ran well on this one, only walking the two hills at the designated spots. Running into the finish waiting to see Mark for his last run, where was he? Stopped at the start line and looked down to the tents and there was a half-naked Mark with no shoes on. He seemed a bit flustered but then put in the fastest lap of the team, an amazing 31:38. 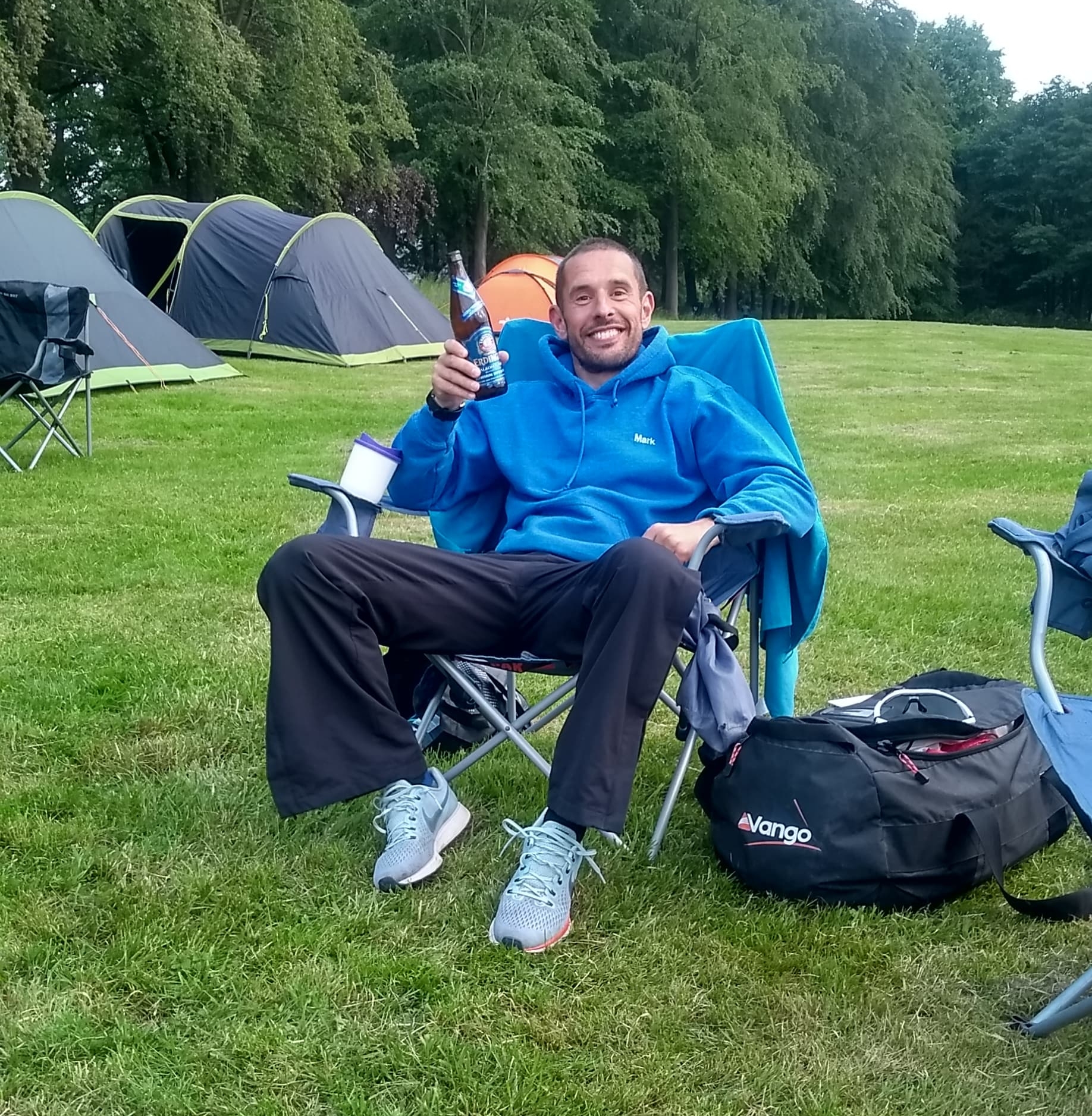 At this point I was starting to feel a bit ropey. Sitting around waiting was not good and I could not eat anything. Last lap of the course with about 55 minutes to go. Mark C and I were running together and Beth decided to join us. Started off fine. Beth sprinting ahead and stopping to take pictures, me slowly learning the true meaning of hate. Both Mark C and Beth were spurring me on up the hills but after the last steep climb I was done. Decision time, try running and not make it or walk back. Sense prevailed and I let Mark and Beth go on ahead. Coming along the last bit, one by one the team came back to drag me across the line and I even managed a short jog on the final straight. Thanks Team. 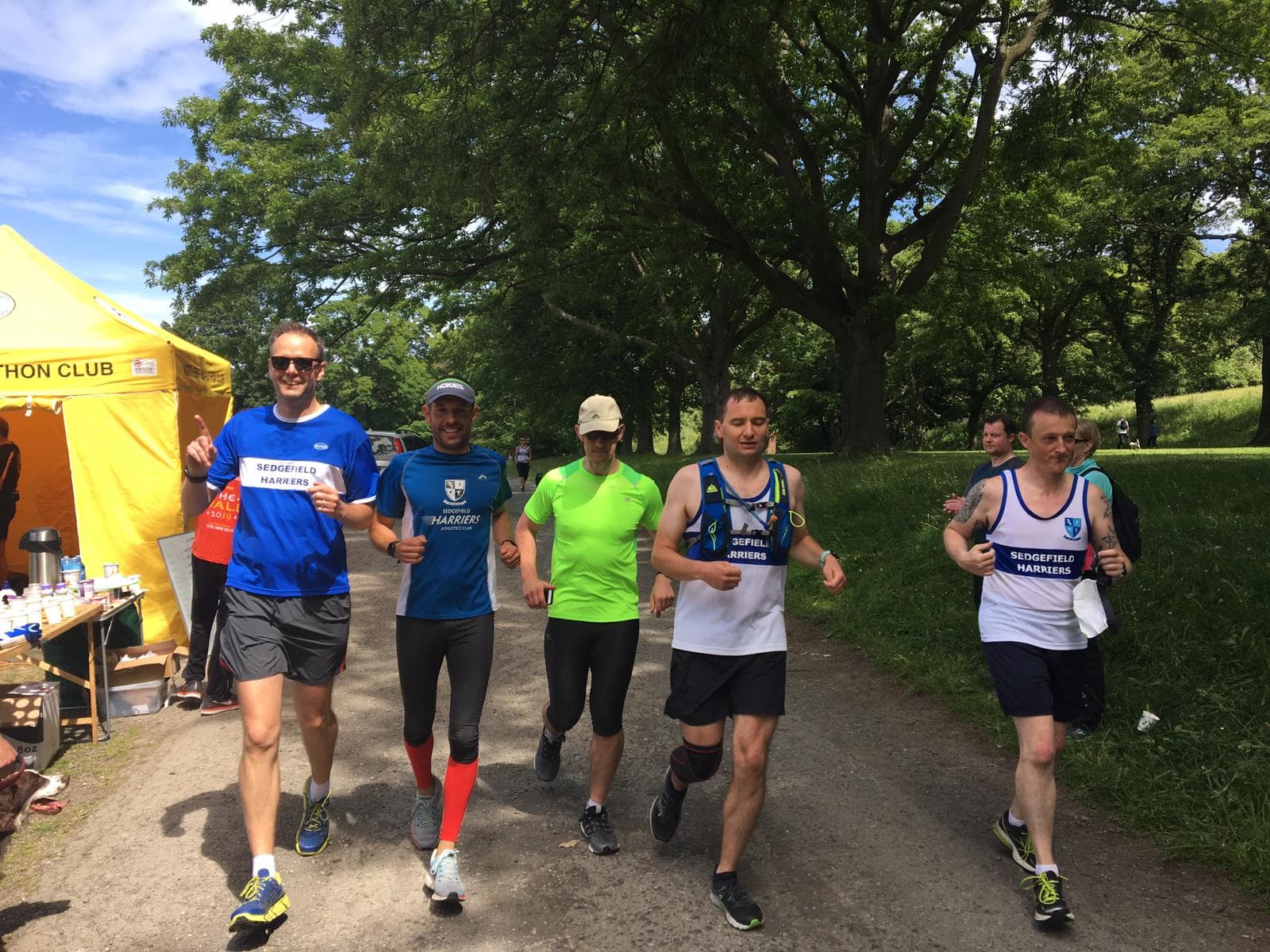 We celebrated with some Champagne but the thought of tidying up was too much and getting all the stuff back to the car required a bus. Champagne did not stay down for long and I was asleep in the car before we left the car park.

Would I do it again? Don’t tell Emily but Yes, It was a great weekend, helped a lot by the weather and the company. A very social run and I would recommend it to everyone. 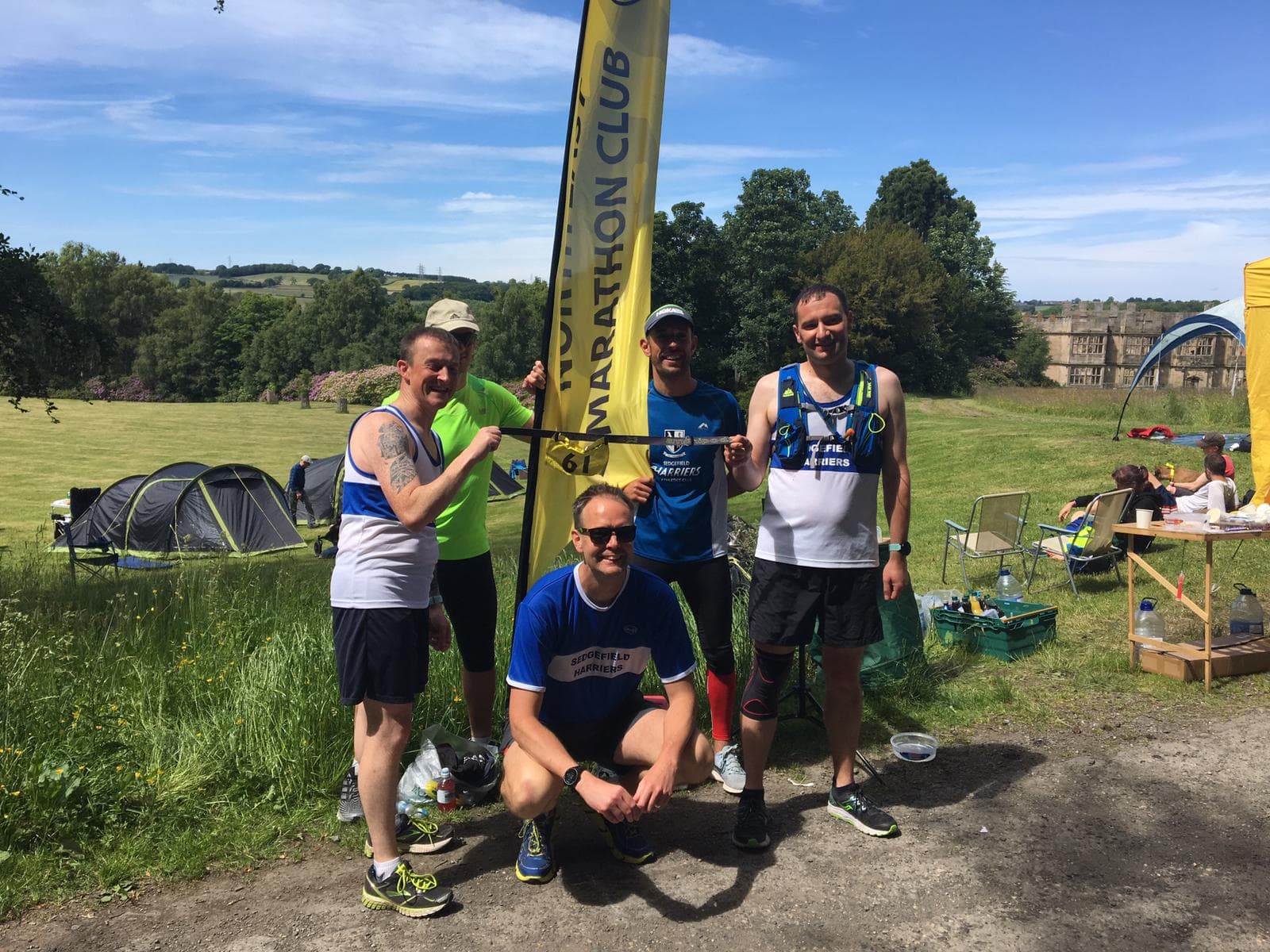 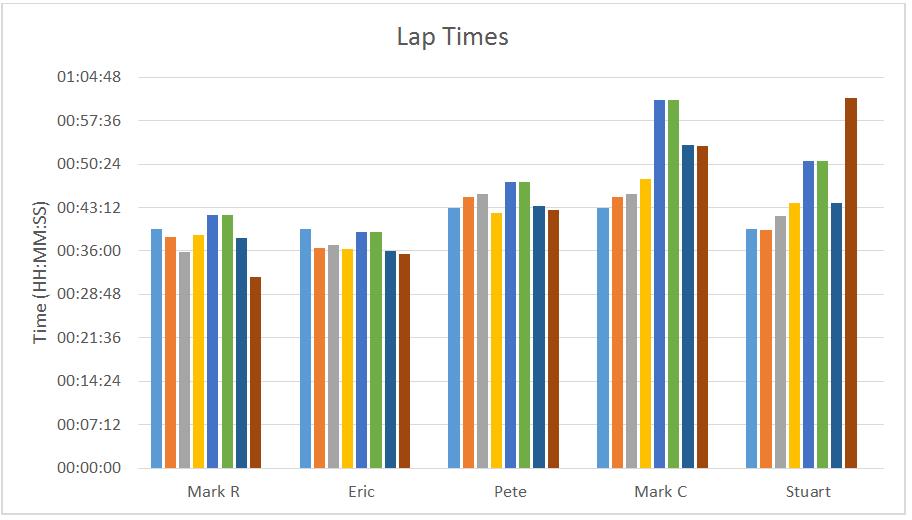 Finally, a word about Melanie Horan from the Marathon Club. She was the only one of the solo 24 hour runners to keep going for the full duration. She completed 100 miles, 25 laps, with three seconds to spare. On that course – very impressive. 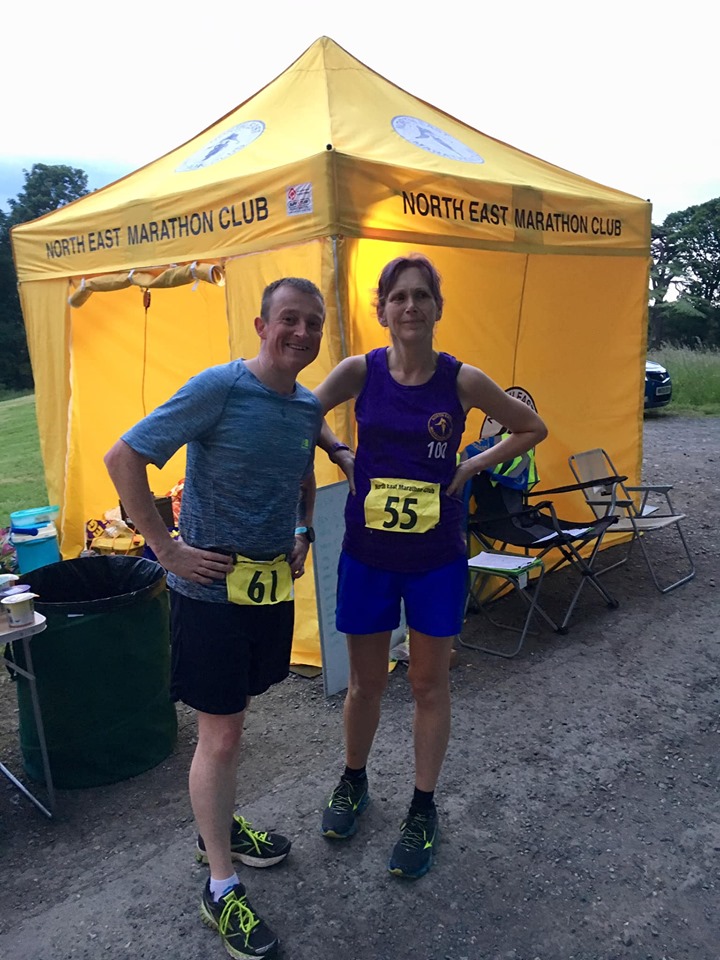 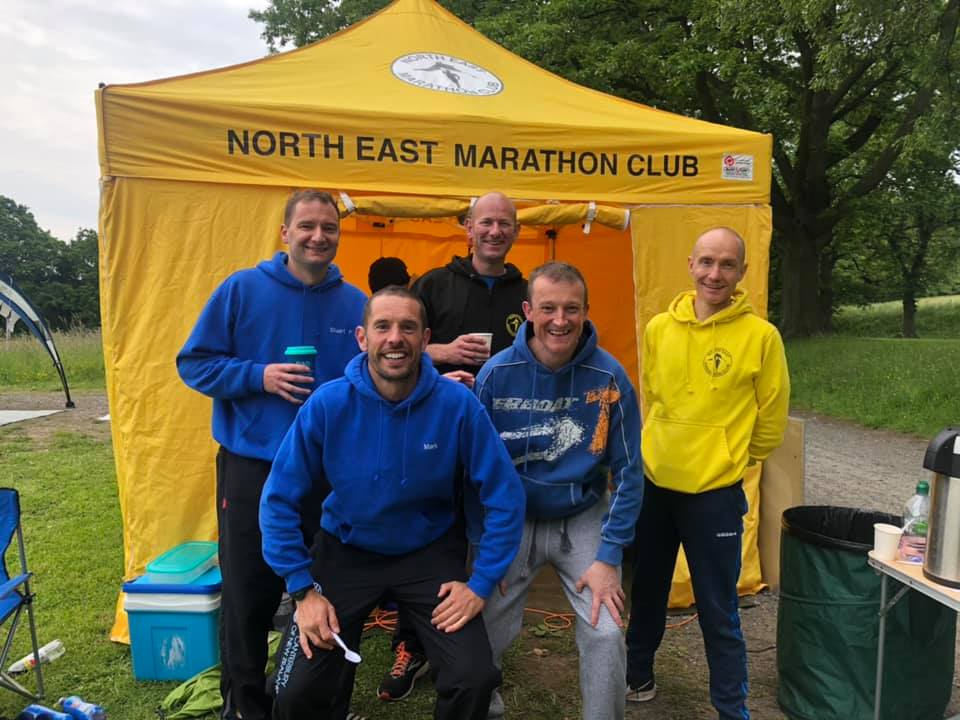