Since the corona virus mitigation measures had put paid to my afternoon sitting in a cold, half empty football stadium I took the opportunity to complete a cross country race around Lambton estate in Chester-le-Street. My third XC in about 30 years…

Big thanks to Ray Carmichael for driving myself, David Walker and David Bentley up there and finding the entrance (which apparently had eluded many others). I managed to squeeze into the back seat along with David B and a large carryall with half a dozen pairs of running shoes. He justified the large selection with a great quote ‘bring all your weapons to war!’. Can’t fault that logic and it definitely paid off later for DB!

Anyway, back to the Lambton Estate. The course is 3 laps totalling approximately 11km and we arrived in good time and met up with the rest of the Harriers. On the way into the car park we saw two muddy sections of the course, spikes we all thought. It was overcast and cold with a light breeze. After a reccy of the starting area we saw a fair amount of tarmac and other runners suggested trail shoes were definitely an option.

But this was a race with XC in the title and I had invested for spikes for XC, I was wearing them!

David Walker said he was planning on just ‘tootling’ around as he had the Thirsk 10 the following day. I was also doing that race so the ‘tootle tactic’ sounded perfect. Ray C also said he was taking it easy, great I thought I’ll just follow these guys.

As the slow pack huddled at the start there were shouts of ‘No Coughing’ and ‘Spread out, 2 meters apart everyone please’… The race started and we set off into a slow shuffle around the opening bend. So far quite muddy, spikes a good choice! Within about 500m we came to the first ‘track’ which was hard standing, spikes not great! I opted to head onto the verge where I stayed for majority of the lap. The course descended down a steep tarmac road (I’m on the verge again), I nervously crossed this before heading down a steep tiered grass bank, this was more like it! The spikes allowing me to speed up a little while the course headed to towards the banks of the river Wear. Then it was another tarmac/cinder path, and onto the verge. I was keeping pace with Ray and David but I had obviously misunderstood the meaning of tootling….They were going at a fair lick on this first lap!?!

The highlight of the course is the long hill back to the estate. It starts gradually but has a really steep finish and turns a corner into a shallower climb for another hundred metres or so; that final little climb really takes it out of the legs. The spikes were again great for this hill. The last third of the lap was also great for spikes, muddy paths and big puddles which saw other runners fighting for drier edges. I loved ploughing on through the middle. It was around here where we reached the fallen tree. There were only 2 routes, either around the edge jumping over the trunk, less muddy, or under the tree through a bog… Easy choice, XC shoes, through the mud! 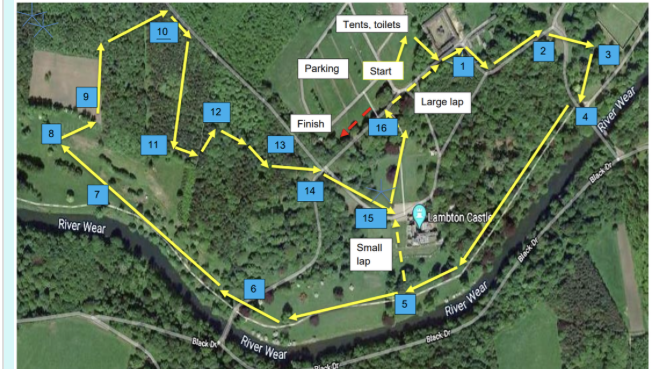 As I rounded the final bend you were separated from the spectators at the finish area by a wall. It was a nice feeling to emerge through a gate and have the crowd cheering. Big shout to Chris and Sue cheering us on.

By now David W had tootled into the distance, Ray C was just ahead of me and I was trying to keep up. After more zig zagging across the verges we were at the hill again… This time I went a little too fast and ended up having to walk the steepest 20m or so.

The 3rd lap as ever in these XC events was a real challenge but I managed to keep pace with Ray until the last mile or so where he found another gear. Heading through the gate the last time was a fantastic feeling, great noise from the crowds really spurred me on to produce a sprint finish (of sorts)!

Overall spikes were probably not the best choice of footwear. Next time a decent reccy of the track and listening to other runners advice is required! 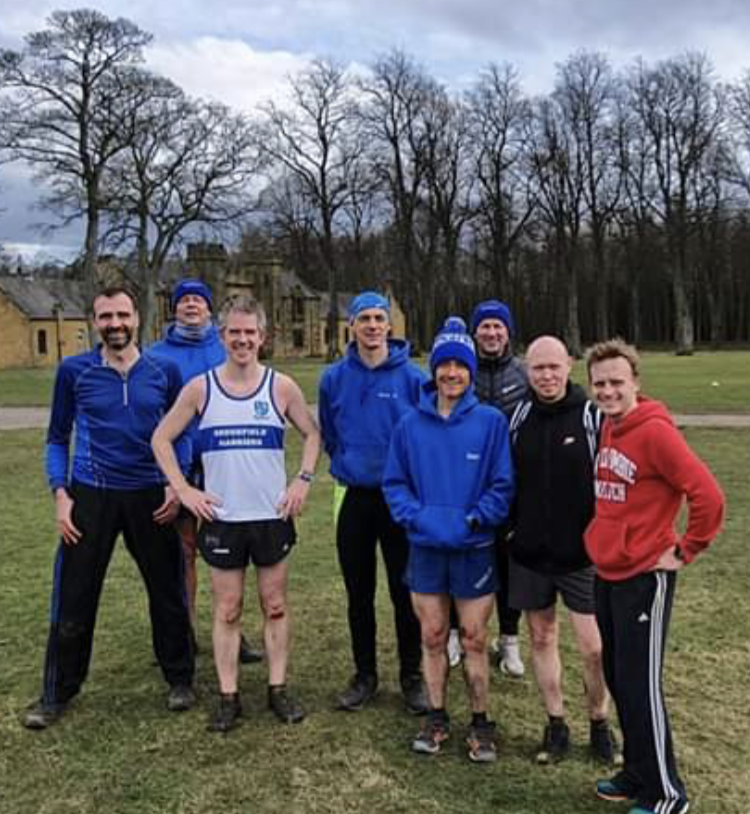 I was chuffed to bits with a 10k record time on Strava and beating an old school friend. There were some great Harriers performances leading to a 3rd place finish for the team.

David Bentley’s shoe selection must have aided a tremendous 12th place overall and 4th in the division.